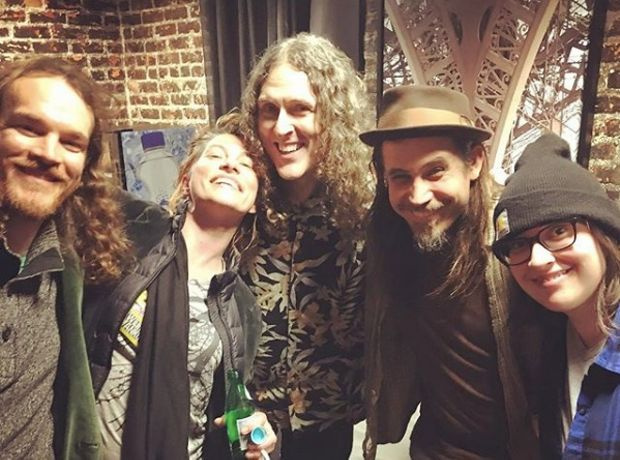 last night was my last ash-free night in what wound up being a beautiful, beautiful week-long string of ash-free nights (thanks neil) in new york city chock full of plays and plays and musicals and going out pretty much every single goddamn night to take advantage of the fact that for the past three years i have barely done fuck all in the nightlife & going-to-see-other-peoples-art department. (while i’m at it, if you’re in new york, here’s my theater review hat: RUN don’t walk to see hannah gadsby’s “nanette” at the soho playhouse… it’s only playing briefly. don’t read any reviews, don’t even look at what it is or isn’t “about”. just trust amanda and GO. go go go. you may weep, it will change your life, etc. also, if you want to be stunned and astounded, go see derek delgaurdio’s “in and of itself”, part magic, part you-may-weep.)

to research and inspire ourselves, jason and i went to something almost every night, and last night we went with hayley and michael to see our long-time hero, weird al yankovic. i can’t remember if i’ve blogged about al before (jason and i also went to see him a few years ago in northampton), but in the “how did i miss this massive influence” department a la judy blume, i sat there last night really gobsmacked at what a huge impact this one guy had on my life and songwriting.

jason and i have bonded over our love of many things, but it may have been our mutual love of weird al (more than leonard cohen, more than neutral milk hotel) that sealed the deal on our life-long friendship.

we reached out to al way back in 2010 when we were making the “evelyn evelyn” record and he was such a sweetheart…he agreed to sing on our bad-eighties-parody-song “My Space” (along with a whole host of other random people, as you may remember), and then i got to make actual friend-friends with him a few years ago at a conference we were both attending. he is the nicest. man. in. the world.

a few years ago, jason and i were both in australia and we had tickets to go see weird al and his band in concert in adelaide, but i wound up having to leave the continent early, so jason went to the show alone and got a bite with al the day after the show. they chatted about how it was rare for al to tour outside the states because the show is such a massive undertaking, his stage show is usually production-heavy, with film clips and costume changes (yes, he usually dons the fat suit from this amazing video for “fat”) and tons of Stuff. jason remembers asking al if he’d ever thought about doing a tour with, y’know, just his band. al seemed to think that was sorta impossible given what he was known for.

and now fast-forward about five years and we saw him on stage last night, KILLING IT, playing a totally sold-out, stripped-down show with his band at the paramount on long island… and, except for a fun little mash-up of parodies at the end, he only played his original material.

and i, being a card-carrying member of the weird al cult (well, there were no cards, but as a kid i bought and listened to every record he put out and had multiple copies on vinyl and cassette) went on a speed-trip down the memory highway in mere seconds, because all of these songs have been lodged in my brain since ever.

i can’t remember the last time i actually spun one of those records (i still have them all, but i almost never listen to… any music, ever, that’s a blog topic for another sad day) but goddamned if i didn’t still know almost every lyric to “one more minute”, “melanie”, and  “buy me a condo”.

some songs live on in your head and don’t leave. 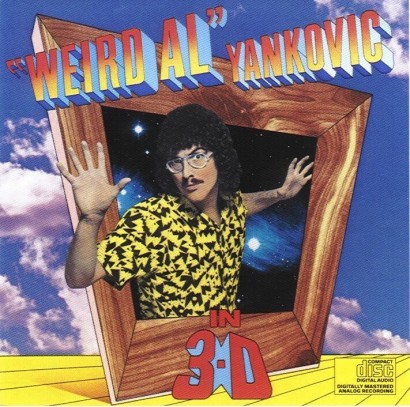 weird al’s records were usually a mix of about half straight parodies (like our beloved “eat it” and “i lost on jeopardy”s) and half originals, which were always “in the style of…” some genre or other; “buy me a condo” is a reggae as sung by a jamaican immigrant who’s making a bid for yuppiedom. looking back at me listening to all of these records (i would have been around 10 at the height of my weird al obsession) is so fascinating, and sitting there last night and watching him play all of these songs really did my head in, because i realized that it was WEIRD AL, not the B-52s, who introduced me to the “sound” of the B-52s, who themselves were a weird combination of things to begin with (surf/60s/psych/with a sprinkling of that weird thing fred schneider does with his voice). i hadn’t known when i was 10 that “mr. popeil” was a B-52s rip, because nobody had introduced me to the B-52s. for all i knew, it was just weird al, making these crazy-sounding songs.

and i hadn’t realized, either, that weird al (and to be very fair, weird al AND HIS BAND, because his band, who’ve been with him since the beginning, are a massive part of the genius-machine) introduced me to the “sound” of the police before i’d ever heard sting sing, before i ever bought “synchronicity” …it hit me when when they started playing “velvet elvis”.

music is so weird this way. what paths lead to what. 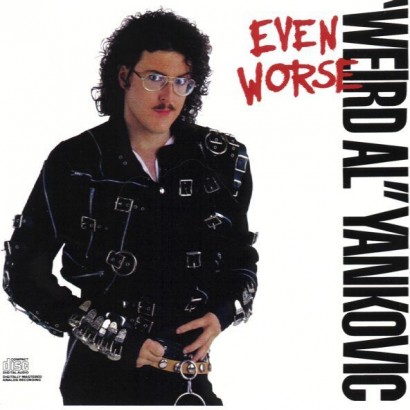 and the further down the rabbit hole of my own brain-song-influences i go, the more fascinating it is to realize how fucking important stuff like this is…

i’d never sat down to think about it, but those weird al records were like a crash-course, or, perhaps more like a survey course in ALL sorts of styles of music that simply weren’t in my record collection when i was ten, and i wonder if weird al, without really meaning it, knows that he stretched my mind-palate open to be able to accommodate new sounds and new styles that i otherwise wouldn’t have been able to fit in my narrow little mind.

at age ten, was pretty much committed to the sounds i understood: at the time, i think i had 14 records to my name and they were mostly pop-of-the-time… madonna, cyndi lauper, WHAM!, the miami vice soundtrack, that sort of stuff. and then my four weird al records.

which covered ALL sorts of different musical territory, from polka to metall-y hard rock to doo-wop to songs that sounded, y’know, like “synchronicity II” by the police, who i had never heard or heard of. i would listen to ANYTHING weird al put on a record, because he was funny and nice and i trusted him. plus his records never scared me (i was scared to listen to records that i “couldn’t understand”, the same way i was scared to read books that i “couldn’t understand”, and both of these things are still fucking true even though i’m 41.

weird al, i could understand. i mean: how could you not understand a man who makes an album cover like this: 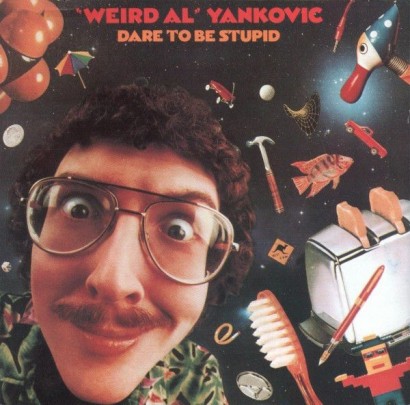 ALL of al’s songs are funny, joke-y, silly… he has endless rips of love songs that aren’t love songs and are, instead, hate songs… but without getting too intellectual about it from the exception-proves-the-rule kinda department: a parody of a style teaches you the essential ingredients of a style. all of those songs i was listening to over and over and over were teaching me the ground rules of how people write love songs (and one step further, how a songwriter can make fun of those love songs).

there’s also something huge to be said here, and i don’t know quite how to say it, about the physical (and therefore limited, don’t forget how few records i had) album format vs. singles/internet/streaming format that led me to sit with and digest these weird al song-collections over and over and over again that i think just wouldn’ta happened if i’d been ten in the internet age. i dunno.

one of my first songs that i wrote at about age fifteen was called “the coffee connection”. it was a doo-wop song about the drug-dealers and hipsters (we didn’t have that word yet, children) who hung out at the local coffee shop in the center of the town i grew up in. the coffee connection was bought by starbucks when i was in high school. i tried to adjust the song to accommodate the new name, but it just wasn’t the same. and it was all pure weird al. so is “oasis”. so is the vast majority of “evelyn evelyn”. every song is a parody of a genre. we owe it all to weird al*.

and so, a la judy blume, i gotta take my hat off to this man who influenced me even more than i’d realized until last night i sat there stewing in the juices of all this music and all this thinking. just like judy… weird al could have never existed. i don’t take for granted that he picked up his accordion one day and decided to write silly songs that would make people laugh. he could have just as easily not done that, and then there would have been no weird al, no songwriting teacher, and who knows what would have happened to my life.

you’re so much more than a funny parody artist, even though you’re great at that.

and you’ve changed the life of this songwriter, and, i’m sure, thousands of other songwriter who trusted you when we were little kids… by teaching us how to make music that would make people happy. 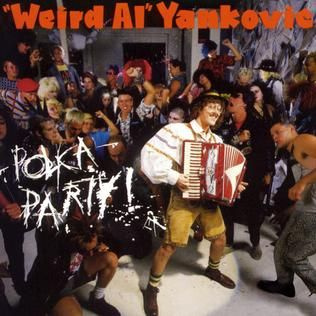 oh and i also forgot to mention in all of this messy story that weird al actually invited me to sing on his last record, which was a huge honor and you can now see why. it was a song in the style of the pixies and i got to sing the kim deal part

it’s called “first world problems“ and you can feast your ears on it here: https://youtu.be/bwvlbJ0h35A

p.s. to all of my beautiful patrons, i’m heading home to upstate tomorrow and the team is going to get cracking on all of the new tier stuff i keep promising you. hold tight and stay tuned and all shall be revealed….

*okay okay and a little bit to tom lehrer, one of my other huge songwriting/parody teachers.

i did back-ups on the new Weird Al record! now I can die.

to sydney. and a reminder from a yoga teacher.