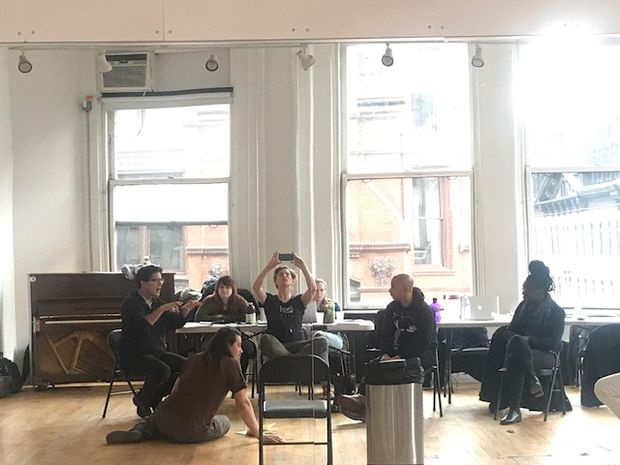 first of all, WELCOME to all the new patrons. there are a large handful of you and since this is always a rolling party with no beginning and end it always feels weird to be saying hello hello hello to the new people, but HELLO TO THE NEW PEOPLE!!! it’s wonderful here, thanks for being here, have a drink, love your face, etc.

now, ahem, i have a big thing to tell you.

after being away from “The Theater” (better if you pronounce it VERY loudly and with a british accent and a scarf being whipped about your neck: DAHLING!!!! THE THEAR-TAH!!!! ) for the better part of four years , i am beyond excited to make this announcement….

i am working on a brand-new original stage show (so important that it is in bold) with two of my favorite human being artists: jason webley (my twin sister from evelyn evelyn) and steven bogart (with whom i developed “with the needle that sings in her heart”, he also directed me as the EmCee in Cabaret at the american repertory theater back in 2010).

we are in the midst of a five-day workshop right now at the public theater in NY….a fantastic organization. they’ve been behind the creation of some astonishing productions from A Chorus Line to Hamilton. if you’ve seen me at joe’s pub (where i’ve played countless times) – that’s a part of the public theater building/family. and now, together with four actors, we are digging, talking, moving, trying to figure out what this show is, what it looks like, what it sounds like, what it will be.

this is our delicious workshop space in midtown manhattan: 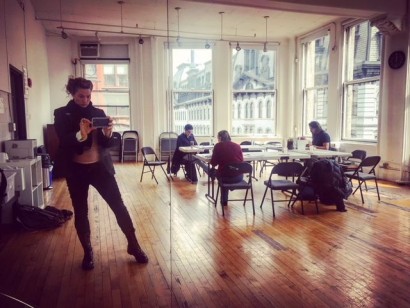 there are threads and threads of ideas and they are only just started to be sewn together and patched into something that might look like something Real. this is always a frightening process, and unlike a lot of stuff in my career which has only gotten easier and easier and i only get more and more confident (like, say, playing piano on a stage to a room of 2,000 people, it’s a snap at this point), theatre has gotten harder for me, and more elusive.

it will probably take more than a year to build this show, whatever it is going to be. maybe longer. it’s mind-numbing to think about.

i just started writing a short history of my relationship with the theater and got 1,500 words into it which only took me through 8th grade. and i’m supposed to be working on our show right now. so i stopped, and i’ll tell you later how important my love affair with the boards is, and how the roar of the greasepaint and the smell of the crowd is my first true love. for now…i need to get back to work, because people are waiting.

but i wanted you all to know that i’m doing this, and MORE IMPORTANTLY, and because you may always leave it to me to be honest and crass about the business of art:

the only way i am able to afford to do this project is because the patreon exists.

there is almost no money in creating work like this…it’s just the way theater works. the entire amount of money that i will have been paid for a year or two worth of work on a show like this (unless it achieves Hamilton-like proportions, which given how weird our shit is, is wholly unlikely) is about the amount that i would make playing a single solo show, on one single night.

so why am i doing this?

because i FUCKING LOVE THEATER, goddamit darlings. because literally i have been creatively happier this week than i can remember being in a long time…to wake up at 8 am, to grab a coffee, to stretch my body and void with a room full of creative, whole-hearted theater weirdos, and to sit and think, argue, write, and let my brain expand and contract over and over and over again as we try to collectively sculpt a gigantic, beautiful, theater-monster is literally my idea of fucking heaven.

but because of the existence of the patreon, i am able to do this, to take this time, to grow this project slowly, to bathe myself in the juices of a weird “something” that may not even come to fruition for over a year (or more)…and i feel so grateful that i have this support structure.

i’ll be giving you guys everything i can from the process, without ruining the delicacy of the project or process, which is a strange line to walk on. there are already songs that i’ve written that i don’t think are actually going to fit into the project which are beautiful and strange and now floating detached from their source…possibly to float into the studio with me to come out of the pipe into a different river of song. i dunno.

i know that i am one goddamm lucky artist when ART (the songwriting, and webcasting, and podcasting that i am doing on the patreon) is my fucking DAY JOB so that i can do ART on the side (this insane theater project), you know? i am, as i sit here, feeling grateful as fuck.

here are some photos from workshop-land. the four actors we’ve been working with won’t be totally unfamiliar to you: one is kedian keohan, they were in the bed show production. one is chris wells, you may know him from secret city, or more likely as the man who played “trump” in the “mother” video. obehi janice came via bogart, she’s an incredible writer and performer who bogart knew from boston and she’s in the emerging playwrights program at the public. and lastly, jonas woolverton is back on the scene…many of you will know him as the one with the giant WHEEL who toured with the dolls as an opening circus act for a while. he’s been with cirque du soleil in vegas for ten years now and he snuck away to do this project. it’s a phenomenal cast of people and i cannot wait to tell, show, share more. 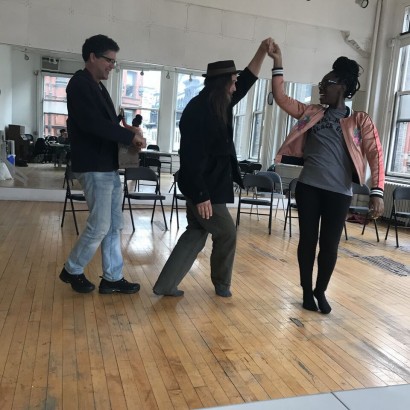 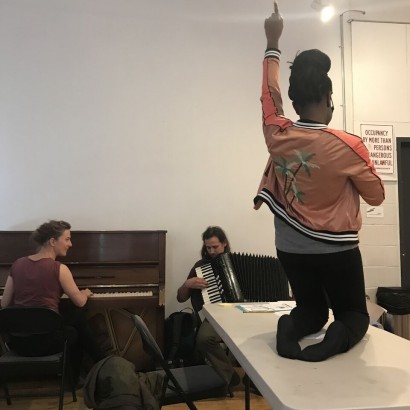 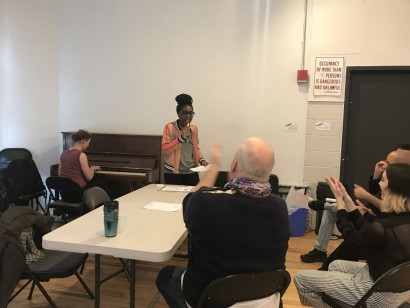 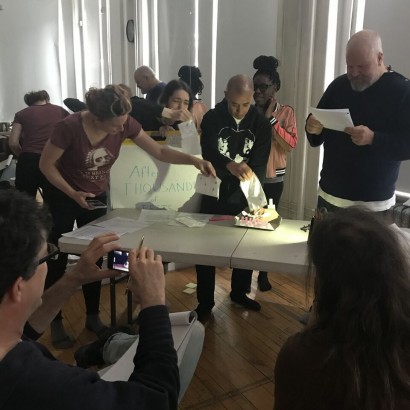 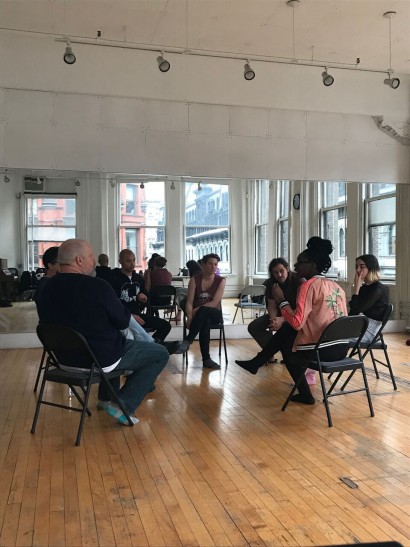 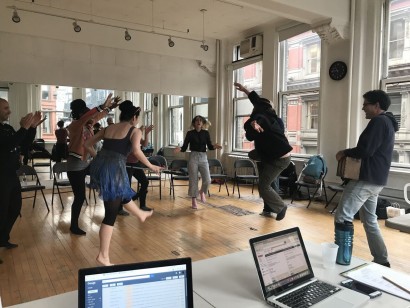 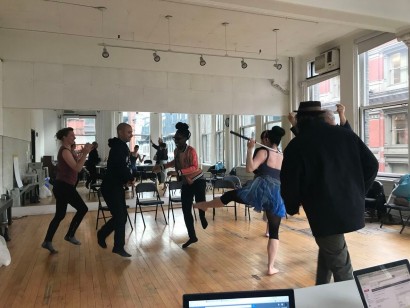 and this is laura and kate. behind every act of large-group creativity, as usual, there is always admin. they are our angelic workshop stage managers

they take copious notes. (they also spy on us and tell people when we are late to rehearsal, so watch it.) 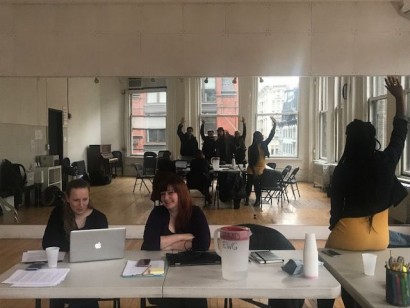 here we are, EATING NOODLES. 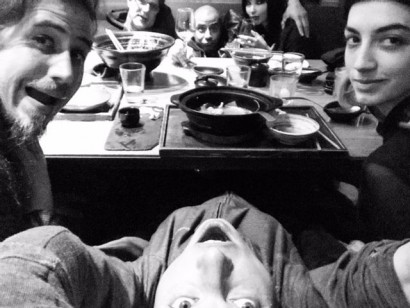