my open letter to the daily mail

the daily mail is a british tabloid newspaper. this was their coverage of our set at glastonbury festival:

this is my response – with thanks to steph & rhiannon for recording & sharing so quickly* – live (july 12th 2013) at the roundhouse in london:

and, well, holy shit….one day online and the original upload of this video‘s gotten over 234,000 views…and no response from the daily mail.

but it has been tweeted by imogen heap, caitlin moran, wil wheaton, russell brand, robert llewellyn, and thousands of other awesome people.

are we the media?

it would appear so.

and by request, here are the lyrics. i didn’t have them typed out since i hand-wrote them (and i tossed them into the crowd when i was done)

dear daily mail,
it has come to my recent attention
that me recent appearance at glastonbury festivals kindly received a mention
i was doing a number of things on that stage up to and including singing songs (like you do…)
but you chose to ignore that and instead you published a feature review of my boob

dear daily mail,
there’s a thing called a search engine: use it!
if you’d googled my tits in advance you’d have found that your photos are hardly exclusive
in addition you state that my breast had escaped from my bra like a thief on the run
you do you know that it wasn’t attempting to just take in the RARE british sun?

dear daily mail,
it’s so sad what you tabloids are doing
your focus on debasing women’s appearances ruins our species of humans
but a rag is a rag and far be it from me to go censoring anyone OH NO
it appears that my entire body is currently trying to escape this kimono….

dear daily mail,
you will never write about this night
i know that because i’ve addressed you directly i’ve made myself no fun to fight
but thanks to the internet people all over the world can enjoy this discourse
and commune with a roomful of people in london who aren’t drinking kool-aid like yours

i keenly anticipate your highly literate coverage of upcoming tours

dear daily mail,
UP YOURS.

a fun note: a magician never reveals their secrets, but i’m a musician, and happy to reveal mine.
the start of the melody / the waltz was a DIRECT rip from the “waltz for eva and che” from EVITA.
weber and rice, sue me…it’ll make this even more interesting.
(but seriously, i love evita, this record was one of my fucking favorites growing up.)

p.s. here’s a picture from glastonbury, via @michaeleast: 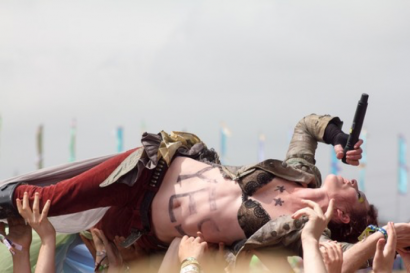 also, there were multiple requests for a list of the special performers at the gig last night…here goes:

PERHAPS CONTRAPTION
bonus points for launching a video right before the show: http://youtu.be/g3qKjvlLd6Y

JHEREK BISCHOFF
part of the grand theft orchestra…this is his new video with DAVID BYRNE: http://youtu.be/dkHuhr9MDlc

THE SIMPLE PLEASURE
the one, the only, CHAD RAINES. grand theft orchestrian, the best dude…dance your ass off to their new album. you can grab it at a show or on bandcamp.

TOM MILSOM
here we are, practicing backstage last night for what may’ve been the sweetest ukulele duet ever played in the town of london.
and here is the video for “pipes”: http://youtu.be/q0_I8u36TgM

BITTER RUIN
FUCK yes. we played secret ninja gigs outside the roundhouse after the show. that’s how it’s done peopleeee…here’s their video for “trust”: http://youtu.be/MUhukCO7li8

KATE MILLER HEIDKE
a live clip of the song she did, “are you fucking kidding me?” (the “facebook” song): http://youtu.be/S7MuwPlOiNQ

SXIP SHIREY
the only, the only…SXIP! he’s in london for his circus show “LIMBO“…go! he played the song “i live in NYC” from this album: http://sxip.bandcamp.com/album/sonic-new-york
allllll sorts of info on his show/tickets can be found here. it runs at the london wonderground through 29 september…don’t miss it!!!

Amanda Palmer Fights Back Against the Daily Mail

the Dear Daily Mail nudie pen! get em while you can …

an open letter to sinéad o’connor, re: miley cyrus.