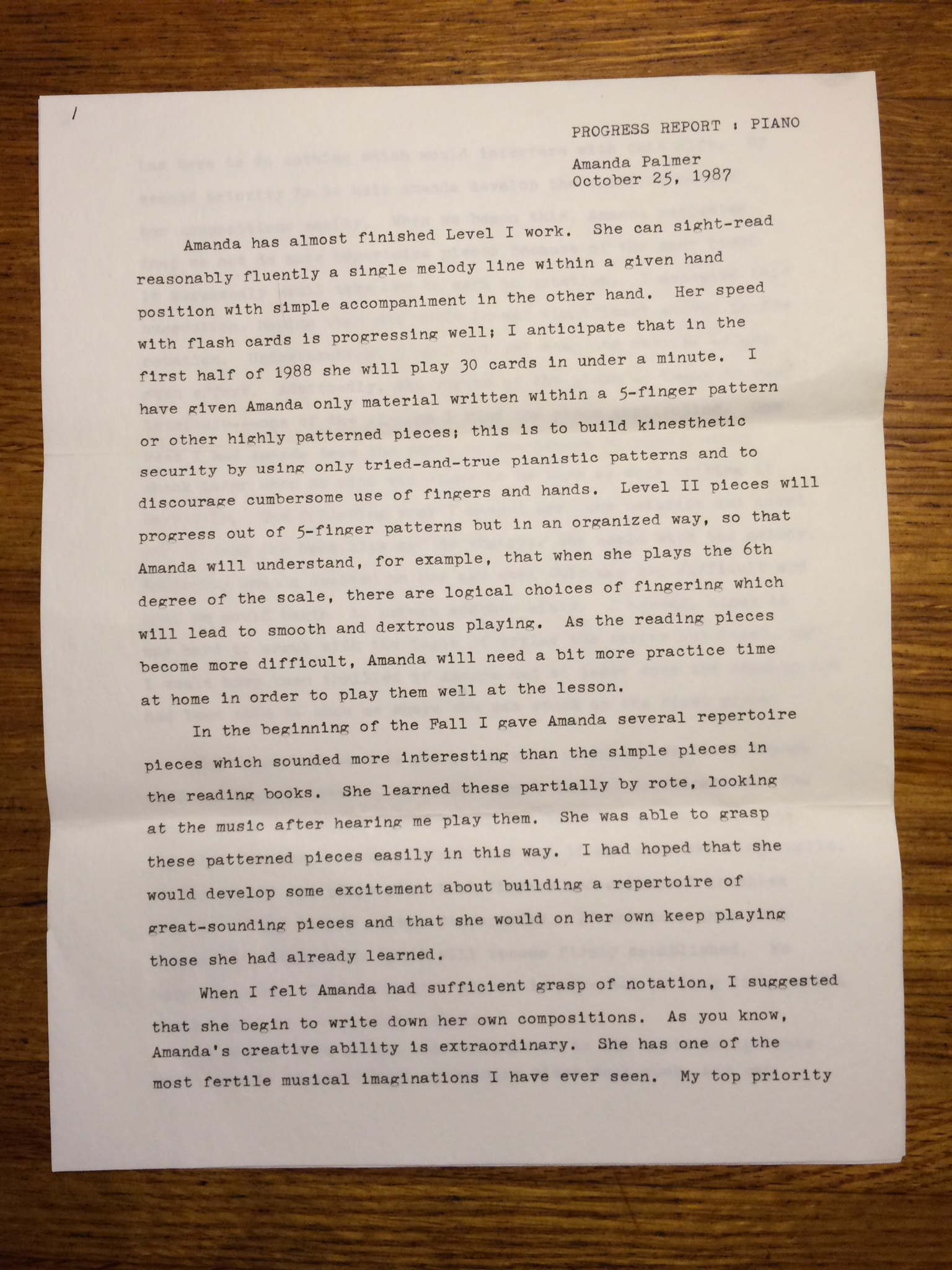 the 12 days of AFP-ness continues.

here it is, a three page letter:

this one is an anomaly.

ahem. so my mom has been what she calls “deep cleaning”…going into the files of Yore, and she found these three sheets of type-written paper in her backfiles.

i’d no idea this existed….it’s a progress (or non-progress?) report of sorts from the piano teacher i had for three years from about the ages of 9-11 in lexington. it was a rough ride, that era. the teacher, jane winchell, was a respected classical-type piano teacher on the other side of town. i would walk to the center of town after school and take the lex-press bus (no shit, it was called that, and still is, i think) to the other side of town for 75¢, and then walk about a half mile or so down a country road to her house, which i remember well. it was a single story house with a large lawn, and i would amble over the lawn, sit on the chair waiting for the previous student to be done, and then jane would come for me. that was the moment i dreaded, because i would be confronted with THE PRACTICE BOARD. the practice board was my worst nightmare. there was a box full of stickers, and you were supposed to pick one, and if you’d practiced, you got to proudly put a sticker into a little box in a column where your name was.

i don’t know what kind of musician i may have turned into, what variety of genius ben folds or tim minchin or liberace or elton john or tori amos style classical rock-genius i may have been able to present you with….but i just did not have it in me.

i hated practicing more than i hated, like, i don’t know. i am going back to my eleven year old self and i can’t think of anything i hated more.

mind you: i loved PLAYING. i played all the time. i played the shit out of my parents piano. i banged away happily, i learned songs i knew from my record collection and from my sister’s record collection and from tapes lovingly recorded while hanging right next to the TV while MTV blared along, i mean, i even learned to play the moonlight sonata by EAR by playing a tape next to the piano and pressing play and pause and play and pause hundreds of times (AND THE PIANO WASN’T EVEN TUNED TO CONCERT PITCH. WHICH MEANS I LEARNED IT A HALF A STEP DOWN FROM THE ORIGINAL, WHICH MEANS I AM TRAUMATIZED FOR LIFE).

but i hated fucking practicing. i really did.

i also hated the metronome.

i hated it more than i hated practicing. if practicing was the cross, the metronome was the nails, dude.

the metronome was tall and green and plastic. i once threw it across the living room. i was not a violent child. i’m not proud of that act.

but it broke, and i don’t think my mother bought a new one.

jane taught me the basics and tried hard to get me to practice. she was never cruel, just gently encouraging, and, as you can clearly see form the letter, frustrated. i was just such a pain in the ass. my mother was paying her to teach me to read music and play nice classical pieces and i was like NO NO NO NO NO WHY?

and it wasn’t her job to try to motivate me to want to play classical music and learn how to read. it was her job to teach me. but i really had no desire to be taught.

this is a good moment in the story to thank my mother. for everything. i thanked her on the phone earlier today for sending over the photos, but she also deserves thanks for trying to give me piano lessons. suburban lexington only had so much to offer, you know. there were no rock and roll (with a speciality in goth) write-by-ear composition teachers. my mum had even gone out of her way to find a teacher who specialized in composition, because i liked writing by ear. but as you can see from the letter, the objective was to *notate*, not just to write. oi.

i never learned to notate. ever. to this day i get someone else to record and notate my sheet music. i’m shit at it. i can read sheet music and notate the way a first grader can write a logical three-page essay on a serious topic. it’s ugly.

the beatles didn’t know how to notate. (or at least one of them didn’t. i forget which beatles couldn’t notate but i think it was paul. or george. or fuck it, maybe it was all of them. i’m not bothering to google. whevs.)

every step on the path brought us to now, and now is where we’re at, and there is and never will be any other now, until the next now, so regret is poison. gratitude only.

which reminds me, i really miss anthony. a lot. it’s the season, i think. but the grief is coming in waves. i miss him. i miss him so, so much. just saying it out loud-ish. it helps.

as for all you aspiring musicians: don’t take any shit from anybody.

THERE ARE NO RULES.

i read this letter out loud to neil, and he cracked the fuck up

when i got to this part: “Evidently Amanda decided on her own….”

and that was when i came up with a brilliant six-word biography of our relationship (have you seen the six-word books? they’re really good: http://www.sixwordmemoirs.com)

his memoir of our marriage is:

“I THOUGHT YOU HAD A PLAN.”

he countered this what he assumed my memoir of OUR marriage would be:

“NO I THOUGHT YOU FUCKING DID”

p.s. i just googled jane winchell. she’s still around! thanks, jane. you taught me well.

i give her credit, i did practice a LITTLE. and i can read notation enough to get by. for that, i think she deserves mad cred. she could have just thrown me out of her house.

p.p.s. i don’t remember the fingernails, but come to think of it, that was in the height of my my mall-rat shoplifting phase, when it was all about the nailpolish. all i have to say to that is fuck the eighties, at least that part of the eighties. i’d like to throw all that shoplifted nailpolish into the volcano of kali along with the fluorescent-paint-spattered acid-washed guess jeans, the feathered earcuffs, the turquoise reeboks, the vuarnet and hard rock cafe t-shirts, and whatever other shit was darkening my life at the time.

p.p.p.s. i’m actually thinking of double-backing on my original statement that i wasn’t going to Thing any of these 12 Things, given that alex actually worked his ass off to put all this stuff together (and his time was paid for, and he was flown to new york to clean up the archives, and he’ll continue to work for me for the next few months at the very least to continue sorting through all Ye Olde HardDrives.) i was chewing that over and thinking: it’s an expensive expense, but fuck, that’s what the patreon is for. the weirdness, the time blogging, the shit that labels don’t pay for, etc…..and i though: maybe i should just retroactively Thing the entire 12 Days of AFPness. so i ask. is that ok? sound off in the comments, please. i’d just charge at the end of the month. if you’re fency, sound off as fency.

p.p.p.p.s my mother also just mailed cranberry bread to the west coast. THANKS MOM even better than piano lessons

how to play tchaikovsky in the style of the punk cabaret.

an open letter to sinéad o’connor, re: miley cyrus.