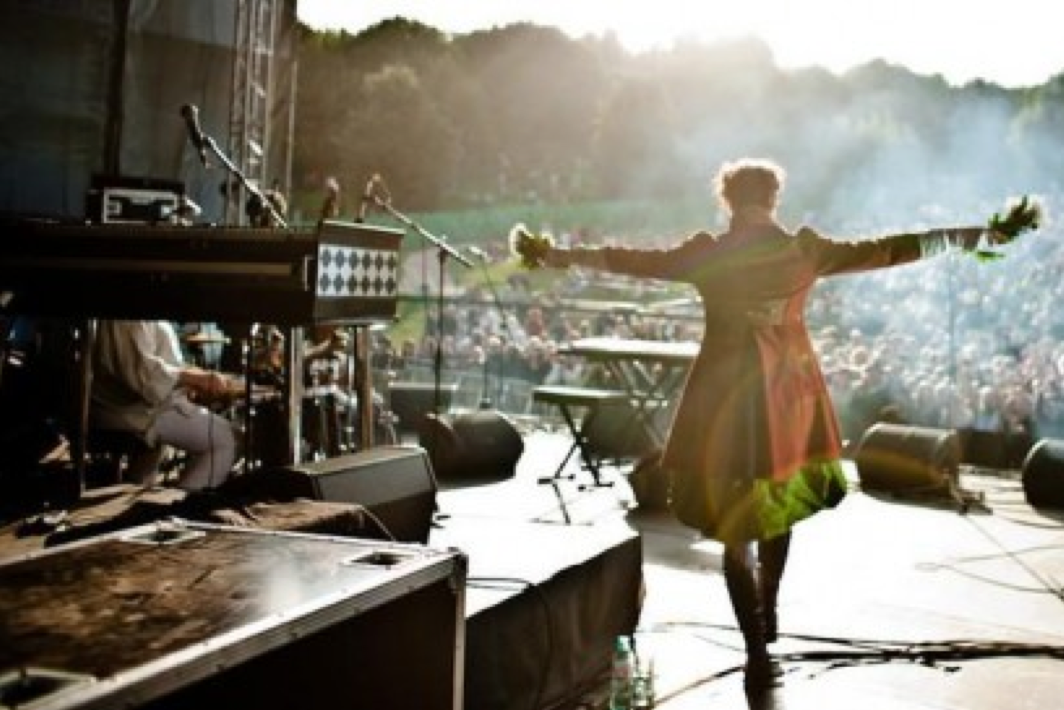 FIRST OF ALL: if you’re in EDINBURGH, for the love of all that’s holy, make sure you’re following me on twitter.

i’m working on a longer deeper russia blog and state of the more mental union but there are SO MANY awesome pictures from the last week that i decided i’d better start getting them out of my life.so here’s set # 1……..very live-picture heavy.
this is, i think, my favorite photo from russia. i look like a CZAR marching out to greet my people. 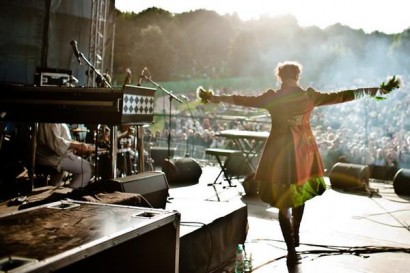 where’s my fucking part in evita? i want my part in evita.
it was taken from backstage by ksusha.
ksusha is great, she wears sunglasses like apples. she’s also building me a russian page on vkontakte.ru (the russian equivalent of facebook). stay tuned. together, comrades, we take over hole of internet.

this is me getting meta and shooting fans after the show, with photobooth on my mac.
i was not aware that my skirt was tucked into my underwear like that. but it actually looks pretty hot: 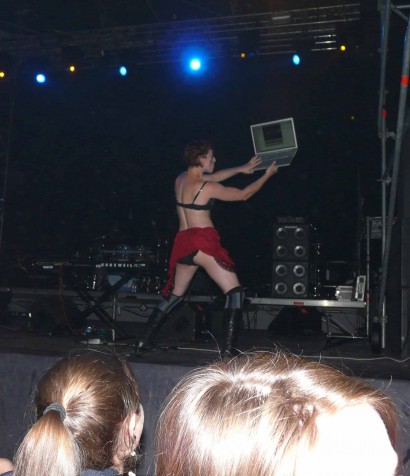 the result from the other side: 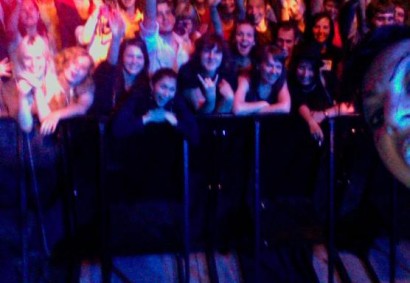 this is me, jason and my stolen russian back-up band.
from right to left, masha on violin, BIG (aka vladimir) on drums, jason, moi, roman on bass.
they were fucking wonderful. 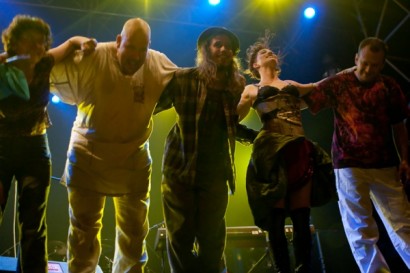 what? i cannot hear you over the roar of the deep borscht. 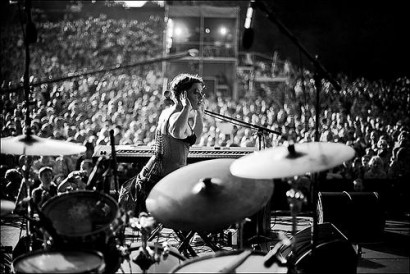 one thing that is readily different in russia is how the fans treated me…..i think it’s because most of them don’t read my blog, because they aren’t so hip to Teh Englesh.
because they don’t read my blog, they assume that i am like a celebrity-type celebrity. and so when they swarm me, they don’t make eye contact and they don’t seem to wantmuch personal attention. i tried to make eye contact and connect thrusting hands with faces. people thought i was weird.
i’m not very used to that. WHERE’S THE LOVE? why would you want my name scrawled on your ticket but not want to look at me? seems effed up.

you’ll notice, these aren’t huge crowds of people, it’s the same amount of people i’d sign for at any show. but here, they swarm and retreat and treat me like gaga or something.

(speaking of which, there’s a great argument going on HERE over at theshadowbox.net about whether covering a lady gaga song would make me the antichrist)

it did make the signing go FAST. instead of hearing everybody’s life stories, i was in and out in a number of minutes.
bad call. if i’d known, i would have made sure they set up a table with a line. so’s i could looks at peoples.
i did do that at the festival, and it was much better. you learn. 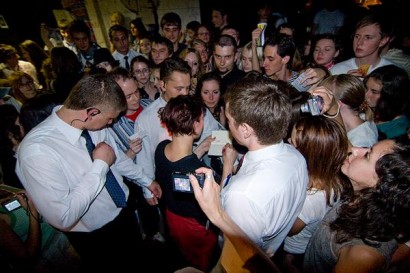 these three uber-serious security guys in the white shirts stood around me with locked arms (they had released their lock by the time this photo was taken when they determined that nobody was going to try to actively….touch me? shoot me? lick me? make love to me, russian style? i dunno) and i couldn’t help but make the comparison of their resemblance to the matisse painting i had seen but a mere 10 hours before at the hermitage. except with not quite as much joy: 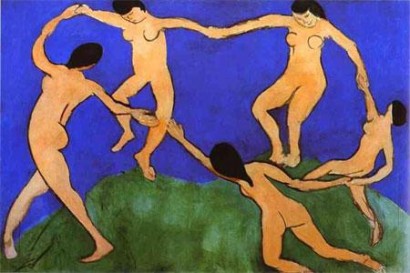 i accidentally sharpied one of their very clean very white very strached shirts with pink sharpie.
i felt bad about it but we didn’t discuss it.
we didn’t discuss much.
bouncers are usually not talkative in general, but these russian ones….i dunno….serious city.

speaking of serious, jason webley and i are not serious.
this is on a bridge they call the “sixteen balls” bridge.
yep, that’s right. a mounted russian man on each corner of the bridge.
four men on four horses equals four sets of (and sixteen total) balls.
the balls were indeed very graphic.
weird. 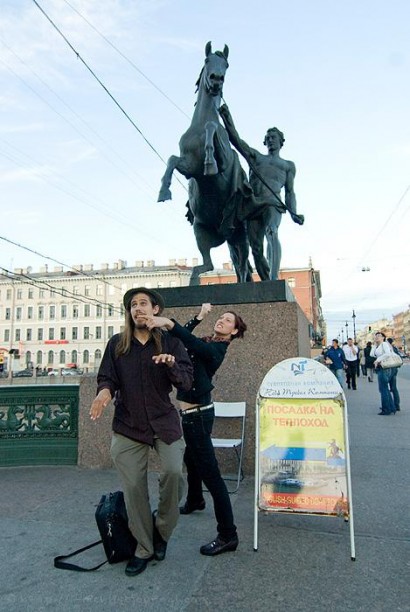 this is me and jason at my secret show at IKRA, playing a cover of “elephant elephant” while big hold the scary stuffed elephant that jason found that day at the “really free market”, a punk rock swap meet where people brought goods to gift away to other people.
i don’t think jason is specifically looking at my tits here, but you can imagine that way if you want to and it’s very funny the way they be all hangin out: 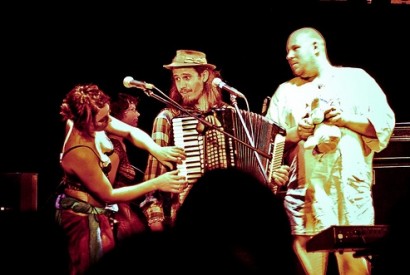 us, in st. pete, feeling the love.
i now own loafers. 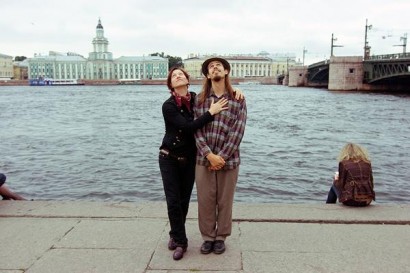 we actually look kind of conjoined here….and i have no idea what we were smiling at. but we look pretty goddam happy, don’t we: 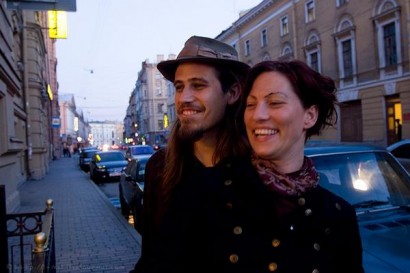 rehearsing for….stuff….in the flat in st. petersburg where we were crashing: 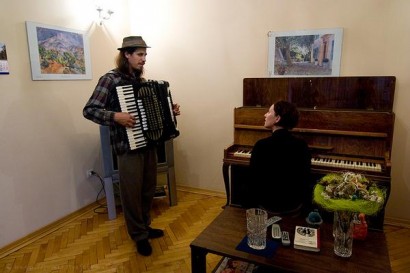 (these above 4 photos by by Софи Му)

this is a fantastic video collage that SPIN took and it’s got great GREAT footage excerpts from the festival show and some really good, deep interview stuff that they took at my hotel room the day before.i also let them come backstage at the festival and film me while i was warming up (i usually don’t do that, but the dude was really nice) and it’s all perfectly edited together.

watch it here, it really is awesome.

while watching, enjoy the bonus footage and clever editing of me crowd surfing to the band Madness right after my set – set to the music “whats’ the use of wondrin”…shown here in still form: 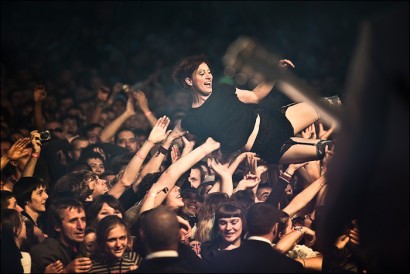 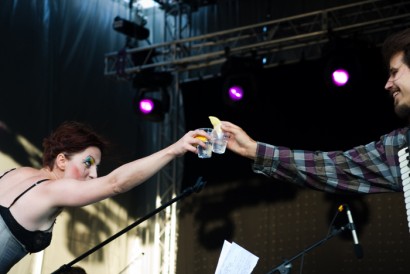 ok. look at the AMOUNT of vodka in the glasses that were brought to us on stage. no wonder i didn’t have a fighting chance that night.

this brings me to my last point, i will elaborate later: i am cutting down on drinking.
the hangover that next day was close to lethal. for real. this shit is ridiculous.