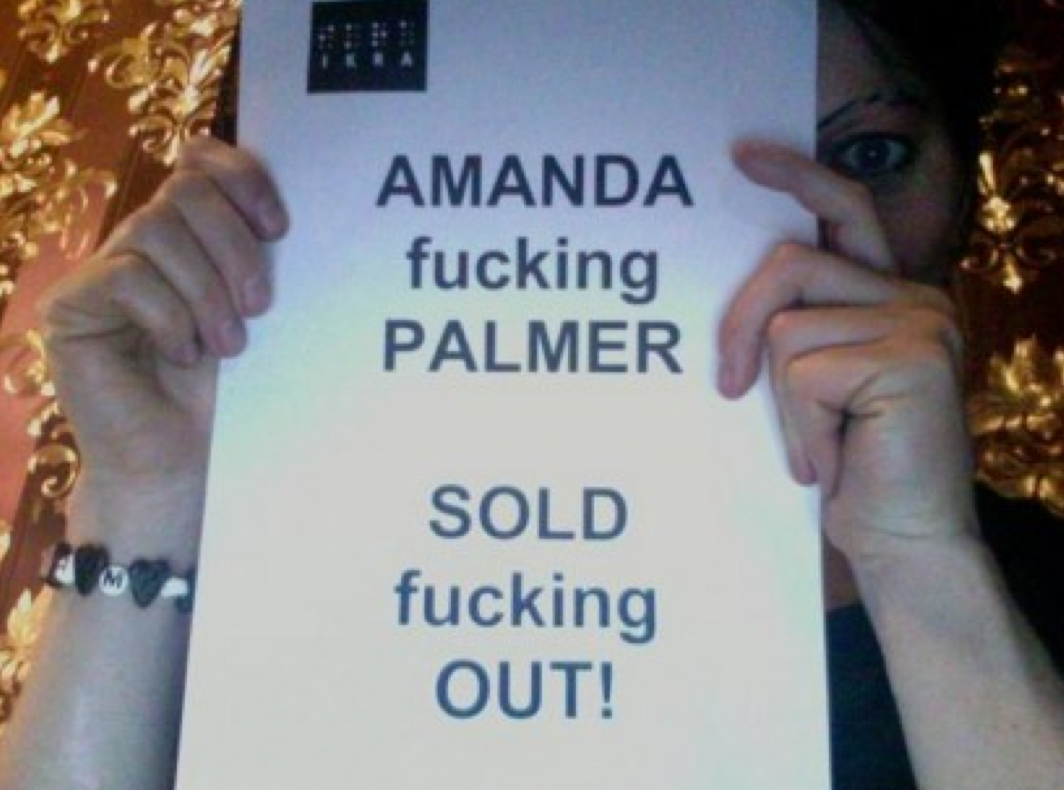 writing from the fringe in edinburgh, scotland, but catching up on russia from last week…

many russians wrote after the last blog to assure me that all russians are not deadly serious and that, furthermore, the security at the club in st. petersburg had actually given them a SPEECH before i came out to sign along the lines of “do not look at Artist. do not speak to Artist. do not be touch Artist.” and this was the bizarre vibe i was indeed picking up on. thank you for letting me know, my happy new russian friends.

as promised, i’d like to now turn my attention to the parts of the russian trip that i quite enjoyed, rather than the things that Bummed Me Out.

first of all, i got to spend a long long time hanging out with one of my best friends, just being.
i keep taking many things for granted in this blog and i often forget that there are always new people reading, especially when i read comments like this:

“that guy” is jason webley. he deserves his own blog, and i think i’ll give him one at some point soon, especially because it looks like we might be spending a lot of time together in the coming year working on the Evelyn Evelyn projct and I want everyone to be aware of the scope of his amazingness. in the meantime, just know that he is Awesome, an incredible performer and songwriter in his own right and he’s also the reason i went to russia. jason’s been playing there about once a year for the last 8 years and has established a great group of friends in moscow, all of whom i got to inherit (and play music with) the week i was there.

his friend serjosha (who jason often refers to as his Russian Alter Ego) is a promoter of strange and wonderful music and, in moscow, we stayed in serjosha’s dead grandfathers flat, mere blocks from red square.

the apartment was filled with cardboard, in various states of existence. there were many carboard masks on the walls. the table on the kitchen where the soviet-era telephone rested was a very sturdy three-dimensional cardboard letter H. why? i will tell you why. one of serjosha’s passions (and he seems to have many, much like jason, myself, and all the freaks i find myself falling in love with) is a project called cardboardia, in which a group of people get together and construct an entire city and community made of cardboard in a day. then tear it down. jason was involved in a cardboardia a few years ago and made an entire cardboard vegetable garden (and invited people to plant his cardboard seeds in the ground – for a price. they would then get to take away a cardboard turnip or…equivalent).

it is meeting people who do shit like this that makes my life worthwhile. it does.

here’s some photos of a cardboardia that took place at the afisha picnic (i think), the year before i played, lifted from flickr.

that’s serjosha in the red fez and the bathrobe….. 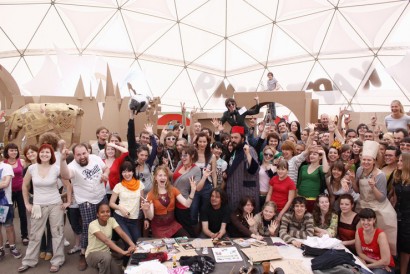 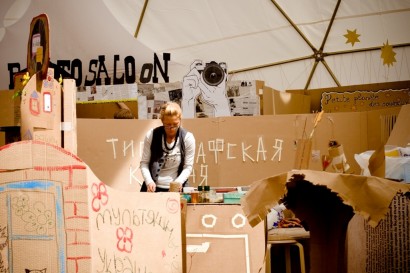 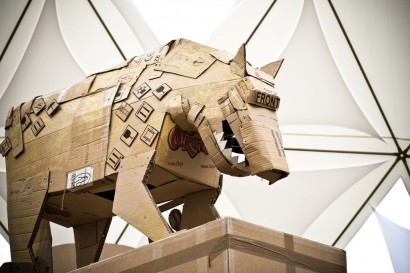 if you’re in russia and want to see what they do: http://community.livejournal.com/cardboardia/profile

jason might have thought it was funny the first time i sang it but i think by day 3 he didn’t think it was as funny anymore.

but we did break into “holiday in cardboardia” a few times when he had his accordion on hand.

every accordionist knows at least a few dead kennedys songs.

here was the flyer the secret moscow club posted outside their door. it made me very happy: 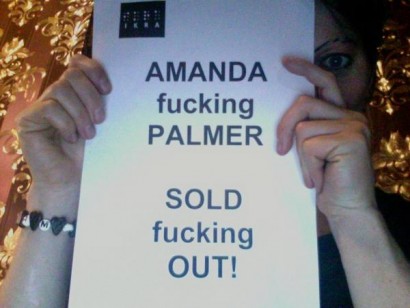 here is the picnic we went on, by the moscva river. 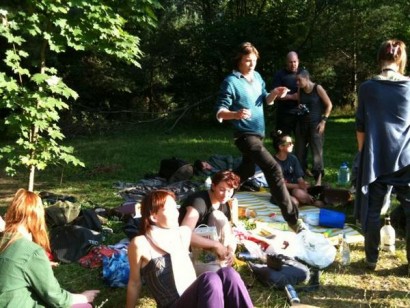 there was watermelon, many desserts, and of course, vodka.
and swimming (it wasn’t too cold) 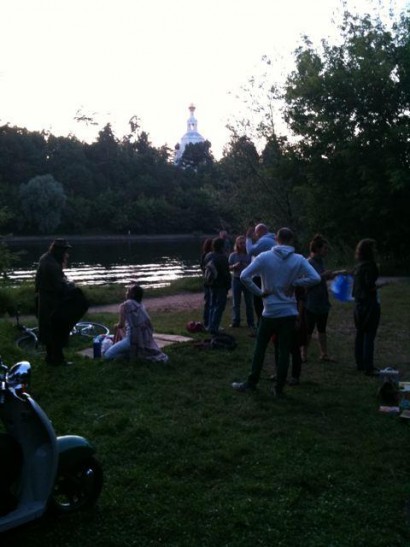 for all of you on twitter who were wondering why i needed to find MARSHMALLOWS at HEATHROW….

jason had promised serjosha a proper american marshmallow roast.
we made an illegal fire and went to town: 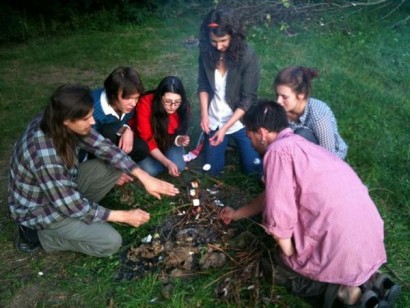 this is big, our drummer, delighted by the discovery of the joys of burned sugar: 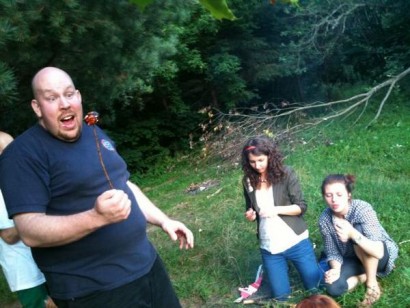 jason & i in front of st. basil’s in red square: 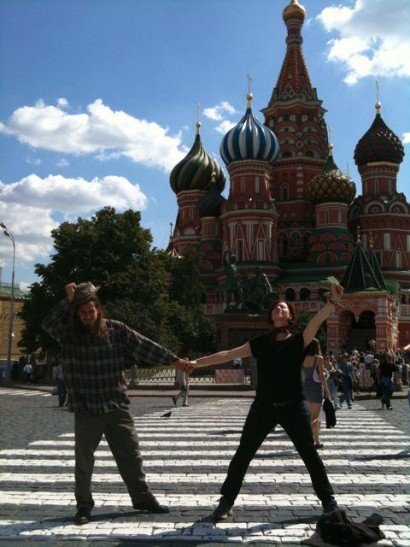 jason and i spent a lot of time just walking and talking and making plans for next year (expect a spring tour involving the evelyn twins).
the food in russia was hard on the fish-eating vegetarian, i ate endless bowls of borscht and fish stew and lots of bread.
we went to a fantastic fancy restaurant in moscow called pushkin (recommended by someone on twitter) and we hit an friendship needs time.

it’s funny to me how traval has changed, and i how i now look at the places i am as a backdrop to things that are more important.
i used to feel guiltier.
i try to prioritize.

but the truth was, when i was in russia, it was often more important to be to catch up on work and spend time with jason than to see anything russian.
this caused a great deal of anxiety and constant second-guessing. it’s the second-guessing that kills me and wears me out.
at any given moment (even now – should i be exercising? catching up on mail? downstairs being social with max, who’s just arrived? practicing piano for my fucking show?)
i’m constantly continuing to measure how i’m spending each moment and wasting a shitload of energy on worrying whether i’m making the right choices.

this is the curse side of the blessed life of little scheduling. there are plenty of things i think i have to do. but there’s nobody around to schedule that list of Shit To Do but me.
so in russia, i didn’t feel much like being in russia. i mostly just wanted to be with jason in russia, and i let him set the schedule and lead the two of us around to places that he wanted to see, and i spent most days saying happily “whatever you want. whatever you want. i’m easy.” as long as i put enough time aside to deal with email and work emergencies, that worked out and i just became a sponge, taking it all in.

the language barrier is difficult as well – i needed an interpreter for most things and was therefore steeped in a constant sense of gratitude that people were installed into our lives for that prupose.
shown below on the far right is Ksusha, who was our friend-at-hand for most of moscow and is also now helping me build of the russian online comminuty.

this is serjosha’s wife victoria, me, jason, serjosha and ksusha in the dead grandfather apartment, holiday in cardboardia central. 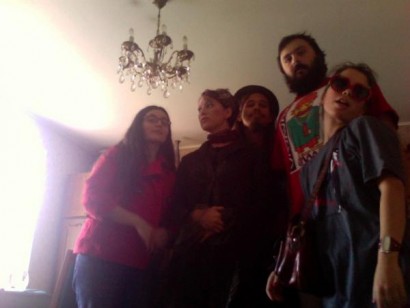 i’d like to point out at this time that i would rather sleep in piles of painted cardboard on an air mattress in a place that feels Real than in a hotel.
i like it when life feels life-like.
which reminds me of an ani difranco lyrics from”dilate” that always hit home:

it’s so simple but so true.

right now i’m staying with the cunninghams, my honorary edinburgh family, and i can think of no place i would rather be.
in a home home. with a kitchen, a chris and mary and rosie and an occasional sam, a bathtub filled with Things, a toaster,
a music and a love and a no expectations and a no real strangers feeling, just home.

ah fringe. shit’s been CRAZY here, i’ve already seen and DONE tons of shows, the twitter experiment proved to be very successful…
(next one’s up thursday night, but i ain’t saying WHERE. follow me betches.)

max has joined me and tonight we’re headed to steven severin’s house for dinner (the bassist and many of the brains behind siousxie and the banshees).

and late tonight, neil comes. i haven’t seen him for three weeks. i’ll be so happy to have him back.

meanwhile, from the feed:

.stephanie. wrote:
four men on four horses is sixteen balls, isn’t it? what about the horses balls?

omg. how embarrassing. it’s now fixed in the blog for posterity.
don’t get me wrong, i was not trying to emasculate the men or the horses.

NoirMuse wrote:
Amanda, I’m sorry this is a very shallow comment as I haven’t read the whole text yet, because actually I’m in too much a hurry to do this (should be at least) but – where did you get that military-esque jacket you’re wearing in the pictures with Jason?

so much love for the coat!!!
i had this coat made about three years ago by a wonderful seamstress named KAMBRIEL.
http://www.kambriel.com/

she came over to my house one day and i gave her all of the weird bits and pieces that i’d always MEANT to turn into THINGS and let her run away with them.
this coast was made out of two separate curtains that had fabric that i just couldn’t part with.

she’s really amazing and is also about to do custom work for the evelyn twins in preparation for their upcoming spring tour (hip and conjoined dresses are not available at your local H&M).

here’s a snapshot chris took of me yesterday while waiting for the bus here in edinburgh.

i tweeted it and judging from the responses it seems that bus-waiting is a very popular UK past-time. 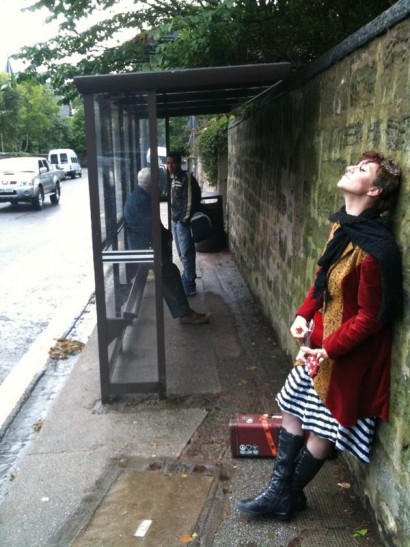 more soon.
lots of fringe madness to catch up on.

MAILER: new show in FL, absolute death, a is for accident, holiday sale, and more…