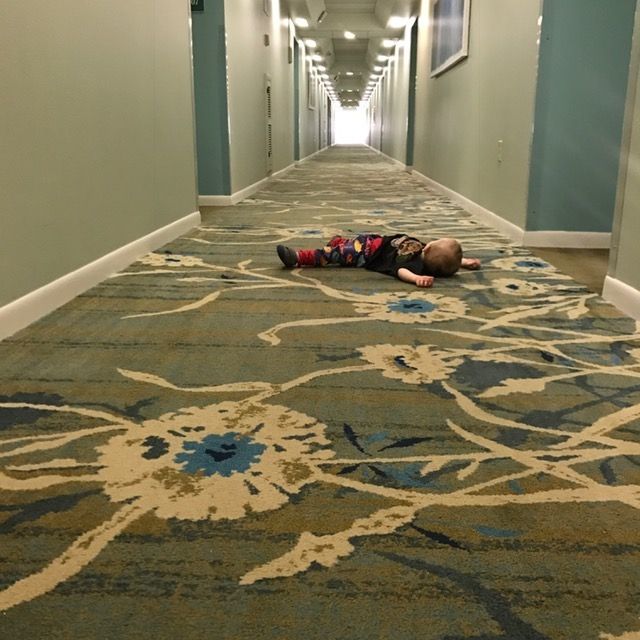 first of alllll….THANK YOU FOR ANSWERING THE SURVEY QUESTIONS. at last count, 785 of you have commented. if you haven’t had a chance to take 5 minutes to answer some really important questions about the patreon process and how you FEEEEEEL, do it: https://www.patreon.com/posts/hello-my-loves-i-7417576

this photo of ash, playing dead, was taken outside the front door of his cousin helen, 98. i thought you’d enjoy it as much as i did. i’ll write in greater detail about our helen visit (yes, that helen, the one who fictionally turned 99 in “a mother’s confession”  if you listened to the song and read the footnotes) when i get to cuba and get a chance to crack my long-form writing muscles. we just came from visiting one of helen’s greatest contributions to planet earth…the holocaust memorial she helped design in miami. i don’t have the words yet, i will form them later.

meanwhile…greetings from key west, florida, where jason and jherek and i are about to throw down in JUDY BLUME’S NEW BOOKSTORE. when i am judy blume’s age, i will probably finally be getting around to opening my fantasy speakeasy cabaret. but when you’re judy blume…you open a bookstore.

i’m actually maybe lying about that. i won’t wait until i’m judy blume’s age. if i don’t open a speakeasy cabaret by the time i’m 50, i’ll be sad. stay tuned. i might even try to open one this summer/fall in new york city. i’m not kidding. i need to do this to feel potent in the era of trump. weimar II is upon us?

eenyway. this whole florida leg of the tour happened because judy wanted to meet the baby. this is how life should be: you arrange shows around requests from author-heroes who want baby cuddles. i think there’s still a handful of tickets left, and the whole show is a benefit for the ACLU, so if you know ANYBODY in the florida keys , TELL THEM, the show is TONIGHT. (or if you’re in florida and feel like roadtripping to key west today…) link: https://www.z2systems.com/np/clients/tskw/eventRegistration.jsp?event=1980&

if you missed the memo, i’m heading to CUBA in a few days.

why did this happen, you ask?

i’ll tell you. so this past spring i went to banff, canada, for something called TEDFsummit, which was basically the TED powers-that-be inviting 1,000 TEDx organizers, speakers, staff and so forth to all hang out and socialize (and see more TED talks, because where there are TED people, there are TED talks). i was alone with ash on the trip,  with my friend fiona helping with ash-duty, and in the middle of being overwhlemed by life, the future, choices, and existence. i hadn’t yet made plans from the winter pre-australia. while the storm swirled, i ran into the author and blogger hugh howey (he wrote “wool” if you’ve read it). hugh is a fucking trip of a human and i’ve known him from various weird encounters for a few years. he LIVES on a boat and just pooters around and writes and blogs every day as he lives the fantasy life of a marine transient. he invited me to come visit/stay on his boat anytime i wanted to. was the baby invited? fuck yes, he said. and, me being in my swirl-world, i asked where he was going this coming year, and when he said “cuba in december”, i just said “YES”. and then i ran into andres levin, another total TED-related nutball (he runs TEDxHabana), who said he’d be able to get me a show, and it was a done deal. the show is FREE to the public and we have no idea if 30 or 3,000 people are going to come. there’s almost no internet in cuba, and as far as i know, i have no fans in cuba. but how would i know? i only know if i have fans somewhere if they tell me on the internet.

so here’s a favor: if you know anybody in cuba…tell them about the show.

this all happened, by the by before fidel castro died. we’ll be arriving in the window right after the country has been in a mandated period of mourning.

in all seriousness…i believe nothing doesn’t ever not happen for no reason (how do you like that quadruple-negative).

since i always want my friends around me, i asked jason webley and jherek and mayumi if they wanted to join in the fun (how often do you get to play a random show in cuba?) and they said yes. but once we got jherek involved, we had to hunt for strings. and i asked andres if he had any connections to strings, and he introduced us to the UN-FUCKING-BELIEVEABLE *ALL FEMALE* CUBAN STRING ENSEMBLE “CAMERATA ROMEU”. just watch them: https://www.youtube.com/watch?v=wvR3yvDC3ZE

and so, there it is. show in cuba.

and since i have this patreon to fund things…i am going to try to get a film crew together in cuba to do….some things. maybe some documentary stuff, maybe a surpise music video (fingers crossed), we’ll see what materializes when i get down there.

on that note: do any of y’all have any:

-recommendations for specific places to go in havana (besides the classic tourist attractions?)

-questions about cuba/havana/the political situation that you WANT US TO ADDRESS if i film a documentary and am talking to a bunch of cubans? ASK.

….i’m connecting with a handful of people in the LGBTQ scene down there…it should all be really fascinating.

and a heads-up:  i won’t be able to post very much (if it all) from about december 15th-new years (i’ll be on my way to woodford festival in australia around december 26th-28th …wish me luck on the fucking 30+ hour plane journey with a baby).

last may I wrote a sermon for the School of Life at an event in london covering the topics of making art, motherhood and, y’know, life itself. the series has little outposts all over the world, including melbourne….so…..i invited a partner in crime to join me for another round: the incredibly talented miss missy higgins.

and since this is going to be a once-in-a-lifetime gig, i may also try to do some-patreon-THING with it…maybe create a little missy&me film for you. i love her attitude towards life, and since we’ll be hitting some heavy topics and getting deep into our experiences of being an artist, being a parent and all that comes with it…the happy, the sad, the complicated….i figure we should capture it. maybe podcast instead of video? not sure. hit me with thoughts. i keep trying to remind myself that not everything needs to be video and visual, especially if it’s mostly about the CONVERSATION. we are talking heads.

ANYWAY if you’re IN MELBOURNE, the tickets will FLY….HERE:
http://www.theschooloflife.com/melbourne/shop/classroom/special-event/amanda-palmer-missy-higgins-on-motherhood.html

it’s Saturday, March 11 at Tanks Arts Centre. tickets go on sale 9am local time, wednesday, december 14th. here’s the link. there’s no pre-sale for patrons, but then i figure i probably have about 3 patrons in cairns, if that….

THAT’S ALL MY LOVES.