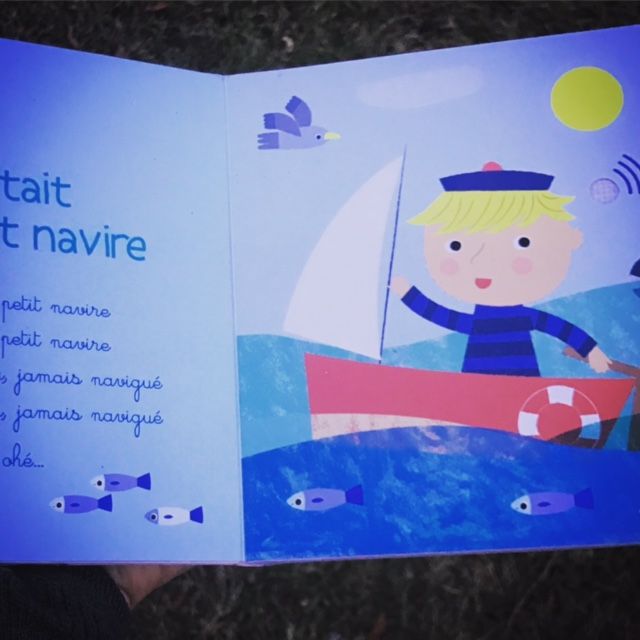 thank you so much for your comments on my slightly dispairing thanksgiving day blog. …i love you. damn we’re a nice family.

there is a little book of french songs that The Boy opens with his tiny hands, and there are little spots in the book that he presses, and the book sings to him. it’s pretty magical: singing french book! one of the songs is called “il etait une petit navire” (pictured here) – “there was a little boat” in english. this  is what it sounds like. it’s very lovely.

anyway, the book only has the first verse:

there was a little boat.

there was a little boat.

that had never sailed…

there was a little sailor

there was a little sailor

who had never sailed….

neil, interestingly, had had this same misunderstanding of the song since he was a child and had heard it from a french nanny he’d had.

our french is pretty terrible,  collectively. i mastered it in school and was relatviely fluent by the time i was 17, but then i learned german in one intensive year and the french retreated into the woods of my back-brain. neil’s french was always sketchy. british school french. but we are trying to be good parents and bring up The Boy bilingual so that he has a plastic philosophical world-view (studies show).

anyway, back to the song.

there i was, thinking that it was a cheerful little song about a little sailor who had never sailed. what a charming poetic vision of the paradoxes of life, n’est pas?

until the moment when i was sitting with The Boy, and together we were playing with the magical singing book and singing the sailor-who-never-sailed-song, and neil walked throught the room and as we got to the end of the song neil chimed in “AND THEN THEY ATE HIM”.

this was a very fucking neil gaiman thing to do.

this is the same man, who, during a nice, leisurely, pastoral walk through the woods with four friends, the day after thanksgiving, suggested that we not touch a large, mangled tree stump .

i’m relly never very sure with him. he knows these woods, and there could be any varieties of realities going on. for instance: he had taken this walk four days before and someone’s shirt had gotten snagged on the stump. this would be cause enough for neil to suggest that the tree-stump had eaten several people. it would be grounded in fact, but exaggerated x100 for humorous neil gaiman effect. or he could just be saying it. his head manufactures the dark without warning. it’s hard to tell.

this is also the same man who’s gotten into a full on battle with me, his mostly-vegetarian wife, when we spend time with The Boy doing “this little piggy” in bed.

i have altered it for the vegetarians.

this little piggy went to market.

neil doesn’t like it. he looks at me as if i have destroyed childhood itself.

so we fight, but in poem form.

i grab the other toe. i counter:

i glare and counter:

“this little piggy ate all the mean meat-eating people.”

our poor child. he’s out of toes.

you can totally imagine him, looking from one passive-aggressive parent to another, his entire internal life falling apart at the seams. WHO ARE THESE TWO CRAZY PEOPLE.

so neil came through the room and said “AND THEN THEY ATE HIM” and i, understandably, thought he was just being neil. because in neil gaiman world, every innocent children’s song sung in a pastoral glade winds up with blood and brains everywhere.

one thing led to another,  we were on a drive yesterday, and i mentioned to neil that we’d been wrong about the boat and sailor, and neil told me that as far as his memory served him from french-nanny days the sailor GOT EATEN and i was like THAT’S IMPOSSIBLE ITS A CHILDREN’S SONG.

it turns out that the original song, a festival of the macabre, had been watered down into a children’s song over the years and ACTUALLY WAS ABOUT A CANNIBALISTIC SHIP CREW  who decided to eat a little innocent sailor boy. (the virgin mary intervenes and saves him in the end, but whatEver.)

it just goes to show.

maybe the trees really are man-eating.

if they are, is it okay that i would rather stay in blissful ignorance?

another metaphor for our times, my friends.

in other news + Thing news….

i played the piano the other night on the internet.

it always starts slowly, the road back to writing. just a few chords.

it was nice to just light some candles and play what came to mind.

i streamed two similar improvisations, one to periscope and one to facebook. i think the periscope one is better. but listen to all if you wanna.

MORE NEW MUSICS…..you have a delicious edward ka-spel and amanda treat coming tomorrow, a preview of our spring album, as promised. we won’t put it on the internet, it’ll be a patron-only download and we’ll keep it from the public til spring. but we can spend the dough on costs and give some to edward and patrick the violinist, etc etc, and it will all be a very good thing.

i’m working on two secret little leonard cohen songs (recorded the day of the Great Colorado Truck Crash of 2016), neil does the voclas for one of them, jherek bischoff did strings for BOTH of them, and we are currently working with charities to use the media content to get people to get out there and donate to/ volunteer for the difficul season to come. there’s so much work to do now that the reality of trump is settling in (if we don’t get a recount miracle) and i feel like it’s our job to roll up sleeves and get money and attention to the people who will need it most: the ACLU, planned parenthood, people who are going to have to fight for freedom of the press, and on and on.

as a patron, you’re going to be funding the art that’s going to burn a light to guide that journey, and i think that’s goddamn incredible. i think there’s no better expenditure of energy and use of art right now. so hold on tight.

also a reminder that there is new merch that needs to be ordered by december 1 to make it to you by christmas. the silly holiday cards for the UNHCR that neil and i are signing are almost gone, go get. http://shop.amandapalmer.net/collections/featured

2. see All the Things i’ve made so far on patreon:http://amandapalmer.net/patreon-things/

neil gaiman in the hizzle