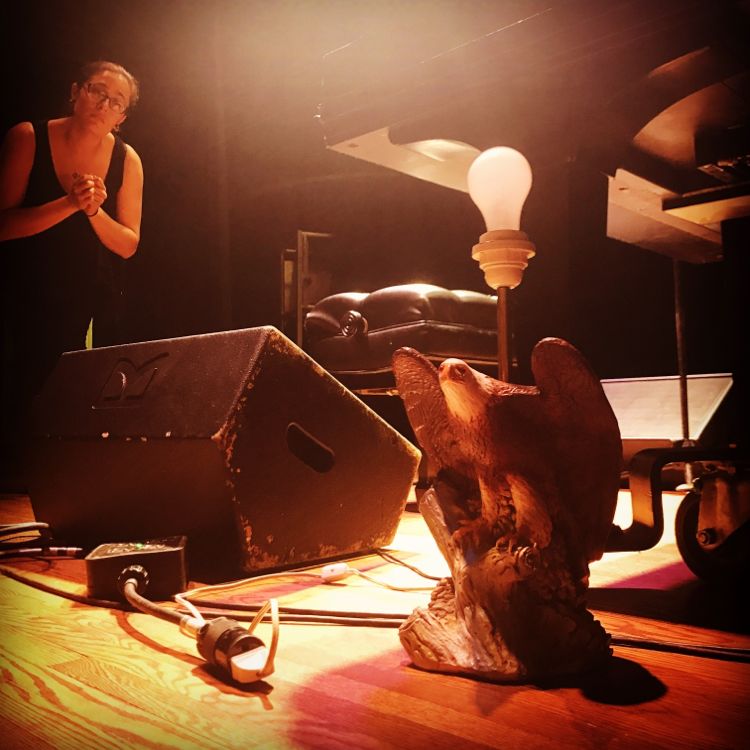 hallo loves. i’m writing to you from a guest bed in my aunts house in louisville, colorado. we landed here today and i took a three hour nap.

its been a crazy tour. last night in minneapolis we found a goddamn bald eagle lamp backstage and crowdsourced a lampshade from a gal named heidi who saw my plea on facebook an hour before the show. the eagle lamp became our stage mascot.

i was proud of neil last night. he usually doesn’t tour with me and he agreed to couchsurf / sty with fans. granted – the couchsurfing offer was from a guy five blocks from the venue who lives in the caretaker’s quarters of an urban castle. how could we not? thanks shane & allison, if you’re reading this, for letting us crash in your pad. neil now has greater trust in the couchsurfing system

and tomorrow, i’ve decided in going to hit a recording studio in boulder…last minute. with whitney. (pictured looking at eagle). she’s been on tour to help with ash and as many of you know, she was my doula and is his godmother. and she’s got a set of pipes on her like nobody’s business.

the last show is tomorrow night and i will never forget the week that i hit the road all cavalier, ready to play a few songs from Piano is Evil and chat cheerfully about my patreon… and then donald trump. and then one night later, leonard cohen.

these shows have been a mess. they’ve been long, and weird, and stupid, and unplanned, and that’s what i needed, i guess. my plan to spend a lot of time on stage explaining my patreon to the crowds morphed quickly into “what the fuck?” musings and handing the mic over to last-minute volunteers from planned parenthood and the local ACLU to talk about what the hell is happening.

life always like this, though, in realtime. i wound up doing a ton of covers. i added “paperback writer” with whitney in liverpool and i liked the arrangement so much i kept it in the set.

and then cohen…i’ve been playing “everybody knows” and “one of us cannot be wrong” at the last few shows. neil has been reading “democracy”. i’ve been reading ani difranco’s “My IQ”. whitney and i have been doing regina spektor’s “uh-mercia” along with crowd-Uh-ing…just to let the steam off. as i’ve been saying from stage, everything’s coincidence, but that doesn’t ever stop everything from being connected, either.

i’d originally booked the studio time just to get a recording of “paperback writer” (i was thinking it might make a great thing’ed animation someday)….which seems downright naive and quaint at this point.

with your blessing, i may just record all these pieces (neil may be able to record in a satellite studio) and Thing them somehow. i’d really like these recordings out in the world, especially “democracy”…the time is now.

why the fuck not? ill try to periscope from the studio tomorrow. keep an eye out. and i’ve been periscoping every gig(here’s last night from minneapolis: https://www.periscope.tv/w/avv8uDMyOTU0fDFaa0t6bmtETlZaS3ZZCvcbBpn0VXrymAZiRkGy_IPq-XstIZeVRTXySvJQrg==- i’ve just been handing people my phone. tune in tomorrow to my twitter feed around 8 pm boulder time.

i love you guys. you keep me going.

im freewheeling as usual, but please do give me any ideas/requests/feedback on the studio day tomorrow.

i have four hours total, and whitney is going to join for an hour while aunt sonia watches the baby (neils back in new york).

it was actually a comment on the last post where someone suggested i Thing “everybody knows” that made me realize i might has well use the studio to my advantage.

oh and i wrote to jherek. if he’s free this week and wants to add strings … strings.

why not all the way. why not fucking everything.

i’m sad. doing things like this makes me less sad.

oh and before i forget – if you want to do something concrete to help the universe, PWR BTTM, the wonderful queer as fuck punk rock duo from NY who opened for the dolls this summer, just had allllll their gear and van stolen while on tour in SF, the day after election day..aghhhhh. they’ve put up a crowdfunding plea and have almost hit their goal. go do something concrete if you want to make a little dent in the universe and help this poor band out. they’re such good kids: https://www.youcaring.com/pwrbttmlisaprank-693732

see a lot of you tomorrow in boulder. thank you for being my patrons. thank you for holding me while we all go through this weirdness. love and art prevails. for now.

1. if you’re a patron and reading this in EMAIL, click through to see/post comments! i’m always reading. and please press the heart button to indicate you’ve read a post.