last night i took a train, without knowing perfectly exactly why, to new haven.
it must have had something to do with my relationship. i’m just doing things.
this has never not worked out in the past, and so i’m just doing it the way i know how:
close eyes. aim. fire. …hope you hit something good.

i spent the night, and then early this morning i got on the train to come back to boston,
to meet up with everybody in the danger ensemble…to go out to my folk’s house for thanksgiving.

i have to preface this with a story that i would never otherwise tell, but i will for the fact that it all fits in together.

last night lee drove me to the train. i hadn’t planned to go.
i was in a state.„,but calm…..decided…..decided to be blank, open, closed.
open. but weeping. not out of unhappiness. just overwhelmed. i am. i was. i have no idea what the fuck i’m doing. i really don’t.
i went straight to the platform and waited for the train, which was due presently.

the day before thanksgiving, there’s always that strange vibe in the air.
everyone is getting antsy. everyone is a little more alive. shuffle-y.
the platform was crowded with people.

i played that game with myself (like you do) where i stared at the train tracks and wondered what it would be like to hop down there the moment the train arrived.
not because i felt particularly suicidal. i never really have. not that.
just because that’s always an interesting exercise. from the very selfish huckleberry finn-ness of wondering what people will think
(and was i complaining about being narcissistic?) but also just weighing how fragile it all is. sometimes i try really hard to imagine. to convince myself for 2 minutes that maybe
ending things is really just that. no big deal. just an ending.

jason webley and i talked about this at length when walking over one of those huge overpasses in seattle.
our bodies could just take that one step. and then be gone.

but we also sometimes misfire. don’t we, sometimes? don’t we sometimes do that random, surprising thing, as humans?
that “hey, why not try this just to see what happens?” moment that we all cherish, that dr. pepper, mountain dew and coke teach us to relish?

but what if that moment comes when you’re walking over a suspension bridge or on a train track with an acela headed for new haven about to pull up?
not so good, eh?

i found myself wondering if it was really healthy to be continuing to indulge these morbid fantasies just because the train was 2 minutes late and i hadn’t bought the new york times.
what would these people think? they’d all be scarred for life. what would my mother think? sometimes my own thoughts are just funny to me. i wonder how many people just jump.

i got on the train.
i had a good night.

so this morning, i was on the 9:30 train back. it was supposed to get into boston at 11:30.
i was going to meet up with everybody in the danger ensemble, to go out to my folk’s house for thanksgiving
at around 11:15, the train stopped and didn’t move for a long time. we were in the woods, more or less.

somebody had jumped in front of it.

i tried not to think too hard about what message the universe might be trying to send me.
we waited and waited, locked in the train. the helicopters came, and the ambulances, and the camera crews.
i had bought a new york times. i read it from cover to cover.
then i picked up the phone and called a bunch of friends to catch up. jason. neil. anthony. brian. my parents, to tell them we’d be late.

at two o’clock i got home and we made our way to my old house.
and here i am, and it’s late at night, and i’m full of wine and brussels sprouts and mashed potatos good music from record player good company smoke and fire on my clothes.
and i am writing this blog from the room that i grew up in, the room i became me in,
which is weird. we’re all spending the night here at my parent’s house.
my collages and my posters are still up on the walls. i’m going to be sad when they sell this place.

i know which side of the train i was on today 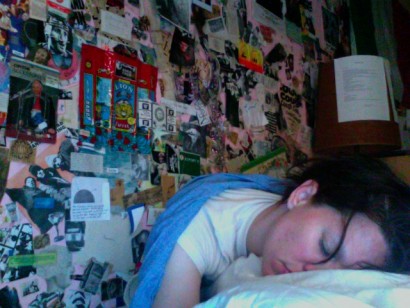