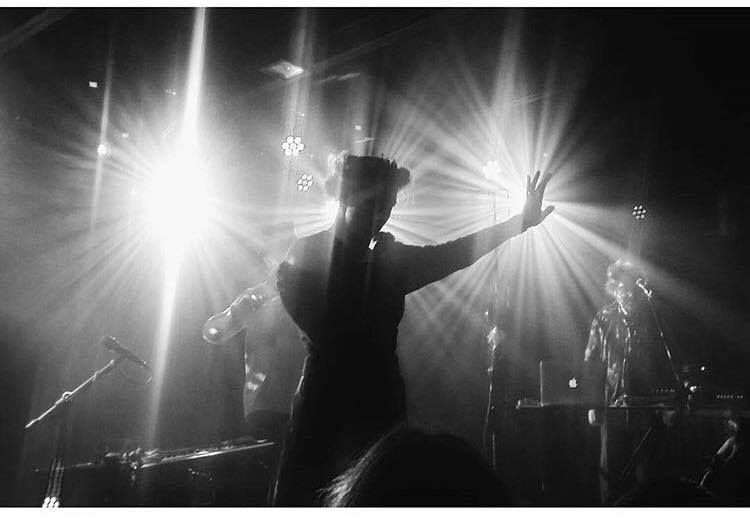 a note from mythis gaiman.

greetings from the dressing room in münchen, germany. we played warsaw, poland last night. the crowd and the band were on fire (we are no longer rehearsing in public! we know ALL THE SONGS BY HEART NOW

and this beautiful photo is from the show (taken by mjmaryy via instagram).

a reminder: we are going to be WEBCASTING THE LONDON SHOW (june 13th, at HEAVEN) at around 8:30ish london time, exact times coming. this show is just getting more beautiful by the night and, since we’re doing such a limited tour, i am so pleased that we are going to be filming what will probably be one of the best shows of the tour. SAVE THE DATE! we are officially “thinging” it so we have a huge budget for sound, lights, and i am bringing a very surprise special guest who will hopefully make you weep with joy. (it’s not neil. i don’t think he counts as a surprise special guest any more, ever.) stay tuned for webcast deets.

there are also still tickets for the london show, the antwerp show, the amsterdam show, the paris show, and the hamburg show!! the paris show is especially grim – no idea why but this time around the parisians are not getting the memo. PARIS, ARE YOU THERE? MAIS OUI? if you are in any of these cities, or know anyone in these joints, we need your word of mouth!! tell people to come to the shows! all ticket info is here: http://amandapalmer.net/shows/

this tour has been so magnificent so far and i keep learning new things. it’s such a QUIET tour…i’m so used to screaming and yelling, and i’m so used to getting offstage covered in grime and sweat. this show is still really emotional (more emotional every night, honestly, especially as the songs are trawling meanings as we go, from the bombing in manchester to the Wolrd News and our little songs colliding in a cosmic blender).

the show at hay festival was phenomenal and weird and i also got to read neil’s “mushroom hunters” poem for him and stephen fry after they talked at length about myth and what myth is, and what myth means, and stephen fry called us “myther and mythis gaiman”, and i didn’t even get grumpy.

the hay festival is such an intellectual book-eating lot that they just sat in complete silence while we performed and it was a nice contrast to the usual club shows where there’s always a slight clang from the barbacks. everyone just listening to the words. i love the words of this record so much. the more i sing them, the more i love them and the more i figure out what they mean.

if you’re new here (and i know some of you are, WELCOME!) you can get the record here, for free: http://amandapalmer.net/icanspinarainbow, and read the whole story behind it. it’s taking on a new life, i think, on the stage. it’s less flat, more suffused with feelings.

edward is so happy – he keeps saying this is the best tour he’s ever been on and i puff up like a proud peacock. the fans are all extremely attentive and kind and we do signings on the nights we aren’t traveling in the morning…and i get to see so many of you (many now covered head-to-toe in playing cards) and it’s like this infusion of joy, this reminder that i make music, this reminder that i’m part of a big sprawling global family of art. so for a lot of reasons, i am happy right now.

maybe i could use more sleep though. i am jetlagged and have only had 7 hours in the last two nights.

on that note: anthony-and-ash-for-short is dealing on tour incredibly well. if you follow me on facebook, twitter, or instagram, i post occasional shots of him doing adorable shit, but i really do try to limit my baby posts to occasional, because otherwise i would go crazy and always be shoving a camera in his face and i try to leave him alone so he doesn’t get the screen-sickness years before it is inevitably going to eat his soul. (i kid. i think he’s going to be so intelligent that when the time comes he’ll be like: “iPad? no, i’d rather have a nice backgammon board and a rare cactus for my birthday.”)

today he spilled an entire apple juice on me and my pants and coat. i will smell wonderful for the next five days of tour.

if you want something chatty and new for your ear-holes….edward and patrick and i chatted with jon on the brainwashed.com podcast. we’re on episode 352, you can listen to it wherever you get your podcasts: iTunes, Google Play, and streaming on the web here on mixcloud.

we were quite giddy with excitement when we recording this – it was like the third day of rehearsal in upstate new york, and we’ve come a long way, but it’s a really funny, long, delve-into-the-record kind of podcast if you’re wondering how we made it, what went into the songs, etc. go go listen.

now a few things for my local liverpudlians and seattle-ites!(i know you’re out there):

first, LIVERPUDLIANS….and people in the UK nearby, this is worth traveling for….a bizarre three-part street party & more (part of this is going to be performed in a CEMETERY speaking of goth goth goth) to celebrate sgt pepper’s anniversary….two of my favorite people on earth meow meow and jherek bischoff – who you know as my long-time arranger and collaborator) are collaborating on a SONG FROM ONE OF MY FAVORITE RECORDS OF ALL TIME – sgt pepper’s by the beatles. it’s the 50th anniversary of the album and the liverpool arts council has commissioned 13 artists to do FAR-OUT work inspired by the songs – jherek and meow got “lovely rita” and they are going to TOWN! street parades! sound-recording-installations of modern-day liverpudlian parking attendants! GRAVES!!!!! i am so so so so sad i’m going to miss this by a matter of days. if i’d known, i would have routed my goddamn tour around it. BUT YOU CAN… AND IT’S FREE!!!!!!!!! go watch my friends make weird and beautiful and heartbreaking art inspired by the parking attendants of liverpool and feminism and all the things that you know meow and jherek will throw at the wall. YAY.

all at once. on an island. dozens of bands, camping, hollering, sharing, freaking, and a total festival silence in effect from 11pm on saturday til dawn on sunday. I WANT TO GO. but i’m on tour in europe goddamit.

so….if you missed the memo last year about my dear friend jason webley’s magical “ONCE” weekend-festival-gathering, now’s the time to get on it – he’s doing it again. it’s coming up next weekend, june 9-11, and i’m really sorry i won’t be there – last year sounds like it was absolutely wonderful … find a tent, grab a friend, just DO IT. i promise you’ll have a pretty wonderful time. this festival is SMALL. it’s $11 to get in. it makes no money. jason is just doing it because jason loves doing it and is jason and like me, gets his rocks off by floating around connecting things and people and hoping everyone will be a little happier because he did it.

i wouldn’t be at all surprised if some of you here on patreon are already going so PLEASE if you want to use this space to carpool/find each other/encourage each other to get off your asses and go…DO IT! jason is so awesome he even has a carpool google doc on his festival website.

that’s all for now. on to soundcheck….see some of you soon