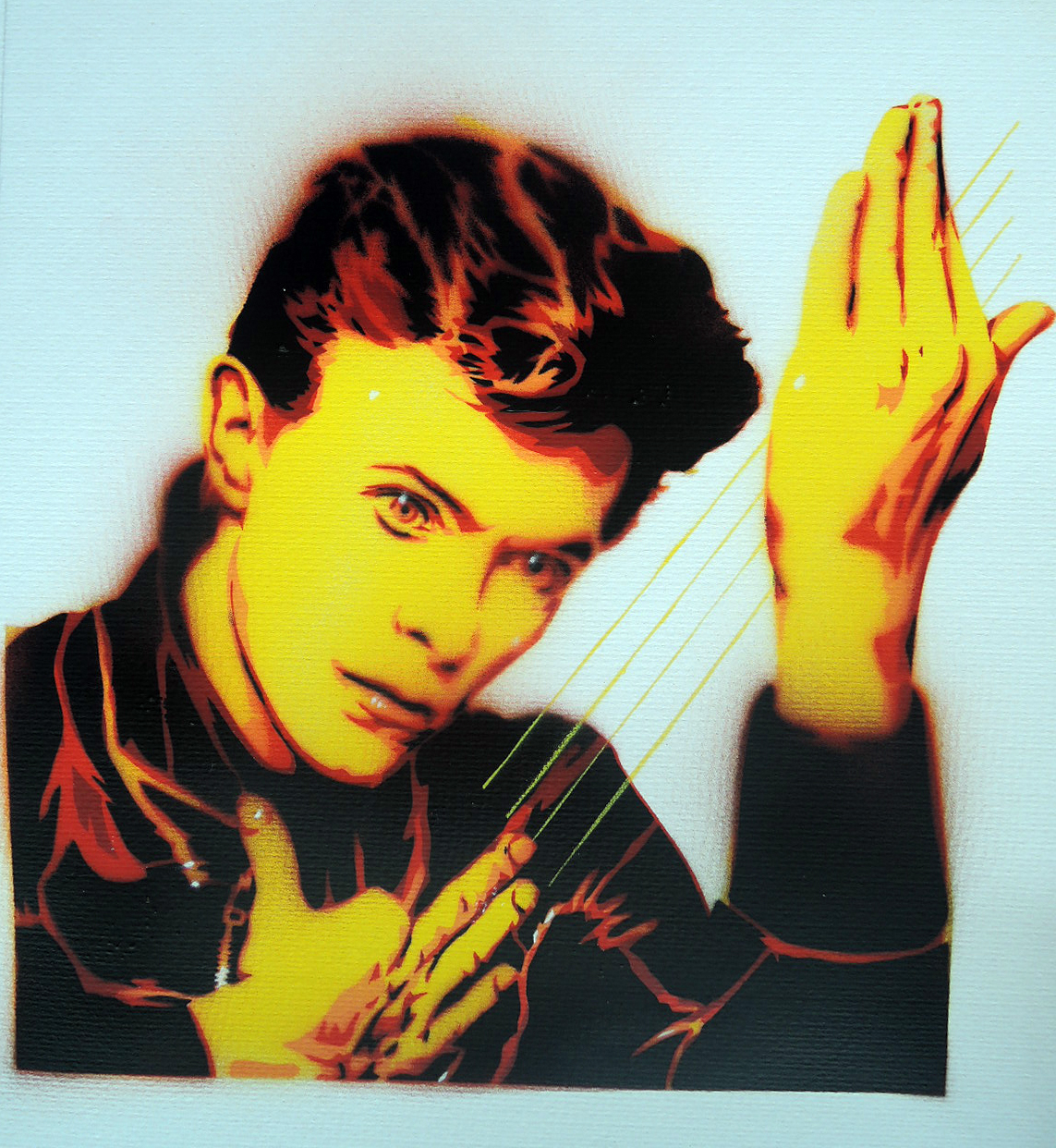 THERE MAY WELL BE A WEBCAST OF THE VOGUE SHOW!!!! news soon.**

first i’ll share the art-words (we only have one more left, from david mack, and it’s comin’)…for now, HA-HA, an artist who came to me through sarah beetson, who did the above artwork for “heroes”….

he’s a street/stencil-artists from melbourne, australia.

I chose the ‘Heroes’ track because it has positive lyrics which inspire the listener to ‘be a hero even if its just for one day…’ . I remember watching a live version of Bowie singing Heroes on youtube & Bowie said ‘I dedicated this song to my son & everyone in the crowd who have kids & to parents of the world’ , I thought those were quite moving words. I was on facebook when I started to see comments & images popping up of Bowie thats when I realized he had passed on, over the followings weeks social media was abuzz with tributes to Bowie, a great way for fans to say thanks for decades of great songs, acting , painting etc . In this piece Bowie is the hero of our times…

…reading that made me think a lot about being a parent.

i’ve been so squeamish about being a parent all my life….not because i don’t love children but because the image of “parenthood” looks so unappealing most of the time. maybe it was growing up in the suburbs without good art-parent role models, or maybe it was just the general cultural diet of brady-bunch commercial breaks on channel 56 depicting boring, boring, boring families that seemed to do nothing but live in a nice house together and occasionally go on trips to waterparks and fast food restaurants (with FANTASTIC whites, doris gets all the stains out!!!)

“now that you’ve had a child, do u think u could of lived happily without having him?” (from @Tar_pits)

“yeah. I do. I was pretty fulfilled. but now it’s different and I’m also fulfilled. x”

he’s only 5 months old…but i feel like i’m cutting through one cliché at a time.

clichés are clichés for a reason…they’re often true.

but with the kid clichés, i’ve been finding some are so, so, so true and some just…aren’t.

so, cliché number one:

once you have a child, you cannot imagine your life without him/her/them.

does not ring true i can imagine my life without him. i lived it for a very long time, and i loved it.

right is still there, it just didn’t happen to happen.

for your further edification on this topic,