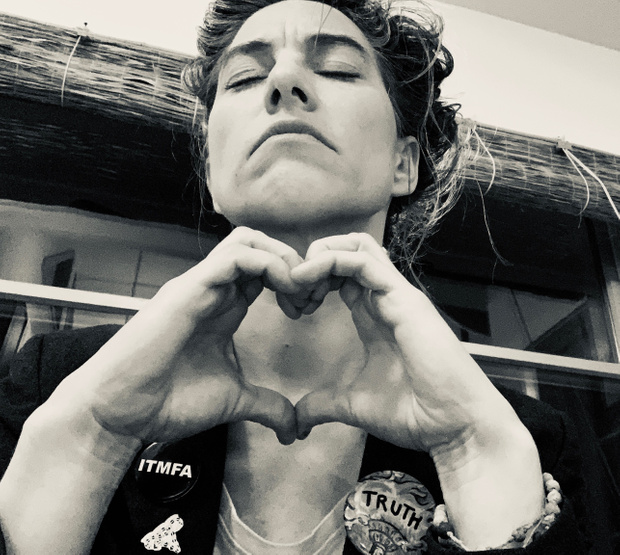 and if you don’t feel like a dose of death, well,….skip this.

the alpha, and the omega.

the omega. the end, the final letter of the greek alphabet.

jesus was supposedly the alpha and the omega.

last week, neil and i got into a forty-five minute argument in the car about how you pronounce “omega”. i say “oh-MAY-gah”. he is british. i didn’t even know this was a thing until last week, but he says “UH-muhh-gah”. it just sounds so weird to me. but fine, the brist have all sorts of different ways of saying things. i maintained, however, that since i was going to a place called “the omega institute”, he should at least attempt to pronounce it “oh-MAY-guh” the way i wouldn’t, as an american, pronounce something the american way if i were in england and it was a Proper Place Name. like, if we were staying in The Tomato Hotel, i’d refer to it as “The Tom-AH-to”, the brit way, because it would just be, like, polite. it’s not called the to-MAY-to hotel. it’s a hotel. we’re staying at the to-MAH-to, darling. please come for cocktails at the to-MAH-to. he disagreed. he was like, you are shitting all over my hardcore identity and don’t tell me what to do. we argued like this in circles for a really long time. it was a long drive back from new york. it went on and on. we could not agree. i insisted we keep it friendly. when it appeared that things were getting out of control, i produced a snack for neil so we could keep arguing for fun without killing each other.

it was a nice drive. we agreed to disagree. 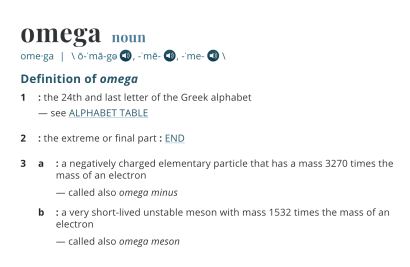 the extreme or final part.

greetings from the omega institute.

i wasn’t going to post tonight. you will see why i needed to.

it’s been a long few days….our house was full of friends family from all corners (on top me me and neil and ash in the house, we my mom, stepdad, step-sister & nephew from santa-fe, my omega co-teachers wayne and leslie, leslie’s niece…you should’ve see the kitchen).

neil and i haven’t had any time alone, really, we havent’ been able to catch our breathe since neil came back from the tsunami of good omens. we’re both treading water and cutting corners in every part of our work life to make space for the summer callings: the family, a walk, bed time with ash…we let things suffers as we have a million times before because if we didn’t, we simply wouldn’t stop working. we know.

yesterday we spent the whole day at a memorial for my cousin michael, about a 90 minute drive up into the mountains from our house. i’ve mentioned donna and michael before, they’re my only family in new york, and i used to visit their hand-hewn home in the deep deep catskills woods when i was a little girl – my only early history with this place i’ve now sort of accidentally moved to. there was old family, friends of friends of family who hadn’t seen me since i was three, lots of beer and bbq, the sort of memorial that’s a proper woods-party and hang. i posted up a little photo gallery here on instagram. it gives you a sense. here are a few of them.

this is donna and michael. getting married. 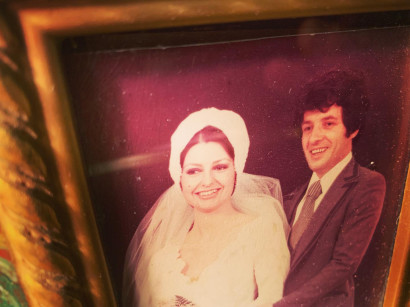 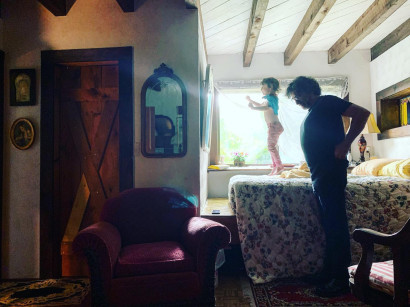 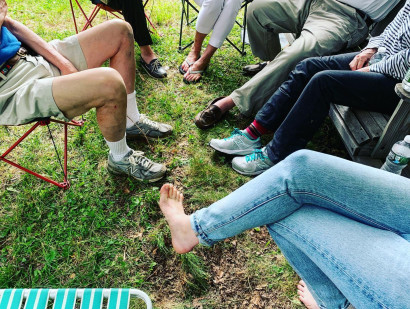 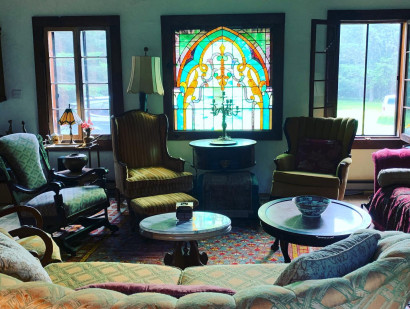 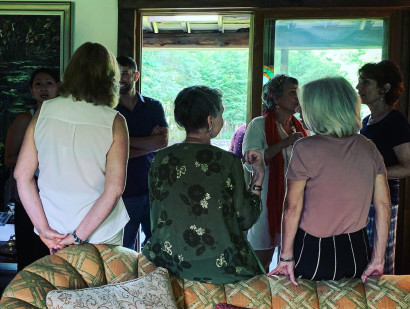 that’s donna’s back, in the green.

michael built that house with his own hands, with the help of some friends. some of whom were there. whole stories, whole lives i didn’t know. whole ends and beginnings. billions of them that we never know.

they were eating breakfast, and michael just keeled over. then he was gone. they were going to go to work together that day, like they did every day. they did everything together.

i took donna up to the bedroom and played her a song on the ukulele, just for her. she told me about the bed. about how hard it was. i get the point of doing that now – must a song for a person – in a way i never used to. sometimes songs are better just for one. music is a gift. performance is performance. i didn’t used to know the difference between the music and the performance.

on the way home from michael’s memorial, i finally had phone service after a long bout offline michael dunaway, who’s been filming me on tour, sent me the news about riley.

riley was at the nashville show. 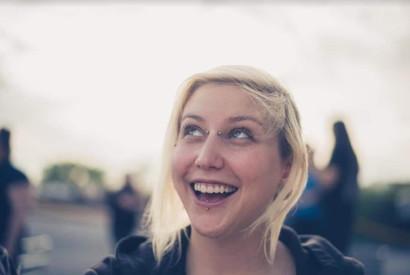 riley was so much younger than michael.

but it’s never a good time, is it.

i remember riley at the nashville in-store during the Q&A, being so open and light and bright and alive. inviting everyone and anyone to stay at their house for a cuddle party. looking so alive. not like a person who was about to be gone. not looking like a person you needed to be worried about. making people laugh.

jack just sent me this screenshot of them on stage with me. 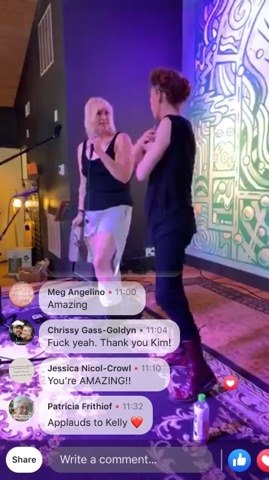 and of this text that riley sent him after they met me at the record shop.

i don’t think riley woulve minded me posting this one either. i signed their boob. it was funny and fun. 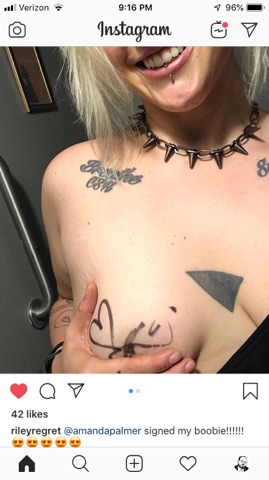 i sat there, in the car, taking this news in while neil drove and ash sat in the back, watching alice in wonderland. i turned around to see what he was watching, exactly. he was watching the moment where the playing cards are painting the white roses red. he was happy and smiling at the playing cards painting the white roses red.

neil was just driving, chatting, in his own world, in our world.

i read him what michael sent me, he had cut and pasted the text that riley had posted to the official patreon FB group a few weeks ago.

cw: suicide, drug use mention
.
.
.
.
I’m coming up on the anniversary of my last suicide attempt. I thought I couldn’t get out of the heroin and depression hole I’d dug for myself and I thought it’d be better if I just let Los Angeles kill me like she’d been trying to do from the start. I tried two days in a row, making the last time my 16th attempt, and dudes, I REALLY, really tried to die. But I didn’t. I fell asleep for 20 minutes and woke up and cursed god and cried and was so angry that I wasn’t allowed to die but my friends were.

I have 92 days sober today (from alcohol/everything else—the last time I did heroin was June 23rd, 2018, but I finally bit the bullet and decided to get sober sober on March 2nd of this year).
I’m on my 7th step in AA/HA.
I’m in the middle of falling in love with someone who’s everything I’ve ever wished for.
I have the best friends I’ve ever had in my entire life.
I finally got to see Amanda play for the first time two weeks ago.
I have a really good job.
I finished the album that would’ve gone unfinished if I had died.
I’m playing my first show in six weeks.
I wrote my first song on a piano a week ago (literally never thought I’d be able to do that).

I have almost everything I’ve ever wanted, and even though I’m struggling with anxiety still, I am so fucking grateful that the ride didn’t end that day, genuinely. The pain I’ve gone through in the past year pales in comparison to the pain I was in from like 2004-June 2018.

If you’re struggling, please don’t give up, even if you keep fucking slipping and falling, because the next try might be the one where you get to start creating your dream life.

it doesn’t have to be a snowman. thoughts of the night – and a chat, if you’re up.

i am not on zoloft.