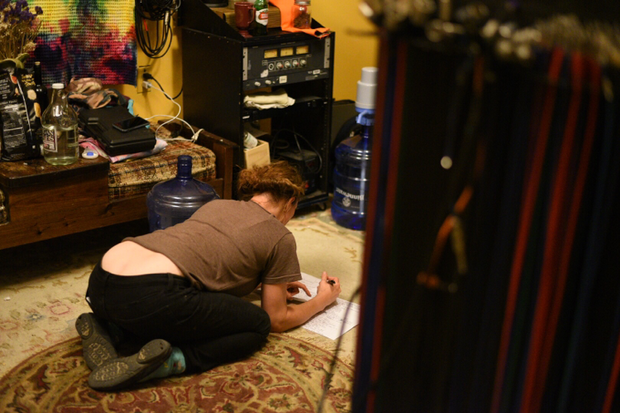 hallo loves
this’ll be brief because i am totally destroyed.
short story:
i finished the song today at around 3 pm. it’s really good. it’s called Drowning In The Sound.

from 4-10pm i brought the engineer into the studio and tracked the entire time. hours of piano tracking and punching, take after take after take…and then another few hours of vocals and vocal overdubs. when we finally hit 10pm, we were nearly finished, like 95% there, i was so overjoyed (mostly so i could go home and sleep, because i’ve got a wicked cough and was holding on by a thread)…hayley and michael (who’d been kicking around d in town) finally came into the control room and we listened the track down and i was really really happy with it. i was just sitting down in the studio to do the last few piano overdubs when the engineer came in with an incredible pale face and told me that this had never happened to him before, but the vast majority of the session had vanished. then i went pale. i was like: that’s not possible. things get saved. pro tools is forever. there are ways. he shook his head. then he said he needed to go outside and maybe throw up.

we tried starting again but i was wrecked and i couldn’t keep pace with where i’d been. i called neil from the parking lot.

i’ve had way worse things happen to me in my life. i didn’t freak out.

i told the engineer…people die. this is nothing.

i’m cancelling the morning and early afternoon tomorrow and i’ll do it all again. it’ll be better. it’ll have to be.

when i came home, neil re-told the story of the time he lost 21 chapters of a book while trying to transfer the files and my friend coco told me that i was her zen guru because i didn’t seem mad at the engineer. in truth, i’m more worried about him than anything else. he didn’t look so hot. i told him to go home and not worry.

at least hayley and michael heard it before it was gone. if i die in my sleep tonight, i hope they spread the lore far and wide forever about how good a song it would have been.

and also: none of this would be happening quite this way without the patreon. so whatever. i’m infinitely grateful. what fucking awesome problems.

and when you hear the song tomorrow (once i re-record it), you can always imagine that somewhere, forever floating in the rings of saturn, was version #1.

for your enjoyment: a picture of my bum, at work on lyrics, by hayley.