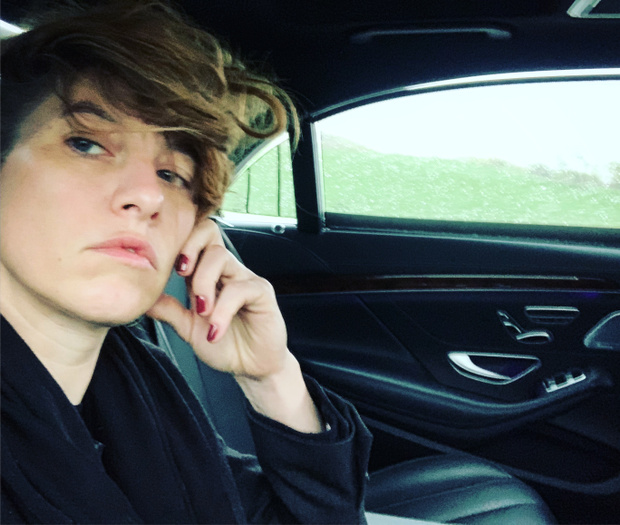 the lion, the witch and the white house.

this was the kind of week where i almost didn’t have time to pee most of the time. so. much. is happening. so much is happening that i recorded this voice ramble for you yesterday, then couldn’t even find the fifteen minutes during the course of the day to write some words and post it up because i was at work on music video stuff from noon til 10 pm and then i was fecking tired.

please listen to the voiceramble if you can….i’ll try to do my best to catch you up here in the post, but the voiceramble is more ME than these words will ever be. i recorded it yesterday behind a coffee shop in woodstock, NY, with basically the only free 15 minutes i had all day.

greetings from a plane. i didn’t get enough sleep last night. i had to wake up around 6 am …no rest for the wicked…. i’m flying to washington DC. i’ll tell you why in a second.

the video shoots (for “drowning in the sound” and “look mummy, no hands”) were both BEYOND AMAZING. here are a couple pictures, i’ll post many many more when i’m not so strapped. the power and beauty of michael pope’s direction was beyond, we are taking things to an extraordinary new level, and it’s all because of you. i’ll have so much to say about these shoots, when the time comes. we also filmed documentaries for both shoots.

krys fox was on the set all three (oops! it was only supposed to be two, i’ll get to that later….)

i don’t wanna give TOO much away but…look. 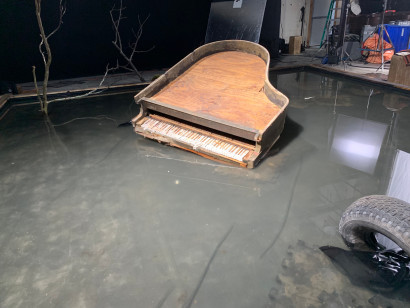 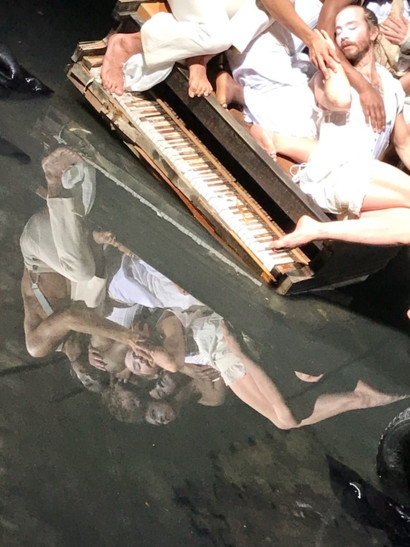 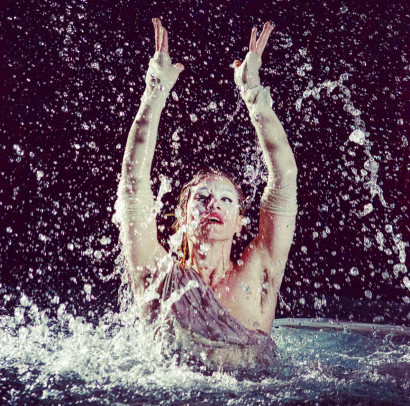 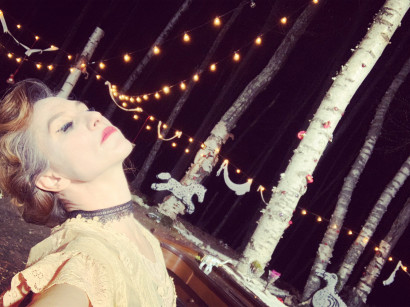 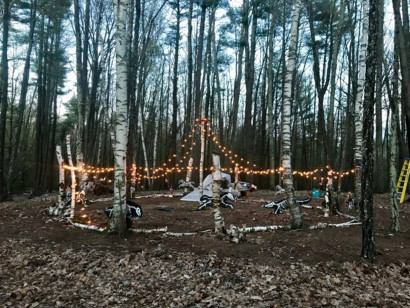 IT ALL LOOKED SO BEAUTIFUL ….. and micahel pope just slaughtered it in the directing dept.

i’m fried and fizzled and yet completely full of energy. in the last seven days, i’ve played two of the biggest shows of my career, shot two of the biggest & most important music videos of my career, and you’d think i’d want the next two days off. i do. i really do. but then  was invited to the white house correspondent’s dinner by the LA times. WHO THE FUCK SAYS NO TO THAT? so i’m going. i’m taking laurie penny (who’s also here on patreon, you should support her) as my +1 date, and i actually have no idea what’s gonna happen. but i know that she and i are gonna figure something out. we always do.

here we are in dublin during the abortion referendum…during the lit festival that brought us together. i tell this sotry on stage, many of you’ve heard it…. 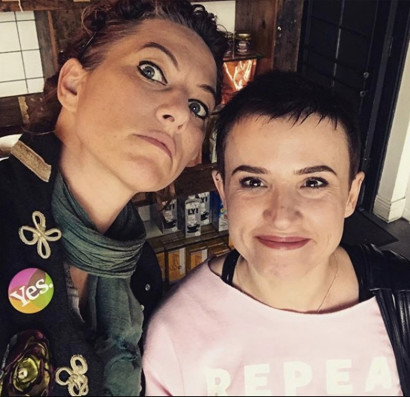 …all i i know is that that i’m justifying the adventure by making a travelogue/diary/podcast out of it, and i’ll be putting it out on the patreon. this is all so rogue – i don’t actually know what i’m doing here, which is why it’s incredible.

the president traditionally attends the WHC dinner, but trump has been snubbing it since he got into office. the tradition is for a comedian to roast the presdient – and if you followed along last year, the comedian michelle wolf KILLED IT. it caused a huge ruckus and now, dismally, the WHC dinner has broken with tradition and has invited a historian instead. whaaa-whaaaa.

in breaking news: The Pussygrabber In Chief is not going to show yet again, and has demanded that white house officials also boycott the dinner. FAKE NEWS!!! 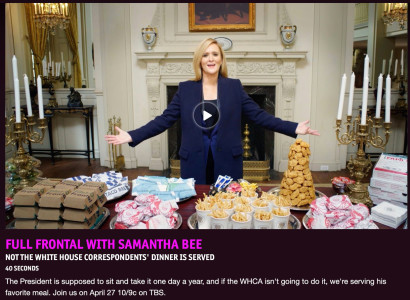 i also scored an invitation (art of asking, eh!!!) TONIGHT to samantha bee’s annual anti-WHC, aka “NOT THE WHITE HOUSE CORRESPONDENTS DINNER” dinner. i’m playing both sides of the fence, y’all. it’s airing live on TV at 10 pm on TBS if you wanna tune it. she will do the trump-roasting that will clearly not happen tomorrow.

WHY AM I DOING THIS?

i don’t totally know. because? because why the fuck not?

because i am an independent entity all around and I CAN???? opportunity has knocked, i have this patreon, and honestly….my birthday is on tuesday and i couldn’t think of anything i wanted so i’m giving this weird-DC-adventure trip to myself, care of neil, who agreed to watch the kid for two days while i hootenany.

i’ll be taking notes and covering all of what goes down for this here blog, and i’ve got an engineer meeting up with me & laurie so we can start digging deep into what this is all about. i’m putting out my iphone left and right and just doing a running commentary of my thought from the time this plane touches down in DC.

you folks know me.

i have no personal job-stake in the white house scene – i’m a musician, an outsider, not a player. this is good. this means that i can go there and have nothing to lose.

whatever happens, and something ALWAYS happens, i’m sure i’ll have things to learn, to say, to share. i love taking you with me.

THAT BEING SAID….is there anything you want to know? ask here. i’ll fold it in.

the “art of asking everything” podcast is coming together so slowly but so beautifully – we have almost six episodes in the works now. I CAN’T WAIT TO MAKE THIS REAL.

music, politics, feelings, blogs, podcasts, ALL IN FUCKING ONE.

ambassador fucking palmer, at your cervix.

here’s some catch up photos from this last weekend of tour, so it’s all in one place.

it was hard, i gotta say. my family in the audience, and anthony’s friends and family…i’m not sure i’ll ever play a show as difficult as that one. but i got through it, and it felt like stitching up wounds with a huge needle and leather string. painful, hard, slow…but i got this shit stitched up in the end. i went home to the cloud club and collapsed and got to get in a good catch-up with lee the next morning. he came to the show, too. everybody came.

here’s all of YOU patrons….DID YOU KNOW THE MASS STATE HOUSE HAS A GOLD PINE CONE ON THE TOP? i didn’t. wikipedia told me….

(all photos below by hayley rosenblum until they’re not….) 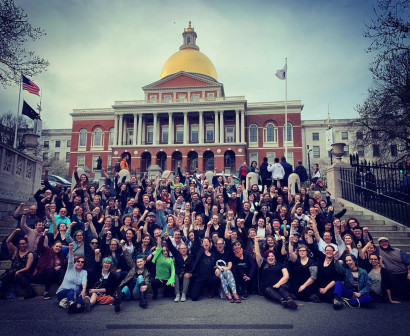 sadly the woman with the “JESUS IS COMING” sign got out of the picture right before we could take it.

here is me. i’m not sure jesus is coming. 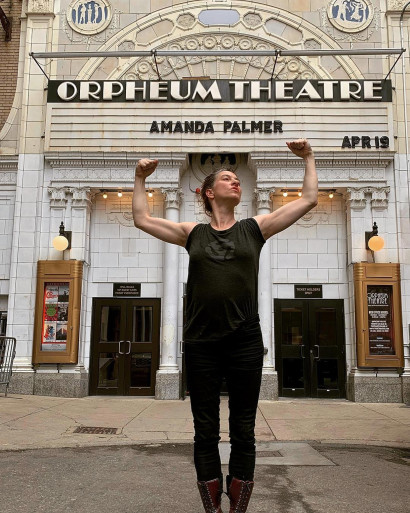 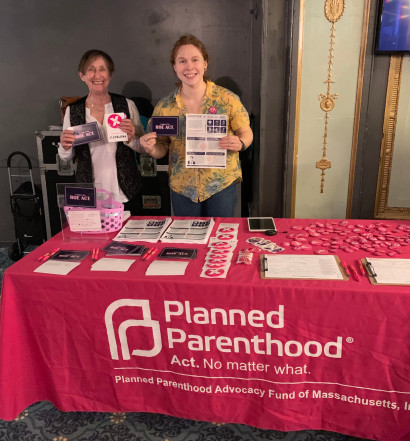 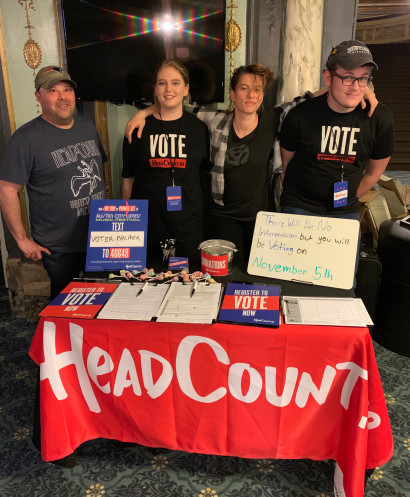 …thank you headcount of new england. getting people registered! 2020 is COMING.

here’s whitney and hayley as the patronators (michael not pictured, but joined the table too)…. 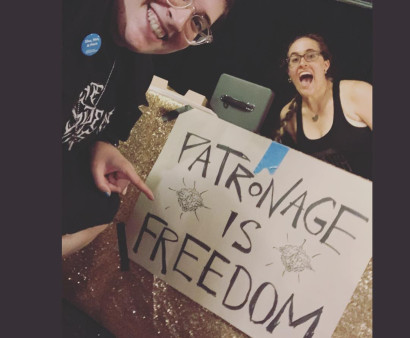 and YIKES, since we ran out of patron pins,,,,,i realized we had an obvious instant solution, and we sold signed copies of the “empathy is nothing” poem, with all profits going to the muslim justice league of boston (we sold them in boston AND nyc and raised $1,447. fuck yeah!). i want to talk more about the MJL in another post and give it all the story and time it deserves….hopefully its own dedicated podcast episode.

ART IN THE MAIL patrons…we are working on making a limited edition print of the poem to send to you IN THE MAIL! hold the phone. 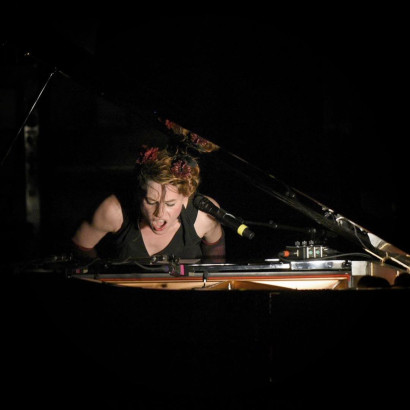 here i am, post-show at the beacon… 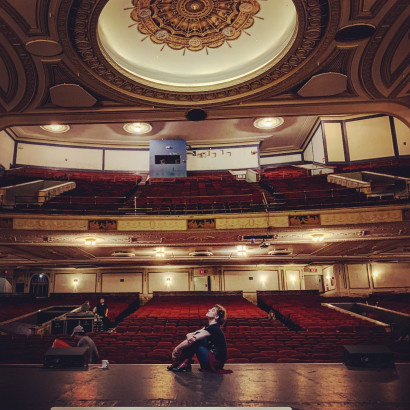 and here’s the pe-show patron photo!!! right in front of the natural history museum.AND I DID INDEED SHOW UP ON A BIKE. it was the fastest way by far. and the fucking bomb to be between soundcheck and show prep and get a little 10 minute bike-ride-through a new-york-spring-day ….. 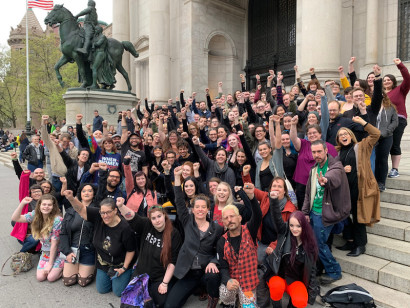 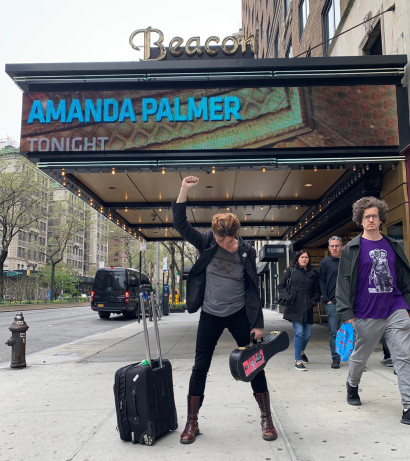 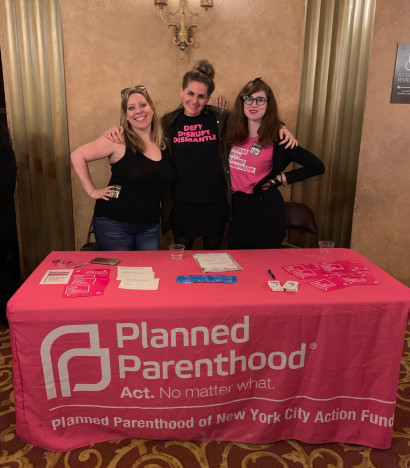 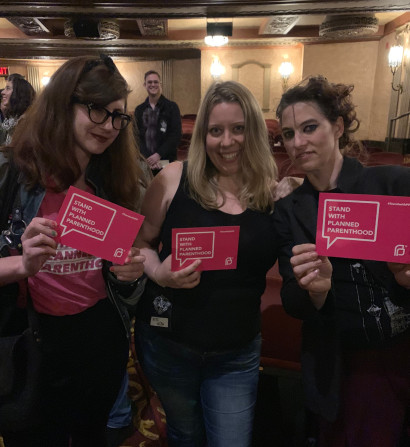 (all photos above by hayley rosenblum)
and michael, whitney and hayley as THE PATRONATORS!! 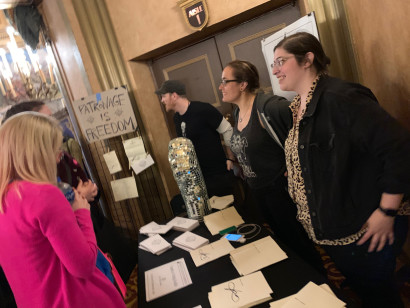 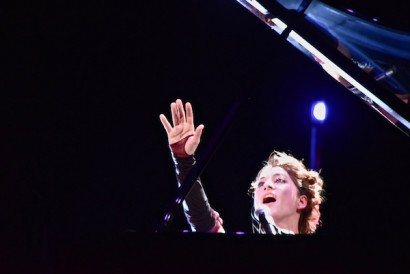 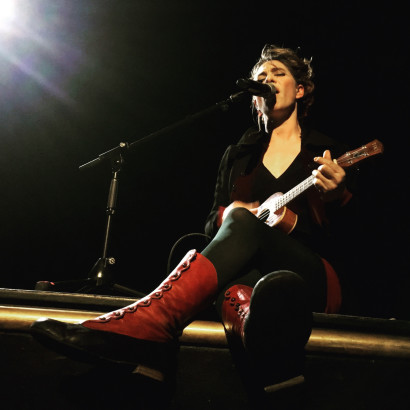 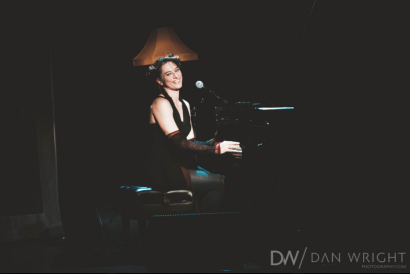 THE LEG LAMP OF NEW YORK….. 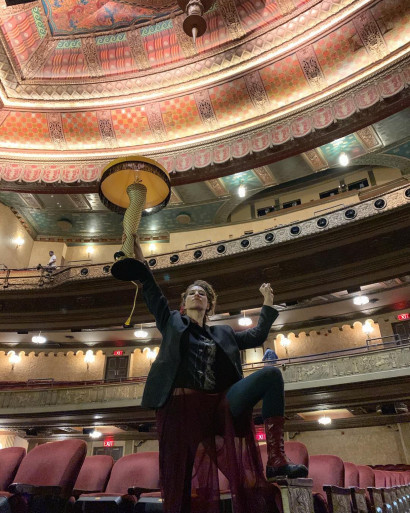 i also just (JUST) found out some horrific news, about the death of queer irish journalist lyra mckee. she was shot during protests in derry a few days ago…and i’d like you to read about it here.

lyra interviewed me a few years ago (around 2014, 2015 i think) about beacon reader, a now-defunct crowdfunding tool for writers that i was really excited about. (many were). we stayed in touch. i went searching through my email to see the last thing she’d written to me and found this….from february 2915.

she was asking about anthony.

it was about 4 months later that he died.

now they’re both gone. life is so strange.

it all just keeps happening, doesn’t it.

ash’s new obsession is the wizard of oz.

he really likes listing all the characters. the scarecrow. the good witch. the bad witch. doro-thee. the lion. and the tin man, who i think is his fave.

we’ve been playing the soundtrack around the house and it makes everybody happy.

is it just me, though, or does the wizard of oz have more layers than i can unpack? i’m just starting and it’s getting head-spinning. if the whole thing really is a wish-fulfillment dream….WHAT DO THOSE FLYING MONKEYS REPRESENT? and the trees that throw apples at you? was dorothy anorexic?

IT IS ALL AN ILLUSION. DO NOT FORGET.

so much coming down the pike.

wish me luck in DC with the grown-ups

reading comments as much as i can before getting ready for this red carpet tonight.

GODDAMIT I LOVE YOU

ONE DAY ORDERING WINDOW next week for the 2018 holiday card! – available to patrons only.