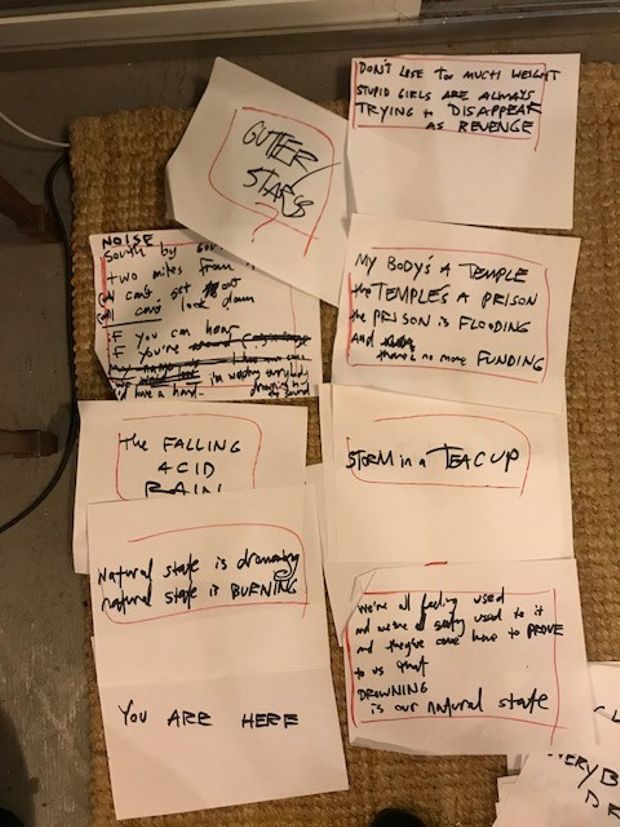 the ingredients. (“drowning in the sound”)

so – even though it was a race to the finish, goddamn am i happy with this song…i’m so glad you all are digging and listening and sharing, i’m seeing iy out there in the Real World sharing away and it’s wonderful.

a few pieces of good news….pitchfork posted about it this morning: https://pitchfork.com/news/amanda-palmer-shares-new-hurricane-harvey-benefit-song-listen/?mbid=social_twitter …

and so did the mexican indie music site, IndieSpace: http://indiespace.com.mx/amanda-palmer-comparte-nueva-cancion-benefica-para-los-afectados-del-huracan-harvey/ ….

it’s a friday and monday is a holiday, but i’ll get back in the saddle on tuesday and wave it around.

i thought it’d be fun to post this here, given the amount of writing you guys did in the lead up to the post….

this was my working list of ideas/lines/things grabbed from the comments (from the thread here). some of the mess below is right out of the comments and some is right out of my head…i won’t bother to mark the difference between the two, but some of you may see your ingredients in there. all of the little snippets in the list below were then written on pieces of paper (a picture of a few attached) and i stared at them. the ones that suggested a song got outlines in red and then i got to work.

a few of the things that stood out as going directly into the song, like visible chunks of chocolate in a cookie: the comment about whether a kid even knows what a broken record/skipping CD is anymore…the comments about feeling betrayed by your body… those stuck out and worked their way into the bridge “the body is a temple…”…and the line in the third verse about “do you ever feel that incredibly alone” was lifted directly from a comment.

also…nothing exists in a vacuum, and i really was getting raked over the coals on facebook (here, for joking about taylor swift and here, for sharing a post of lena dunham’s) the night before and the morning of songwriting. a lot of that made it into the middle verse (the “you’re trying to help” verse”.) so THANKS TAYLOR SWIFT and ANGRY PEOPLE OF FACEBOOK. who knew.

if you missed it, the lyrics of the final song are all on the project page (along with the finished song):

and again: THANK YOU all of you for all your stories, input, feelings….it made the thing.

there were two or three songs that popped out at me that wanted to get written, too.

the song about the gold, the “kintsukuroi – golden repair”…oh my god, that’s a song of its own and i’ll get to it, i hope. and there’s another song sitting in the back of my mind now…something about a statue…something about the lives of statues and how they begin and end. also very topical given what’s going on in this crazy ass country…..

all in all this was such a fantastic experiment…engineer fuck-ups and all.

it’s a reminder to myself that i can write and work.

unless you mind terribly, i’m gonna try to do this again. maybe even in london.

unpacking without a bookcase

weather metaphors everyone’s got one

the clouds that delight you and then rain on everyone

betrayed by your own body

the sun wasn’t out and so it was cold

you can xx push a button

Do kids these days even know what it means to feel like a broken record or a CD that won’t stop skipping?

how much time do we have

i’m even failing at falling apart

Cracking a heart of stone in 3 easy steps.

wilde quote: we are all in the gutter but staring at the stars

you’re a baby still soft and confused from the womb

asleep with the smell of your mother’s perfume

welcome to the dollhouse

and i should probably get out but hide in the car

i violently don’t want to be here

don’t lose too much weight
stupid girls are always trying
to disappear as revenge….
down the drain

miss clavell “something is not right”

more than the sum of their hearts

and if time is happening all at once, why….

slipping from time to time /  in different beds

Sometimes I don’t feel real. Like other people are fully fleshed character and I’m a stick person. –  SHADOWS / eclipse

spot a puddle and it’s clear and still and it perfectly reflects the sky and you just sort of stand there looking down at it and thinking, isn’t that little thing amazing, and I was here to see it. It’s a hole in the ground but it’s also the sky above.

maybe it has gone too far

Women are still killed by men. Babies still starve. Governments still torture. I am not enough to change a fucking thing

all the old people dementia. alzheimer’s

people telling you that you don’t deserve a mother/

so get into bed

Also how the very worst thing is when someone hurts you badly and then right in the middle of it they make you laugh; I never feel such a blinding urge to do a murder….Also how some mistakes, particularly political mistakes, when you know you’ve made them you hang on to them like hanging on to the tail of a balloon- and every second you don’t let go takes you further from the ground.

all the caterpillars we walked on getting to the eclipse

My childhood abuser is now a Parkinson addled old lady with dementia. These things are so difficult and hard to deal with ((hugses))

turning back the clock – trump

do kids even know how it feels to be a broken record?

are you breaking her apart just so that you we can watch you fix her?

a woman with a walker and children on the roofs

storm in a teacup

31 minutes to sound the all clear

some things are predictable, and some, not so much

who is alive are you are you

ash is
ash is
we all fall down

KIMONO – something in my suit

moon-hearts eclipsed by the sons of the revolution

“As the dark wave carries the whole sea, Is my life ahead or behind me? I’m a heartbeat… I’m a flatline, Between headlamps and brakelights.”

that’s not me, i am not that

“you wanted so much to have nothing to touch”

filling a broken heart with gold

building a bridge to love

my body is a temple

the temple is a prison

the prison is overcrowded and underfunded

I’m a very lonely religiously Jewish woman, unmarried at 28 and far away from a synagogue or other young Jewish people and I work at a natural/cultural history museum filled with taxidermy animals and mannequins and at this point I should probably dub one The Rabbi and just pretend I have a community with the literal thousands of taxidermy specimens around me. Do you have any idea how much it will cost to replace our adult African bull elephant? +-$12 million. You’d think that would scare management into looking after it, but no.

they tore my limbs from me

No one wants to swap places with me. Except when the car park is full.

“It’s eclipse season and the skies are full of smoke”

and history isn’t a statue
a statue of legs being bombed running….

the dark side of the moon

i can taste it coming
i can taste it with my tongue
and what i’m carrying is heavy
but i think i’ll still have to run
and if i can’t run i’ll have to swim
and if the water gets too high
i’m going to ,,

i’m not sure i have it in me

the better strangers of our nature

it can’t possibly all be as bad as it seems

maybe it’s not worth healing
not worth feeling

moon pulling everybody out of the water

or would you rather i just left the room

this isn’t a race

it’s a parade
rained out

the plane is going to crash into the moon…….