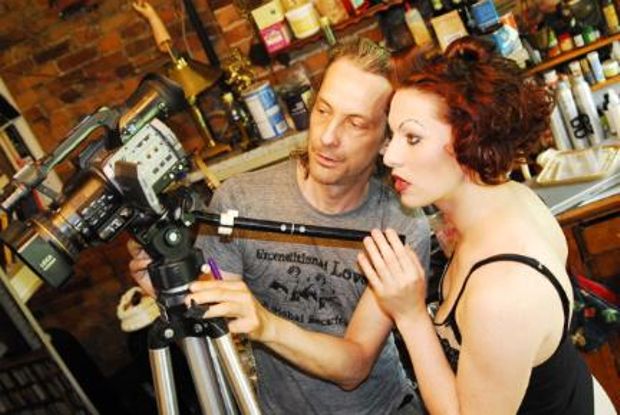 the adventures of professors pope and palmer

before anything: “drowning in the sound” has raised over $6k (that’s 100% of the bandcamp proceeds and 10% of the Thinging dough) and counting…im hoping that by the end of the month and with iTunes, etc, it’ll be closer to $10k for the texas diaper bank. i cut a check today for the current dough assuming that it is needed now, and i’ll cut the rest at the end of the month. thank you again for all your awesomeness/support/poetry…this is the shit that makes this patreon so astonishing. (if you missed the finished demo, it’s here, follow links.)

today commences our first day at wesleyan university, my alma mater. if you missed the memo, my long-time comrade and artist-soul-brother michael pope are teaching a class this semester. pope and i have known, lived with, suffered with and generally Made Arty Shit with each other since 2000. pope and brian viglione both came into my life that red-letter year and pope was always called “the third dresden doll”; he was friend, advisor, supporter, therapist, and resident film-maker…every single dresden dolls video and DVD ever shot (with the exception of “shores of california” and the “live at the roundhouse” DVD) were scripted and filmed in collaboration with michael pope. from about the years 2001-2006 we shared living space in the cloud club – i was on the second floor, pope was on the first, and we cranked together in mad harmony on our various projects. we may have, on more than one occasion, imbibed alcohol with one another.

we haven’t stopped working together and pope is still my hands-down favorite film collaborator…we know each other well enough that very few things need to be clarified. we can finish each other’s sentences.

in between living with/growing up with my parents and siblings in bucolic lexington, MA and making it as a street perfoemer on the mean streets of harvard square, i went to wesleyan university from the years of 1990-1994. i had a had time there. i’ll let the story unfold, i suppose, over the course of this fall since i’ll have a lot of time to think and write and reflect about it – but let’s just say they were my darkest years. i was confused, unhappy, disoriented, briefly suicidal, medicated onto zoloft within my first few weeks on campus, and basically stayed in a fog until i exited the place. i have a lot of memories of being in class, not knowing Why Anything, working hard to get good grades for fear of Disappointing Anybody, smoking a lot, reading a lot, trying to make friends and not knowing how, being afraid of the theater and music departments because started out feeling excluded and didn’t want to be at the bottom of the pile, and feeling generally miserable, especially in the winters, which were long, dark, cold and unforgiving.

needless to say: i don’t have many happy memories of the joint. i learned a lot of things for which i’m grateful. i stick staunchly by my over-arching life policy of No Regrets. but mostly, after i left college, thinking about it just made me agitated and sad and more that a little regretful.

i type those last few paragraphs with heavy fingers because i know my dear mom reads these blogs, and it’s always painful to share the truth of those experiences given that she worked her ass off and broke her back to pay me and my sister’s college tuition. no part of me is ungrateful for the experience, and it’s also always painful to complain about such an obviously privileged situation, i mean, face it, i was a rich white kid with rich white kid problems. but as wise viktor frankl once said, pain is a gas that expands to fill any sized vessel, and the truth of the matter was: i was depressed, afraid, and miserable. a lot of the misery actually stemmed FROM the fact that i knew how techinically lucky and fortunate i was and yet i still couldn’t manage to make sense of anything or get any perspective. i was 18, 19, 20. i look back at that kid and feel nothing but sympathy; there’s no guilt and there’s no anger, that shit doesn’t help, at all.

the good news is that everything improved (and continues to improve, thank christ) after i left college, and on a good day i can look at those four years as an incredible period of aching incubation, from which i sprouted forth like an enraged phoenix. but still, the sight of the wesleyan insignia and the photgraphs of the charming campus have always made me feel more queasy than anything else, and, as a professional closure addict, i’ve felt the urge to Fix This Shit and find some better memories here for many, many years. i’ve been back and done a few gigs, but nothing has erased the taste of lingering pain and weirdness.

so when michael roth, the current president of wesleyan university, called me up and said: “amanda palmer, do a thing?” i thought long and hard about what i could or should do. i was basically given cart blanche: i could teach a class, do a workshop, make a play, whatever. and i thought really deeply about what might actually be the most impactful if i was gonna spend time on campus with these kids who were going through some similar version (for better or worse) of what i was going through exactly 20 years ago. this was gonna have to be for me and for them.

and, while on a long and rambling phone call with michael roth, i hit on the idea that michael pope and i should come teach together.

part of this, i’ll have to admit, was me just not wanting to be alone. pope is one of my most trusted, understanding and emotionally supportive friends, and i didn’t really feel like walking back into the fields of my past without a hand to hold.

but also: what pope and i have learned by years of working together without a system, without a rulebook, and without any academic training….seems worth sharing.

on top of everything, i have my patreon roiling around in my head and i thought it would be incredible to make a project from start to finish – with original music by me – with the students. basically: imgaine an exercise not unlike the one we just did for “drowning in the sound”, except the prompts come from the class. and since wesleyan isn’t paying me to do this class (they’re paying pope, who will be commuting to the school every week for the next three months – i’ll only be coming in three or four times), none of this has to feel like a distraction from real work.

i’m also starting to feel old and like i’m bouncing around in an echo chamber of people over 40. fuck that. i’m actually really excited to be in a room of people under 25 instead of just conversing (and/or arguing with ) with them on facebook and twitter.

and, wide shot, this is something that, along with the record i made with my dad and the record i made with edward, has been on my creative/life/bucket list for the past dozen years or so. i am incredibly happy and grateful that the patreon (and you who support it, yes all of you) and my life have led me here and i’m ready to take whatever it has to show me.

i’ll tell you what happens. we will all be connected, and i’ll erase all the demons, and everything will be unicorns and rainbows and shining kegs forever.

i do plan to blog about all the demons. they need to come out, and i believe in the power of psychogeography. i’m here. it’s time, and i’m old enough and far away enough from the demons to face them down, shake their hands, and march into the sunset. so be prepared for some heavy blogging.

SAVE THE DATE: save december 9th if you are ANYWHERE near middletown, CT. there’s going to be a screening of what we create and patrons will get dibs on tickets along with students before we send any seats to the public.

AND…..i’m wide open to advice from any of you university / professorial types out there. hit me in the comments, i’m reading.

the first class starts in about an hour.