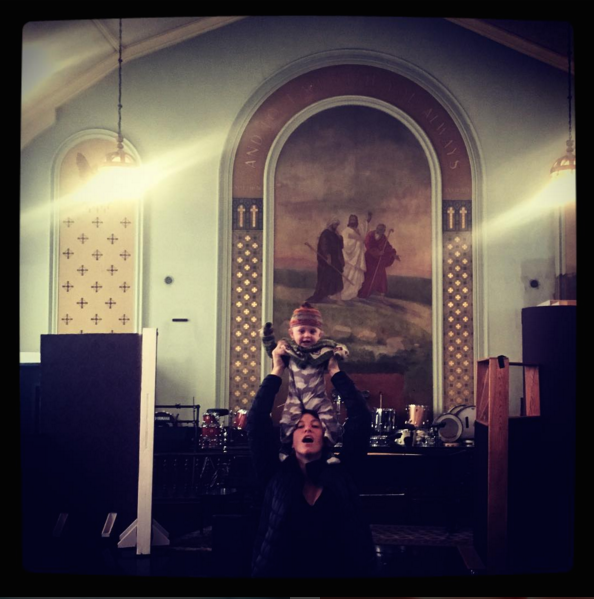 it was 70 degrees for weeks in new york while i travel around and i finally come home after a winter of escaping the strange summer-like weather and BAM IT GODDAM BLIZZARDS ON MY HEAD. seriously, no. please. why.

i mean…i know why. climate change. i have karmic debt to pay. elves did it. i actually don’t know why. but i had to run out and buy warm socks today. i wanted to cry.

IN BRIGHTER NEWS, today i (JAJAJAJAJA!) went to a possible recording studio to potentially nestle in this fall because i am,…i think….going to work on a new set of brand spanky new recordings. see photo above.

yes….like, a full record. i’m pretty sure. i just have to find a babysitter. i think i can do that. once i unpack.

i feel liberated because i am FINALLY FREE of the decision that was plaguing me for OH SEVEN YEARS OR SO about whether or not to have a child. it was so mind-bendingly all-consuming that i’m only just recovering.

i cannot tell you how consumed my brain was for god knows how long. my mind was a schrödinger’s box full of babies and non-babies. everywhere i looked i saw babies and non-babies. my soul was a binary cradle-cage. it was fucking CRAZY. i didn’t have my brain to myself – it was married to indecision. for the few years before having this little human, it got even worse. i was consumed. i couldn’t make art, i was paralyzed by it. then i was busy being pregnant. and watching anthony die. and then giving birth. and then escaping the winter. and then….

whatever gas tank that fuels the large-decision making processes has been utterly depleted and rusted with the residues of death-ing and birth-ing. right now, just feed a baby, breathe, make a sandwich, make a record or two (so easy, it seems) and….the tank of decision-gas shall refuel, magically, with time and liquid clarity.

the bowie webcast is going to be thing’d within the next few days when we post the cast to the public. the team is working on an edit. since this is a public post, a reminder to patrons that the whole stream is still up and the post/password is here (this link will only work for patrons: https://www.patreon.com/posts/4924058).

also, if you wanna see the full line up (which was incredible…) brooklyn vegan wrote a full thang on the bowie tribute HERE. my award to most insanely awesome heartbreaking performance to michael stipe, whose piano-only version of “ashes to ashes” was…jesus.

2. THERE MAY SOON BE SPECIAL TICKETS GOING ON SALE FOR THIS SUMMER. that’s all i’m sayin. ahem

3. THE DAD RECORD IS GETTING CLOSE TO BEING REAL!!!! vinyl is happening. things are finally coming to fruition after my long birth pause. stay tuned.

it is so awesome.  i cannot wait to thing it.

MICHAEL POPE HAS A KICKSTARTER.

i have a lot of friends who do a lot of crowdfunds, and i don’t take time to pimp them all…but this one is special because michael pope is goddam special. if you don’t know michael pope…you actually probably do. he made ALL the dresden dolls videos (expect “shores of california”)…”coin-operated boy”, “girl anachronism”, “backstabber”, “sing”… and he made all the Who Killed Amanda Palmer videos…”ampersand”, “guitar hero”, “astronaut”, etc etc etc…he also shot and edited the dolls “paradise” DVD….my “hell” karaoke video for tegan and sara….the the list is endlesssssss.

he ALSO, most likely NOT known to you, created an EPIC experimental film about 15 years ago called NEOVOXER….which i’m in (i play two characters and if you blink you’ll miss me). the film is now LEGEND…. it’s not on the internet (horror!) because it was basically a cinema-live-only psycho-spirtual film event with live musicians (brian viglione of the dresden dolls was in the live ensemble, back in the day)…and you can see one of the old trailers HERE.

i love pope with all my might, he’s my art-brother. he’s one of the most soulful, pure of heart, passionate artists i know, and i always thrill in his successes, because he has brought so much greatness into my life.

the point….pope is BACK with his next weirder-than-what film undertaking and this time he’s using kickstarter. he is calling it SYNEMATIKA, and it’s the first round of funding for what he’s calling a “THREE DIMENSIONAL SCRIPT….LOVE LETTER TO LIFE”….just believe.

he’s locking himself up in an art-space for THIRTY DAYS STRAIGHT, with a 24/7 webcam…creating a living work of art that will blossom into a movie script. how we don’t know….but this is michael pope we are talking about so you just gotta go with it.

i urge all of you to support him, ESPECIALLY IF YOU’RE IN THE NEW YORK AREA (he’ll be doing shit and when pope does shit, you wanna be there in person, because he’s a one-man art-love-party on wheels)….but the whole idea of the film is that it’s worldwide, so wherever you are, you can support this and be involved with the pope family – it’s a good one.

and did i mention that brian viglione of the aforementioned dresden dolls is making music for it? yep. (the $25 level gets you the soundtrack from this round of art-making…it might seem pricey, but you guys are patron-types, so you might go for it).

here’s the link to his kickstarter.

i’ll see you there in the comments, i just backed him (obvi). rock love 4eva.

thats all for now. i luff you. back to a baby and a sandwich.