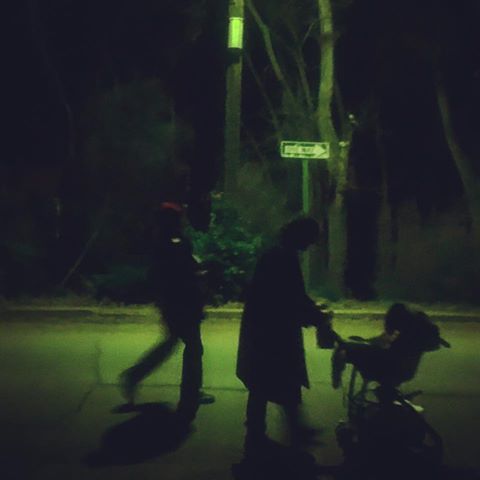 FIRST OFF: i am here to badger you if you are in NORTH CAROLINA, FLORIDA, MISSOURI, ILLINOIS, or OHIO (that’s right cleveland and columbus, i know you guys are out there, i’ve played too many shows in you for you not to be there. I;M TALKING TO YOU): GO VOTE TOMORROW! to convince you i made another dumb facebook song:

all the info you need to find your primary spot is HERE (i googled all of this, let me know if any of these sites or info is bunk, but looked good on first glance):

the picture is of neil looking like a creep baby-thief walking back from dinner with his friend (and now my friend) jeff tonight. it has nothing to do with the post. it’s just a great creepy picture.

greetings from back in santa-fe-land, where i’ve come for one last hurrah – neil’s recording an audiobook for the next week (for this: http://www.amazon.com/gp/product/B00RLRLB26/ref=dp-kindle-redirect?ie=UTF8&btkr=1) and i’m slowly but surely climbing email mountain and trying to get my head sorted for the spring.

i did a fun little q&a last night at the jean cocteau cinema and got to watch the complete ANIMATION SHOW OF SHOWS, which selected the patron-funded “behind the trees” (yay!) and i have to say, we were in insanely good company. i had animation-envy….the other ones were so so so beautiful and ours was so cute and short and DIY…but it gave me animation goals. if you want to SEE IT IN THE THEATER, i highly recommend, theater listings here (included: hobart tasmania!, austin, TEX, pittsfield, MA, cleveland, OH. and MANY MANY MORE.

a few random notes, before i discuss his royal purpleness….

LONDON!: i’m looking into doing a few tiny shows. you guys will get first crack at tickets.

NYC! MARCH 29 JHEREK&ME&GUESTS BOWIE WARM UP CITY WINERY SHOW: is very sold out, and we’re adding special guests as we speak – still looking into webcasting and will keep you posted.

NYC RADIO CITY MUSIC HALL BOWIE TRIBUTE!!! (NYC, APRIL 1st!) – this show, as i’ve said, is so sold out it’s hilarious (the tickets are still getting scapled for thousands) BUT BUT word on the street is the show is going to be webcast for free – i will so let you know. i’m so excited for this one. (info on show, and artists, including pixies, blondie, michael stipe, flaming lips and more….http://www.musicof.org)

GODDAM GORGEOUS ALLAN AMATO MACHETE POSTERS: you guys ordered up about half of them (and all the signed ones, instantly) and they’re now available to the public:

FROM THE dept of backstage discussion ….i’m revamping a few patreon things, i think, in these coming few weeks, so stay tuned for me to ask you for feedback on stuff. it’s been a YEAR! it’s time to talk tofurkey about some logistics things….i am plotting.

read this, please, it’s by my friend hasit shah from the berkman center (where we are both fellows):

i am, perhaps, the yin to prince’s yang. or rather, the yang to his yin. or a full black and white yin-yang to his fluorescent purple peace symbol. or the barbed curliecue that doesn’t quite fit into his monolithic unpronouncable symbol.

i spent my childhood (well, from ages 7-9), committed to the idea of marrying prince. or becoming prince. it didn’t matter, really. but i definitely had a prince poster above my bed that i faithfully kissed goodnight. little girls are weird. he was soon to be replaces by brian setzer of the stray cats (ages 10-12), thom bailey from the thomspon twins (age 13), and ultimately, robert smith of the cure (ages 14-15.) then i stopped wanting to marry rock stars and focused on my songwriting so i could turn the tables and make fuckers want to marry be for a goddam change.

prince and i are fighting the same battle on different fields.

we want connection but disagree about the wires, the channels, the ingredients.

if you read this article carefully, you’ll see more similarities between me and prince than differences (note: prince’s new power generation very similiar to patreon, except i’m not paywalling content, and i’m not making it a yearly chunck of change…but i am trying to band everyone together under one umbrella).

not mentioned in the article and of poetic note: when my band (the grand theft orchestra, when michael was drumming) was offered a new years show at termimal 5 in NYC, we decided to cover the entirety of “purple rain”. we worked really hard on the arrangements for this one single show. there is almost no evidence of it on the internet. prince and his spies had all phone and video pulled down within three days. good? bad?

anyway….i was really happy to be interviewed by my pal hasit shah for this prince article…there’s one quote from me but we talked prince for well over an hour. i wish i’d recorded the whole interview…i may ask hasit to send it to me and i’ll pop it up on soundcloud for y’all patrons…..

what are the pros and cons of witholding?

where is the balance?

most interesting question: is SCARCITY/MUSICAL MONOGOMY really an INGREDIENT of INTIMACY and/or COMMITMENT to an artist?

one could argue that the fact that i’m so free and easy about my music (take it! here! have it! can’t afford it! whatever! here! download it!) is the absolute anti-prince. but i still tour, i still charge for tickets, and i still prize an intimate connection with my peoples, as he does. where’s the breakdown?

the fact that prince is a jehovah’s witness i’m in an openly open marriage should probably tell you a lot here, but hey.

p.s. if you want to read my explanation of why i’m breastfeeding in the machete documentary, in response to someone’s youtube comment, its here.

ON SALE NOW: An Evening with Neil Gaiman & Amanda Palmer