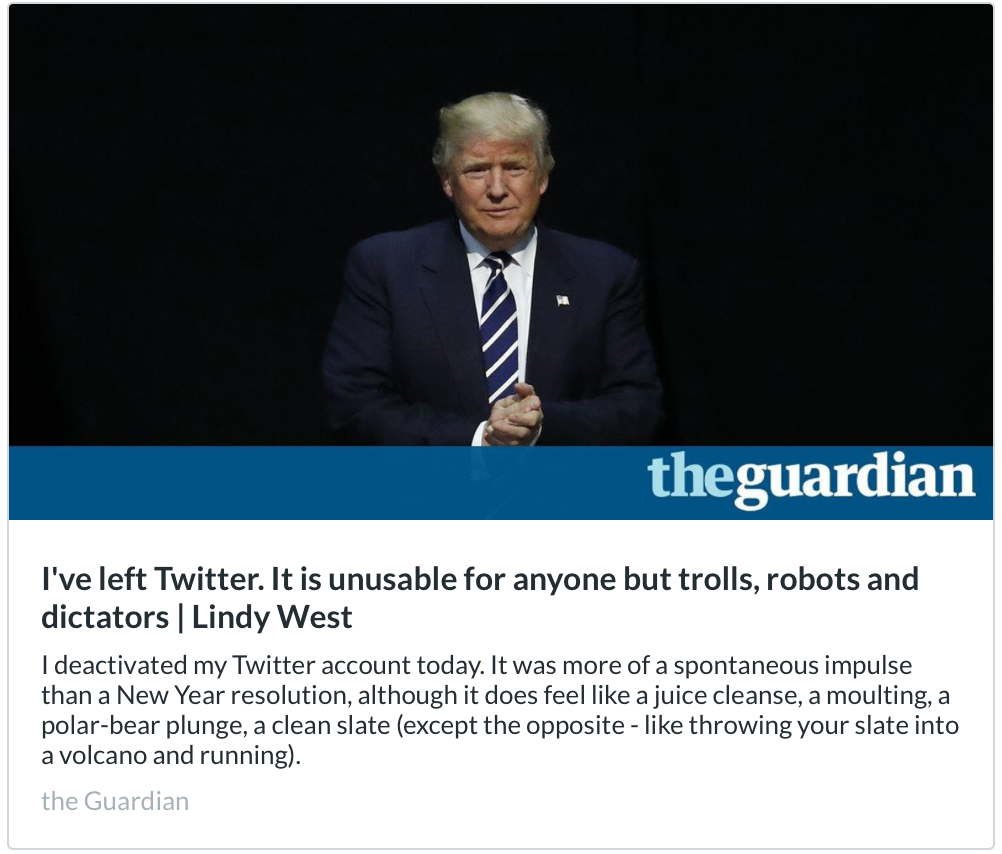 well….oh man. i can understand Lindy West‘ s feelings (read link, about why she is quitting twitter) but as an early adopter of and lover and recipient of the glorious connections and spontaneous online art-parties of twitter, i can say this: twitter has changed. a lot. recently. it isn’t as fun and as smart and as economical as it used to be. having just spent 10 days off twitter while i was in cuba, i really felt something in my soul heal. within 48 hours of coming back i was back on the tips of the internet pitchforks.

BUT…i refuse to give up twitter.  i feel this protective-ness about the platform, like: NO!!! NO!!! IT IS A WONDERFUL PLACE, don’t let it die!

so, even though i do see a few people giving up, i can’t. not yet.  it’d have to get way worse. i do find myself posting there less than i used to and looking to this patreon as a better and more intelligent/compassionate haven of communion, but the patreon tools aren’t nearly up to par with the twitter and facebook behemoths. if you look at lindy’s last metaphor (i.e. Twitter As Beloved Mall Friend Hang That’s Turned Fascist), i’m the one who wants to squat in the abandoned Forever 17 and turn it into a pop-up self-silkscreen bathtub gin bar. as we’ve learned here…i’m an optimist. and there’s still nothing like twitter for getting local information OUT and quickly, and for spreading the word about WHAT IS HAPPENING NOW – as a touring artist, it’s completely changed and shaped my life. but maybe i was just goddamn lucky, having twitter right when i needed it, when i went AWOL and solo in 2008 and it was this magical tool that wasn’t populated yet by the brands and the trumps and kardashians.

so….man, lindy, i feel her pain, so hard. i dunno. how are you guys feeling about The Twitter lately?

facebook is a whole other story – it’s feeling more and more and more negative by the day, and yet more and more of the world’s population is using it as their default communcation hub. it’s so frustrating.

either way….may the communication paths of 2017 lead us all to a more peaceful tomorrow.

i’m here, reading comments…and i’ll write a pot about what i’m actually up to in the next couple days.