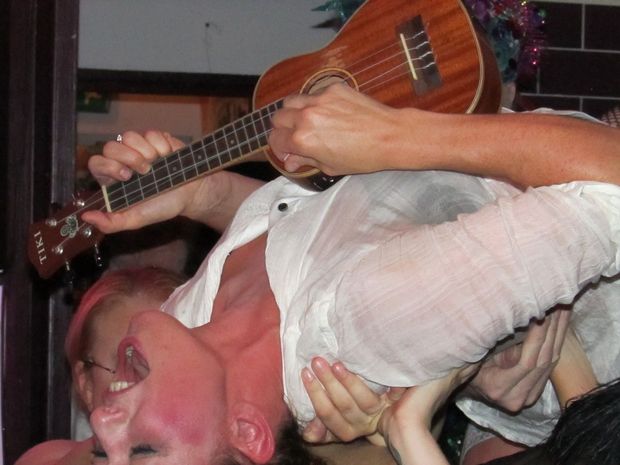 another song? why the hell not. let us make it. now.

*warning* – i’m asking you again, to give me some source material. down below if you wanna get straight to it.

i’m back from a short week in london, where i never really got over the jetlag.

ash played drums on everything in the house and got really into all his wooden animals. he turned two, and we gave him cake. he can say “bubble”. he likes marmite on toast. i may never forgive neil.

the pop-up/ninja/amazeballs gig at Her Upstairs was amazeballs. i communed with about 100 people in a beautiful little pink sweatbox covered with chandeliers and glitter up a creaky set of stairs covered in ivy.

a bunch of gorgeous drag queens and performers made all of us cry by doing beautiful renditions of dresden dolls songs and talking about how much the dolls influenced/meant to them, the ex-mayor of camden, jonathan simpson, spoke about the importance of LGBTQ awareness and what the hell we’re generally doing, and then i drank a bottle of wine and ploughed my way through an emotional set on a keyboard borrowed from a girl, serena, who lived in the neighborhood and LITERALLY ran to her house to loan us her keyboard because the one at the club broke. we also raised a shit-ton of moeny for the outside project and homeless LGBTQ youth.

andrew o’neill proved once again that he’s a stand-up genius.

the tickets mostly went to patrons which made it all feel even more homey and real. all in all, it was stupendously wonderful and i’m going to try to do it again. i also crowdsurfed with a ukulele. that went well. (this is meth, above on left, our amazing hostess, who’s club it was…her first drag act EVER was to “mandy goes to med school” and she revived it…..tears) this one of ruby wednesday by xxxleander on twitter. she sang a GORGEOUS new song she’d just written….it stayed in my head fro days (it’s still there): and this gorgeous one from elliott franks: in fact, here is a whole amazing album of photos by elliott franks (who’s neil’s cousin):

ok just one more, from elliott…

neil, smiling with teeth. he never used to smile with teeth. i’ll take some credit for that:

i already miss everybody in that room.

one thing that stuck out: i played “drowning in the sound“, the song we sort of all made together, for the first time to a crowd. it’s actually an incredibly good song. it’s a fucking keeper. it’s more than a keeper. i have no perspective on things i’ve JUST written. often i need to play things for an audience to know what i think of them. not always. but it helps.

and NOW? NOW SOMETHING IS HAPPENING: i’m without a child (well, at least without a PHYSICAL child, to, you know, feed and cuddle and all that) for an entire week for the first time since having a child. neil is keeping ash in london and i came home to try to get my soul and work and desk together. the longest we’ve been apart is three nights. this is going to be weird, and hard, and…

AHHHHHHH i feel fucking drunk with freedom. and instead of going back to our house in woodstock, i decided to come to my apartment in boston, to my piano, to my Things, to my homebase which hasn’t ceased to be my actual homebase and won’t until we decide where to move.

i was going to just take care of business and emails and clean and go to yoga and try to get my mind and body together, but then…

…then a few things happened.

most critical, i ran into a thing-flow problem. i originally typed cash-flow problem (which logically follows) but it’s more of a Thing thing. i have four(? five?) video projects currently in production, two of which were supposed to be locked and ready by the end of september, and both of which are late for reasons too boring to go into (and plus, they’re both surprises).

i decided that “drowning in the sound” came out so fucking beautifully i would try to strike lightening twice and create another song.

so i booked a recording studio for monday and tuesday in boston.

i’m going to go to the same studio where i recorded “bigger on the inside” and “the thing about things”. there’s a beautiful piano.

i will write all day tomorrow. i will record all day monday and tuesday if i need to.

before i do that, i want to tell you a few other things i’ve collided with in the last few days that have inspired me and are fueling my brain.

first was THIS essay by talib kweli from medium, “in defense of lauryn hill”:

if you’ve ever read neil’s great blog called “entitlement issues”, which is basically known as the “geroge rr martin is not your bitch” blog, it’ll resonate.

“The artist is a human being, not a product. Sure, the artist makes products that are for sale, but the artist is not forever in your debt because you may have purchased a product from them at some point.

When you buy an album from me, I receive money and you get music. It’s a fair and even exchange that begins and ends once I receive my money and you receive your product. If I don’t value myself as an artist — especially working in a market that has decided that recorded music is not worth spending money on — then who will?

i agree with 99% of that. and maybe it’s even just semantics…i always have a hard time when i hear people saying that artists make art “for themselves”.

i just don’t buy it. like: if EVERYBODY died and you were the only person on the planet like that poor guy with the broken glasses in that twilight zone episode…would you STILL MAKE ART? WOULD YOU? let’s leave aside the other things that would worry you, like food and water and stuff. let’s say you had all that. would you REALLY make are? reallllyyyy??? neil and i argue about this. i say no. he just comes up with some bery neil answer like “i would still make art…for the aliens”.

i feel like you’ve always gotta take it that one step further and say “artists make art for themselves for you.” is that english?

you get it though, right?

artists make art for themselves, yes.

but then they fucking share it, because sharing art is the thing that makes art mean shit.

art just often sucks when artists care more about the sharing part than the making part. we all know how that one goes.

anyway, talib’s article reminded me not to listen to the little voices in my head that said “what do you think you’re doing, writing these songs and getting paid”? i just had to switch channels to the voices saying “amanda don’t be a fucking idiot, this is eXACTLY what people signed up to your patreon for, and now all the people bitching that you don’t put enough music out and that they’re tired of paying for, like, webcasts and weird videos and shit will finally be appeased” but then the other voice was like “AH” and then i was just like: guys, shut up, all y’all.

so i’m writing another song. it will just have to be as good or better than the first one or i will feel awful.

and at this rate, we’ll have enough demos for a record in a year.

and maybe climate change will get us first.

on that note: not to put any ideas in your head, but this is the other thing that saw (besides “moonlight”, which i watched on the plane and oh my fucking god it really is that good) that drove a stake into my heart.

it’s neil degrasse tyson (who’s also here on patreon, i support him and so should you) talking about climate change on CNN;

….and then i went down the terrible mind-spiral of what’s happening to the planet, because i’m also reading naomi klein’s book NO IS NOT ENOUGH.

and now this. earthquakes, hurricaines…donald trump….

and there enters a third (small, but there) voice in my head that doesn’t give a fuck about writing songs or not writing songs or figuring out how to not go into the red this month, because i really start to worry that nothing i write (or do) at this point is going to save the world from certain catastrophe.

but that voice doens’t last long, either.

i’m not what you’d call an optimist so much as a now-ist.

writing and releasing “drowning in the sound”, and loving the recording, and raising a bunch of money quickly, and playing it for a group of people who cried all the way across the atlantic….and feeling like i was actually acting as a source of creation in the world and threading together a bunch of personal things from the people i love (you) felt like…i don’t know…enough. given my life sitaution, my talents, my processing power right now….i felt like this is just, i don’t know, fine for now.

the right thing to do, because i can’t do anything else, because this is what i do and so i’m doing it. i’ll make a plan….later.

so when you comment below (if you’ve managed to read through this morass of bloggage)….you can leave me ANYTHING, i’m reading tonight later and otmorrow morning, and writing allll tomorrow, but maybe think about that as the prompt.

not climate change per se, not specific politics, but maybe the idea of doing simply what you can do, your one piece of peace, your contribution to existence, your peace or struggle with whatever that measn. maybe it’s simple the act of not falling apart on a daily basis. maybe it’s keeping your parent from being lonely. maybe it’s watering a plant or a dog. who knows.

but tell me something about the feeling, or the thing, or whatever….tell me a story about something that happened where you realized you couldn’t take it all on…

i’m reading all night and morning.

i’ll try to get the song up by wednesday. i’ll post here if i’m going to do any streaming from the studio (this one unlike that last one has INTERNET!)