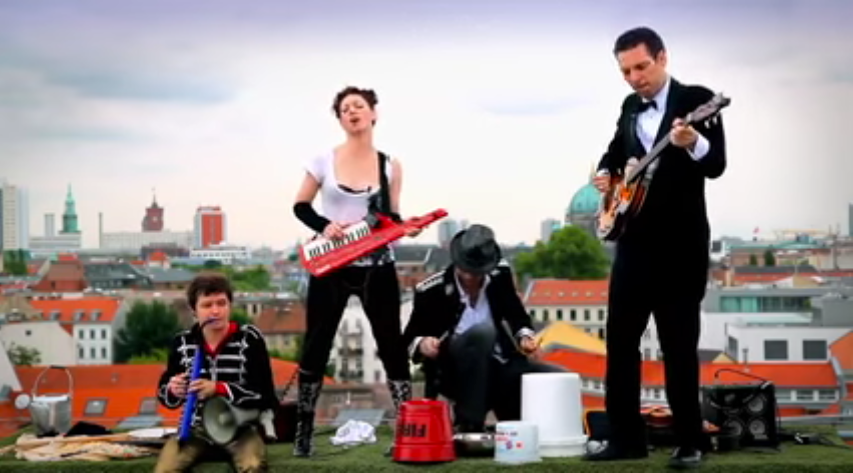 THE TWELVE DAYS OF AFP-NESS continue…..

this version of “lost” was filmed for a german TV station which has a series where they film bands on rooftops. it’s completely acoustic (except for jherek’s bass, which is plugged into a teeny amp).

i miss this band! jherek, michael, chad….we had some bad-ass times on that record. this was the first european tour for theatre is evil, and we weren’t tired yet.

(and special props to mcquilken for creative percussion! i think some of those pieces of drum were from the office downstairs….)

this song is easier to sing than to believe.

as you know if you’ve been following the story, i’m hiding on the west coast with neil and the baby, trying to take a kind of amanda-style maternity leave. neil’s kids (the other ones, the grown-up ones, and let’s just mention here that our new little boy has a brother 32 years older than him and how rad and bizarre is that) have been out here visiting and for the last few days we’ve had his now-second-youngest ms maddy gaiman all to ourselves. she’s here on college break.

i’ve been moody. even the sun can’t help me take control of the massively conflicting feelings and overwhelmtion i’m steeped in. i’m overwhelmed. i’m also underwhelmed. i’m whelmed in general.

when i am moody by myself i can usually cure it. i have a whole slew of techniques. i go to yoga. i meditate. i take myself to cafes and order wine or coffee depending on the time of day and tangle my problems out in the pages of my journal.

but now i have a baby, and i can’t do any of that quite the way i used to, and we’ve been surrounded by people. i like the people. but after ten days of being around people i’m starting to lose my mind.

“why are you moody?”

and i transmitted all of the above and included some other lists about how having a child is whleming and about how i can only do so many days of conversation about shiitake with human beings before i hit the wall of doom and before i knew it my dark mood lifted, mostly because i just needed to talk to someone about my mood, and maddy gaiman is about as non-judgemental as it gets. so this story has no point except i’d like to shout out maddy gaiman for being a fine lunch companion who lifted my dark mood, and also she’s a reminder that kids do not only have to whelm you, they can also de-whelm you. so thanks maddy gaiman. you’re a good kid.

this time of year is actually pretty shitty for a lot of people, and i’m watching it all around me. everybody’s more generous, but everybody’s also facing darker demons, the demons that wait in the box along with all the tinsel and bulbs that don’t come out but once a year.

it was exactly two years ago that i spent christmas with all of neil’s kids, and found out the day after christmas that conor had killed himself. (i wrote a blog about it here).

whitney, who was also my doula, was also the one who called me when he died (we had all been hanging out in san francisco just a few days before) was here visiting a few days ago, and told me that she’s been navigating the dark and it wasn’t until she put two and two and together about the time of year and conor that she realized that the death had more to do with the mood than she thought. she was closer to it, she was right in town, she went into the room. i was on the beach, like i am now, with people who didn’t know him, and i had to grieve out on the sand, alone in a foreign land, and somehow try not to kill the family party.

i lay in the sand in the dark and let it run through my fingers and wondered how possibly it was to speed up grief.

does grief have a speed we can control? if it does, should we even touch those controls?

so yes. christmas-times brings out the light and the dark.

i’m reading the comments here every night before i go to bed.

if you want to use me (and the rest of the community here) to share about someone, or something, that you’ve lost, especially if the absence of that something or someone is louder than usual because of the holidays, tell the story.

when they die they go away.

but they will visit you occasionally.

p.s. if you’re a patron and reading this via email, make sure you click through to comment.

p.p.s. if you’re coming from twitter or facebook, join the patreon to support my art-things, and get these emailed to you! NINE DAYS LEFT of AFP-NESS.