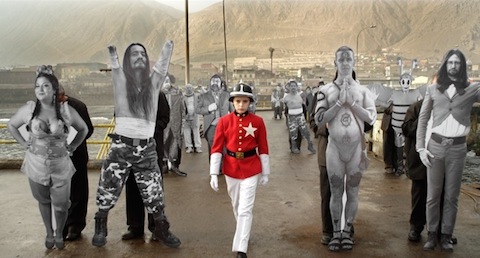 last night we went to see “the dance of reality”, the new jodorowsky film.

one of my favorite films of all time, ever, is “santa sangre”.

last year, when neil and i chose a run of films to watch in harvard square with the brattle theater’s kickstarter backers, it was one of my two picks. (the other one, another favorite vying for first place: “king of hearts”. neil chose “drowning by numbers” and “if…”)

i first saw “santa sangre” when i was about 15, around the same time i saw “the wall”, and both films deeply influenced the way i made theater and wrote songs. the unabashed stylized-ness of it all, the deep plumbing of the emotional deaths to splatter onto the canvas WHAT IT WAS that goes into making us who we are, the ingredients of our psyches…the how-to of what breaks a human while simultaneously showing the capacity that art has to whip us into ecstasy and heal us…this was, and is, my favorite kind of art.

alejandro jodorowsky hasn’t made a real film in 23 years (though the documentary “jodorowsky’s dune” did come out last year. haven’t seen it. but it’s out there, too)…he’s been hiding out in paris and biding his time. he just released his new film “dance of reality” and i went to go see it a few weeks ago, alone.

i didn’t talk about it at the time, it was kind of a late-night spiritual quest, and i was so blown away by what i saw i let it settle for a few days. i meant to blog. i never did. i do now.

last night, on a lark, i checked the NYC listings to see if it was still playing at the theater i’d seen it in. it was. one showing. 10:35 pm. i dragged neil. i don’t think i’ve ever, in my life, seen a movie in a cinema twice in a row. i couldn’t wait.

we sat there in the sunshine cinema with about 17 other people getting our souls stitched. i’m pretty sure jason webley was seeing it simultaneously last night in seattle. he also has a thing for jodorowsky.

it is a beautiful thing, sharing art this deep with those you love.

if you like “santa sangre” – this film is pretty much a duplicate, just longer, deeper, harder, softer. higher lower.

i cried, i swooned at the ridiculousnessness of the world, i held neil’s hand, i bit his thumb once when he fell asleep, he grabbed me during the part on the beach with the little boys, we laughed at the absurdity, we clutched each other for all two-and-a-half glorious hours of one man painting a screen with the human condition.

then we walked home at 1:15 am went to bed.
now i will edit a book all day and he is on a plane to san francisco to play at the warfield.

here is the trailer…

…and here is the list of locations it’s playing and/or opening soon. and some of those are week-long engagements and some are ONE NIGHT ONLY…so…check dates. acquire tickets. go.

i recommend a minor altered state – at least get a glass of wine on board. or go to a hot yoga class on your way and drink some kava.

if you’re in new york, it’s still at the sunshine cinema – if you make a party in my honor while i’m hiding in bookland, i will love you.

really: if anyone wants to get together a group outing (in your respective city), i started a thread on the shadowbox to help organize. post there or comment here on this blog (or post to this facebook thread) and see what you can make happen. point me to where i can help amplify. hit me on twitter, even. and seriously, check times/go this weekend – it may be gone before too long.

i want you all to see this.

“dead poets society” TONIGHT in hudson, nyc, brooklyn, and wherever you can have one!!

if found please return to owner

SUMMER FILM LIST! all the shit i think is currently awesome out there.