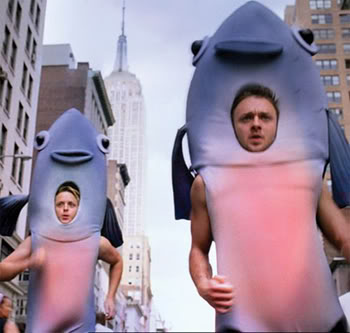 christ.i’ve collected too much in my head again and got stuck.

running, running, running around and don’t even know what i’ve been doing except that i’ve been doing a lot.
the solo record got re-mastered and it’s…..mind-blowing. it’s so good. it’s sooooooo gooooooooooooooooooooooood.
so i feel safe in a deep way. because as long as the record is amazing then i can fuck everything else up and it’s technically ok.
it will be released september 16th. that is now like christmas day for me. it is four months away. that seems long.
next week pope, kyle cassidy and i shoot film and video for the solo project for three days straight and then there’s barely a breath and the dolls hit the west coast.

i play solo tomorrow and the next day with death cab for cutie (looks like brian might show up for the boston show) and then we’ll play this last-minute benefit for my old french teacher’s exchange program on sunday (details on the calendar).

i went to cape cod with my family and watched the herring spawn.
they do this thing where they swim upstream & they’re so exhausted by the time they get to the top of wherever they’re getting to, they just barely have enough energy to pro-create and then they die. it’s very romantic. jason webley had been telling me that he goes to see the salmon spawn near seattle every year.

so i was on the cape, watching the herring spawn, and my step-father mentioned how they’re sort of like marathon runners, being all crazy and doing this terrible thing to their body for the sake of some weird higher purpose. and my sister shared the story about the original marathon runner, who ran 26 miles in wartime to get some crazy message to rome or something then dropped down dead.

and then two days later i was at home in boston and needed to go to the sprint store to get my phone replaced. i had forgotten it was boston marathon day. so i walked to the store but all the roads were blocked off and it was this mad undertaking of maze-iness to get to the store and i walked about 27 blocks in a spiral to get about 5 physical blocks away, including jumping some fences and getting crushed by throngs of marathon fans and families. people were just finishing the course a few yards from where the store was. and they were flopping like dead herring on the ground and the BEST part was that they were wearing these fucking crazy NASA-looking silver sheets that keep them warm. so they REALLY really looked like spawning herring and i really enjoyed myself. 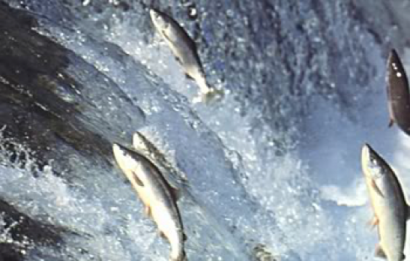 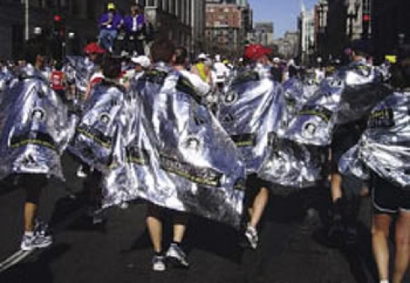 and i had to add this, because when i was googling images of spawning fish it popped up.
and how could i not, come on: 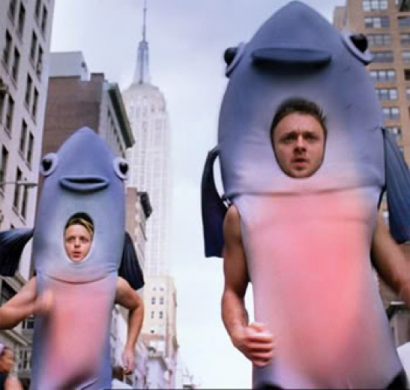 jason and i were writing back and forth, i was interviewing him over email for the press release of his new record (which features a picture of spawning salmon on the inside)…..i asked: whats with the fish?
here’s his answer.

JW: Have you ever seen salmon spawn? It is really intense, and kind of ugly. All of these fish, their bodies already falling apart, beginning to decompose even before they die, pushing and fighting their way upstream. There’s something so poetic about how these creatures that are born in little streams, go out and live in the oceans for years and then when they are old and falling apart they return or try to return to these places where they were born.

I remember the first time I saw them. I was walking in the woods and I crossed this little footbridge, and looked down and saw them. Dying fish flailing around among dead fish. It was really shocking to me, and somehow deeply sad. I remember looking down at them, trapped in this visceral struggle, and just thinking “fuck.” And wondering who was on the bridge about me looking down at me and thinking the same thing.

Metaphors like this can often feel cheesy or clumsy, but I really is something huge here. In my mind I feel like the salmon help me understand somehow all of our involvement in the middle east. Baghdad and Jerusalem aren’t just random cities in the desert. They are the places where our Western cultures evolved from. All three of the major Western religions, modern concepts of agriculture and just the basic idea of what a city is, all of these things come from the Fertile Crescent. We learn about it in school, but we don’t really connect the idea with modern geography. Baghdad is right there between the Tigris and Euphrates rivers. Western Culture is totally going back to its mother, and it is going back there violently. I don’t think it is right, but I do think there is a terrifying poetry to it.

I think similarly in my own life, probably in everyone’s, there is some kind of constant pull back to our roots. In ways we don’t really understand. Like the salmon – I don’t think they consciously know that they are going back to where they were born or that their struggle is noble and is perpetuating their species. I think they just know that they are doing this thing, and it is hard as hell and really sucks. They don’t see the bigger picture, and I don’t think we do either.

So anyway, yeah… that’s why there are fish.

there was a moment when i was watching all those herring and i really felt the futility of my own hard work.
a great big WHHHHHHHHYYYYYYYYYYYYYYYYYYYYYYYYYYYYYYYYYYYYYYYYYYYY are you working your ass off and making so many things to do only to collapse down down a few decades from now, you mindless herring-girl? i will let you know if i come up with a suitable answer. mostly because, i think, like our herring friends, i don’t know any other way of life. i am programmed this way. work. do. work. run. ja ja ja ja. stop? die.
i think this is why i dig yoga and meditation so much. if i didn’t carve that time out, i would never rest my brain. i would implode. balance be key.

this is the record by the way. jason webley is amazing. you can get it here:

i went to a lecture given by richard heinberg about peak oil.
it is real.
it is scary.
i am thinking about it a lot. life is going to change. and soon.
shit is running out. people are starting to starve,
if you feel like realizing how fucking insane the world is about to become:

i think i will be talking about this more soon. it’s bugging me out.

i went to my alma mater lexington high school tonight and helped with the make-up for the spring play, which was a weird version of faust. i loved that.
god the kids were so fucking talented. i wanted to eat them like fish. or die with them. or something. it was just inspiring.

i was in harvard square the other day and had an Ego Roller-coaster Ride.

i went to the post office with a friend and the pretty lady posting my 12 packages was like “anything liquid fragile or perishable” and i was like “no”
and then she asked “hmmmm. does this package happen to contain a copy of No, Virginia?” and my jaw dropped. she was older than me and didn’t look your your average dolls fan and i was so happy,
and i looked so damn cool in front of my friend. oh oh yes. they know me AT THE POST OFFICE. i am famous. yay. then a few hours later we went to cafe pamplona and were sitting there enjoying our coffees and musing and a pretty girl came up to us and was shy and adorable and told me she was a fan and we rapped for a bit and i was like: my ego is SO fed today. i am so known. damn, i feel fancy.
so then i went to the counter to ask for our check and there were these two older ladies sitting at a table, probably in their fifties and one was looking over at me and whispering to her lady friend and i was like: this can’t be.
and they tittered a bit and i got my check and the lady who had been looking at me said: “i’m sorry, you’re going to kill me for asking this….”
and i was like “no, no, go ahead!” and in my mind i was like: I AM SO AWESOME. i have achieved ultimate fanciness. i am loved and known by OLD WOMEN! my life is so complete today.
and she looked at her friend and did that giggly nervous smile you do and gave me the biggest grin and said

that evened things out quite nicely.

for the record: i’m not pregnant. i just have a belly at all times. can’t do nothing about it. even when the rest of me is rock hard, The Belly (i sometimes call it The Orb) is in full force.
people think i’m pregnant every once in a while. I find it charming. i once ruined some guys life….this was in the UK and he was a super-fan and his band was opening up for us. at the end of the night he congratulated me on being pregnant and I laughed and was like…..dude, i’m not pregnant. i’m just belly. or beer. or whatevers in there. but it’s not baby.
anyway, this threw him into such a panic that i got 3-page apologetic emails for a year. it was heartbreaking.

also for the record: i’m so glad i’m not pregnant.

and while we’re on this topic, i was reminded of this AWESOME short youtube clip called “amanda palmer & the belly” that surfaced from edinburgh last summer:

how to win friends and alienate people