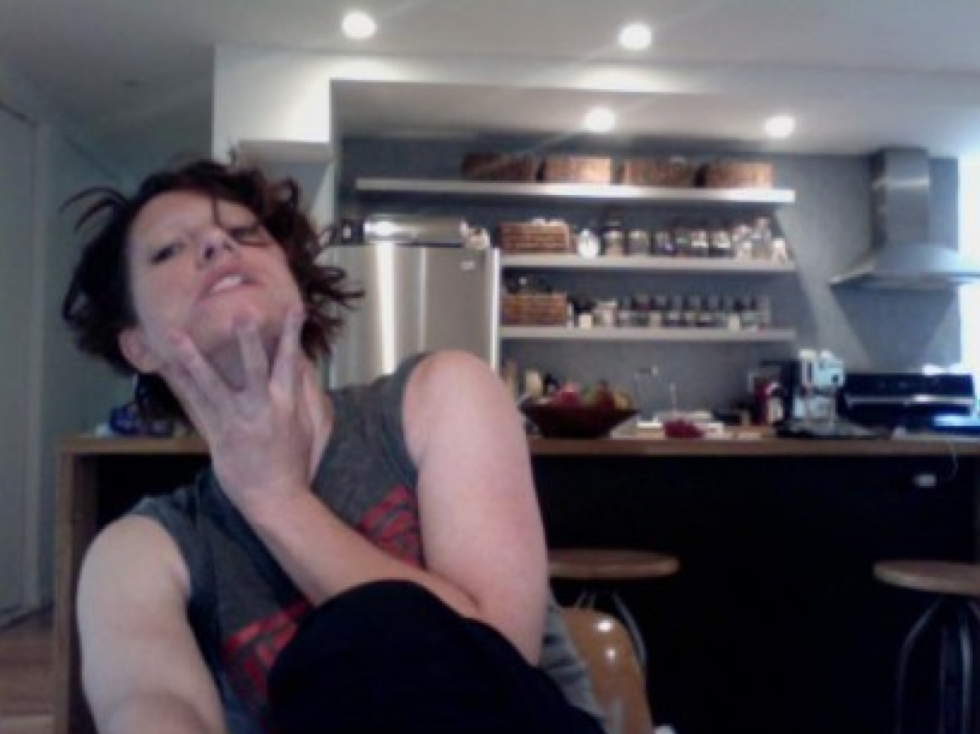 the overconnecting irony – starting the discussion.

(quick note to NYC: we’ve ADDED MORE TICKETS TO THE NEW YORK SHOWS by opening up the balcony of the theater.
the shows on friday and saturday WERE SOLD OUT. NOW THEY ARENT! get tickets here & please spread the word!: http://www.sohorep.org/current.html)

i tweeted this article in the NYtimes about how being constantly plugged in and multitasking is re-wiring our brains.

it came to me at a time when i was – as i am – juggling a lot of big, hard decisions about what to Do With My Life and How To Spend My Time.
it steered me in a direction i may have been headed anyway. or did it?

one thing’s for sure…i’m totally an addict, and i pay a heavy price. but i also reap giant rewards.

i’ve had infinite conversations about this topic with tons of people. everyone i know struggles with this stuff.
this morning, i spent a while over breakfast talking with a couple of new friends, felix and stephan, as we bounced in conversation between the new iPad, connection, nostalgia and Stuff – how we tweet, blog and never have our mobile devices too far from mind-reach, the whole endless conversation.

there are so many aspects to this discussion, and due to today’s mental weather i felt more certain than ever that i should just swear to the two witnesses over our espresso that i’d throw my mac & iphone over the brooklyn bridge and take a hiatus in india for a few months while my brain rewired itself into something more mindfully human.

the two friends with whom i was having my morning coffee were @felixsalmon and @stephangeens.
i’d met felix about 9 hours before this conversation took place… at around midnight when i arrived at his & his wife (@black_von, aka michelle’s) doorstep after they offered me a crashpad…through twitter.
(@stephangeens was his other houseguest, they’re both super-online finance-world people). i’ve been staying in brooklyn with old friends but since i had a manhattan breakfast meeting, i decided on a whim two days ago to twitter for a place to stay.

for those of you wondering how the hell this works in practice, it’s simple. on tuesday afternoon, realising that getting back to brooklyn after my show and heading back into manhattan would cost me an unnecessary load of annoying subway time and/or cab fare, i twittered “i need a place to crash after show in new york tomorrow night, who’s got a place in the village? email us@amandapalmer.net”.
a bunch of people emailed in, offering up their spare couches and futons, and i picked one that looked near, safe, and sane. this was felix and michelle. i scanned the options, forwarded their tasty email to @hayleyfiasco, my downgirl, who emailed them back for me & got their digits and the low-down about how late they’d be up (she offered them tickets to the show…they were already coming). and we were set to go. i didn’t think twice and showed up here last night after we got offstage with a bag of merch for them and had a lovely glass of wine and fantastic conversation waiting for me (and felix’s espresso this morning was unparalleled). i slept on a wonderfully comfy futon in michelle’s office (she’s an artist and her work is great: http://michellevaughan.net) with a stuffed elephant who kept me company: 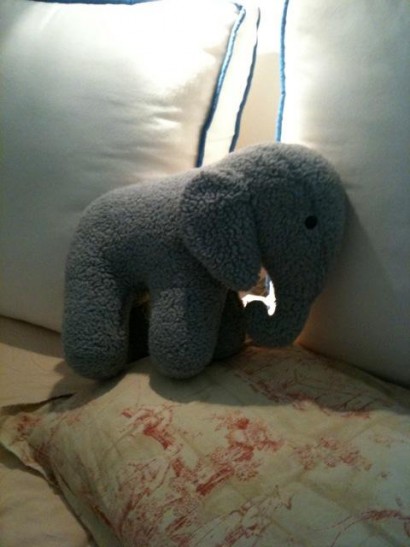 so…how can i throw my devices over the brooklyn bridge?

it is the very nature of my constant connection that makes things like this kind of insane couch-surfing magic possible.

i talked to neil last night (before sleeping & while cuddling the elephant) and told him i’d realized that this was actually, come to think of it, the first time i was staying at a random found-through-twitter-or-blog crash-pad all alone, since usually i only do this when i have giant groups of people/crews to save on massive hotel bills. usually if it’s just me, i hotel it. he called me brave. i don’t think of it that way. i think there’s different kinds of brave.

i’ve wandered through a hotel-oriented life where things are predictable and routine and “safe”, but a hotel feeds you nothing. i think it says more about my socially-addicted nature and deep-seated need for human connection (and, possibly, for free wine and espresso) that i’d rather tweet for a night in a stranger’s home than book a room at the best western, or even the plaza.

the plaza is not only expensive, it’s lonely.

i want to say much much more about the article – when i twittered it i got a shit-ton of response from people who saw their lives laid painfully bare.

when i’m home, or somewhere at rest, and being really “good”, i do not allow myself any time online – no twittering, no email checking, no nothing – until i’ve made tea & meditated for at least 10 minutes.
if i’m being REALLY good, i’ll head over to the yoga studio and eat lunch before i plug in and lose my physical body to the world of the brain-net for the rest of the day. on tour, i find this a lot harder and i reach for the iphone first thing in the morning, before i’m barely even awake. the more exhausted i am, the more likely i am to do this.

i try to always turn off my phone when i am eating with people. i try to leave my phone behind when going for walks, so i’m not even tempted to capture things, check things, and otherwise keep my brain on iPhone spin cycle.

other people’s phone habits and computer habits really fascinate me, as we all start drawing our own lines. jason tried to never log on to email after shows.
i’ve been checking email and twittering at intermission. i’ve been considering making sundays not only wire-free but perhaps totally silent. i talk too fucking much.

please comment, i want to know what you guys think of it and, moreover, how you deal with the jungle of online life & overconnection…
espeically if any of you have tricks or methods for avoiding the pitfalls of how living behind your machine, espeically if you WORK on a computer all day, like mr. addict in the story. 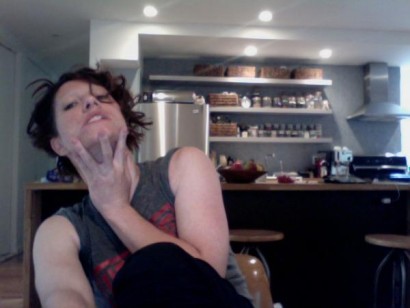 on the fourth anniversary of my marriage to this weirdo