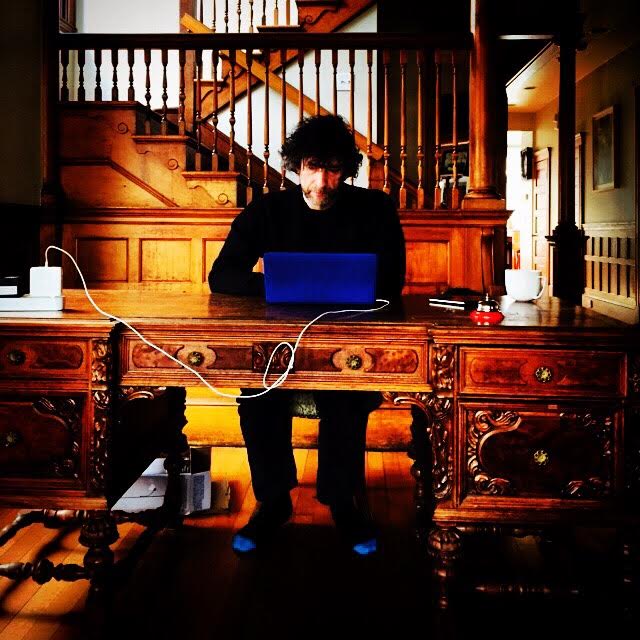 on the fourth anniversary of my marriage to this weirdo

today’s our anniversary.
it’s been four years since the day we got married, five years and one day since we got engaged, and six years since we awkwardly got together.

i took this picture of him this morning. we’re currently living in a friends new house while we figure out where we are going to go next. we still don’t know.

he’s a patient man, neil is.

we’re in an endless dance with ourselves, each other, and the internet, and the moves are strange, and new, and they change.
they need updating, they expire and crack and re-arrange.

we went offline for about three days ago and spent time trying to remember each other.

last night i left my phone somewhere, and i didn’t notice until noon today. i almost wished i could lose it forever.

he helped me find it. we traded clinging the “find my iphone” sonar on a laptop, running around the house, finally finding it (mysteriously) in the upstairs neighbor’s laundry room. we may never know why.

on the long drive back from being away, we had a funny conversation, the kind i think you can only have when you’ve been together for six years.

we talked about how skeptical and warn-y our various friends and acquaintances were.

we both got warned off.

(notice how the socks match the computer.)

we were no good, they tutted in their own turns.
users,
abusers,
philanderers,
bad news, us.

but now we’re a team.

congratulations, Neil Gaiman﻿, you’ve met your troublesome match, and i’m so glad i married your ass.

you continue to change me every day and i love you more with every passing tick of the long now.

the fourth of july