i’m in dallas, mixing the record at john’s. (i may NINJA somewhere outside next week. follow the twitter.)

my head is still spinning from five weeks straight of rehearsing-and-recording all day every day….then shooting a video (more on that soon).
then flying here.

i owe melbourne a big, long blog. i miss you.

the record is a masterpiece.

the band and all the guest musicians KILLED IT….the grand theft orchestra lived up to its majestic name.
michael, chad, and jherek were the most incredible, patient, intuitive musicians to work with, and john congleton, producer extraordinaire, captained the ship with mind-blowing genius.

i think it’s the best thing i’ve ever done.
and i’m starting to get sick of it already. like you do. too much listening, too much thinking.

i can’t wait to fucking put it out.
the kickstarter to preorder the record will launch sometime within the month.
one thing i do regret: that i didn’t kickstarter the record before commencing recording.
but there was a really strategic reason, and unavoidable: people who supported the “evening with neil & amanda” kickstarter campaign still haven’t gotten their stuff – it’s en route pretty much as we speak (download codes are coming in the next 24 hours or so and the physical goods are being readied to ship now, too. updates to neilandamanda.com are on the way).
i thought it would be tasteless to ask for support for project #2 before delivering on project #1. and i didn’t want to step all over the dolls’ tour in australia – that would have been in really bad taste as well. so i let it be.

but i definitely felt lonelier in the studio. i stayed active on twitter, but other than that, the whole process was just a mysterious mystery to everybody. so be it. maybe it was better to work that way. old school. in isolation. the record certainly didn’t suffer any.

when i was about 7 years old, i used to walk to one of next door neighbor’s houses to be babysat after school.

she (let’s call her mrs. marcy) would take care of me and her own two children, who were both younger than me, until my mother came home from her day job in the city and picked me up.
i have a lot of musty, plant-y vivid, memories of mrs. marcy’s household…she was more of a health nut than my mom, and she served us really strange snacks that involved carob and other foreign substances.

but one moment blares out of all of them. mister marcy was home, and the two parents were looking after us three kids. i burst into the bathroom on the first floor and mrs. marcy was sitting there, fully clothed, on the closed toilet seat. she looked at me with an expression that was a bizarre mixture of anger, terror, and just….utter exhaustion.

i was really confused about what was happening. she shooed me out of the room with two words that made ABSOLUTELY no sense to me at the time:

when i went in to record the album that i’m going to put out this fall, all i wanted was to have nothing else to do but Make the Record.

i meticulously planned my escape for MONTHS.
i wanted to do as nothing as possible, to give up as many mundane responsibilities as i could.
that included being a boss, a friend, an emailer, a blogger…and a wife.

it wasn’t that i didn’t have the time to do it.
i could have easily set aside 2 hours a day to do those things. easily.
but i didn’t want to. i wanted to go down the hole.

i told everyone i was going. and then i left.

my friendships, bless them, withstand a lot.

my really good, strong deep ones have learned to exist like plants in drought climates.
they sometimes go weeks, months, years in some cases, with no rain.
then, when it’s time, there’ll be a flood of love and attention.
the friendships that can’t survive the pattern…those ones die, i guess, or turn into acquaintanceships.

looking back on the last month i realize how important it was to me that i put up the long-distance wall.

amanda-in-person embraced life with a passion.
amanda-on-email-and-phone put up a Don’t Disturb sign. 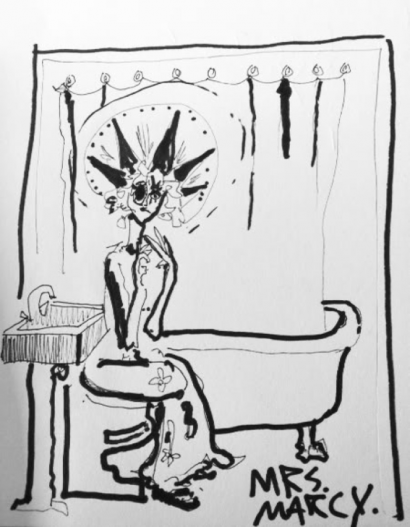 the paradoxes.
i set up an autoreply, but i still checked my email.
i didn’t want to feel responsible for answering any of it.
i would have marathon conversations on twitter, but not commit to having lunch with anyone.
i wouldn’t email people i knew well, but i would stop and have coffee with a stranger in a cafe.

it amazes me how much i’m able to love someone simply because they accept that i want to be alone to work.
that, in the true ironic twists and turns of love, is the ultimate turn-on for me.
the ultimate turn-off? clinginess. neediness. damnation.

i’ve always been this way.
pretty much every relationship i’ve ever been in has walked through this fire and mostly come out scorched and defeated.

i can’t believe sometimes that i found him, and that he found me.

we barely stopped long enough to GET married. it’ll still take ages for us to move in together.
none of this seems strange to me, though.
it only seems strange in the company of other people who look at me with compassion and horror, as if i’ve had a limb amputated, when i say i haven’t seen my husband for three months.

he wrote a book, i made my record, now we get to be together for a while and share what we’ve done.
and we’ll finally return to being in the same bed, where i’ll play him the day’s mixes and he’ll read me pages that he typed from his handwritten drafts.
and this, to me, this is paradise. this is the dream of a relationship i always had in my mind…and thought i may never find.

and there’s a kind of compromise in every chafing moment, and we’re both learning, bit by uncomfortable bit.

but i’m enjoying the work of love.

i just desperately wanted to get to the part where people stopped telling me what to do.

i never really wanted anything but to be as much in love as possible at any given moment.

love defined by the moment, not the movies.

when i think back on mrs. marcy, and her teeny household teeming with children, and her desperate search to grab 10 minutes of silence to herself in the bathroom (and failing…let’s not forget that bit), i look at my life and i just have to fucking laugh. i don’t have children, don’t have a household to run…i’ve deliberately built my life to be free of those sorts of responsibilities.
my idea of freedom is RIDICULOUS, right? i live about the most independent life i could have possibly constructed, given the art i wanted to make, and still…..AGGGHHGHGHGH I FEEL STRANGLED.

and mrs. marcy, in her suburban home with healthy children and plenty to eat, would probably stack up pretty lucky next to a mother and her kids living close to starvation in the sudan. but we don’t work that way, as humans. we compare ourselves to those around us, we compare ourselves to the selves we thought we wanted to be, to the selves we thought we didn’t want to be.

i think it’s funny that people are constantly saying “first world problems”…bashfully excusing themselves, as if to dismiss their own emotions as invalid compared to the next person. because of course these problems, the problems stemming from our privileged lives pale in comparison to the problems of real-ass starvation, war, extreme physical suffering.

well, of course. of course. things could always be harder – everything’s relative. and it’s never good to lose perspective. it helps. it does.

and OF COURSE the problems of those in the first world are first world problems. if you’re HAVING them, chances are….that’s where you are.

everybody’s got them, period.

you can’t measure human suffering with a yardstick. those who try to do it end up vindictive, even when they’re trying to be helpful.

because the minute you start measuring suffering, you invalidate somebody’s suffering…and that just never works. that’s where the whole shit starts getting ugly.

the song don’t lie: everybody hurts. everybody suffers, everybody feels pain. and everybody feels it for a different reason on a different day in a different way. and it’s all real….there’s no pain that isn’t valid, there’s no pain that isn’t “real” because somebody has it worse off. pain is pain. all you can do is feel it, accept it, move on and know that everybody else on this spinning ball of dirt is in the same boat, and we all need to acknowledge each other’s pain, no matter what the package, and no matter how big or small that package appears.

when we do this, that’s what keeps us compassionate brothers and sisters on earth.

will i occasionally still use the “first world problems” joke the next time i find myself complaining that the coffee in this bistro is over-roasted?

because it’s a funny fucking joke.

here’s me the day after we finished tracking the record.

looking at the sky above fitzroy gardens and thinking 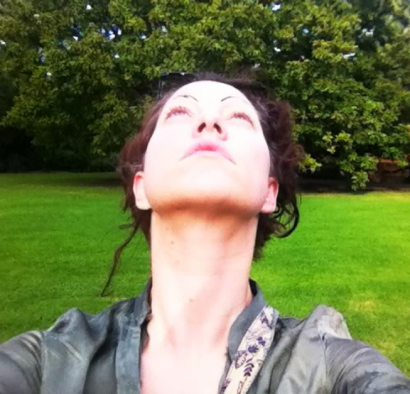 everything lately is just pointing me towards a more simple gratitude.

sometimes i can’t contain the amount of luckiness around me, regardless whether i’ve built the net to catch it or not….i have it.
i have it, and i think the only thing to do when you have it is stand in awe of it…make yourself a study in stupefied wonder.

p.s. speaking of fucking the critics….i made a comment on twitter a little while ago (“haters exit stage right, pursued by a bear”) that lots of people liked. so i asked the twitterverse if someone wanted to design it into a shirt. and someone on twitter, namely Félix Marqués (@felixmarques), mocked something up at that very moment, and lo and behold, we ACTUALLY made the shirt. limited edition. exclusively at post-war trade. PLUS there’s a special right now where you can get $20 off ANY/ALL orders of $75 or above with the coupon code “tomato”. go buy a shirt before they’re gone, the design is hilarious.

there are so many incredibly artistic people on twitter that i’m thinking of making this idea an ongoing thing and having someone random once a month design a limited edition shirt…..why not? 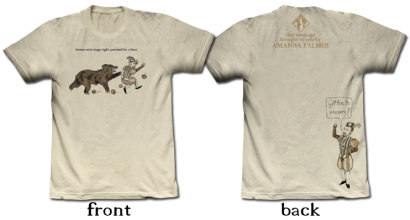 a way you can help the world and spend no money doing it.

a few small things you can do to make the world slightly better right now.