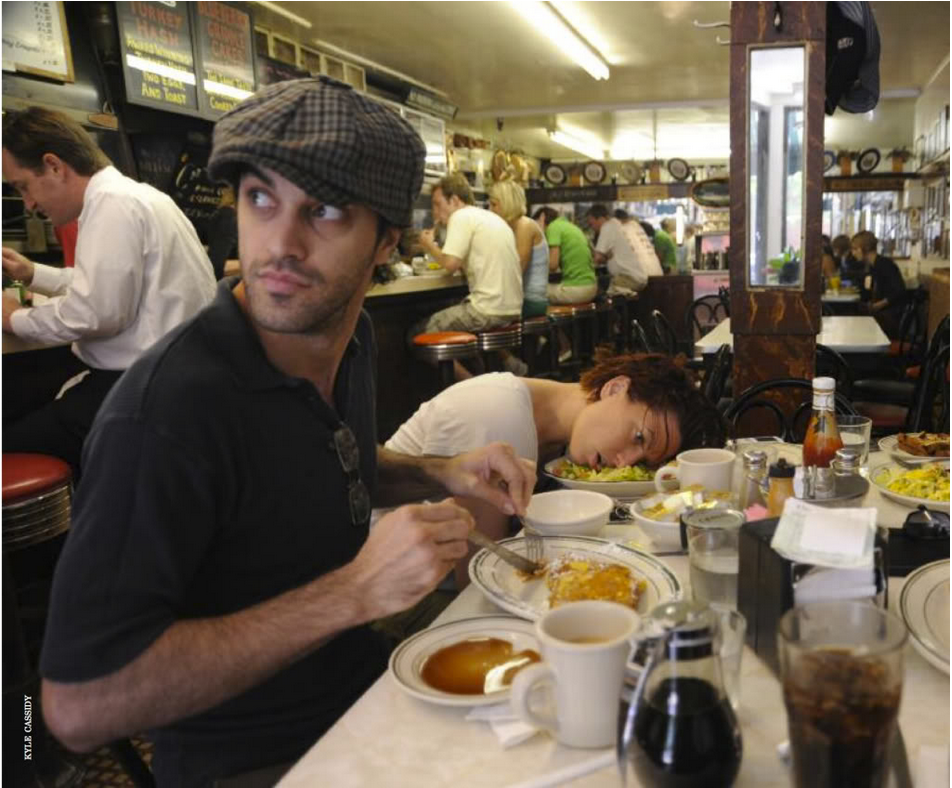 thank you all for all the cyber-hugs and wellwishes. it really does help. i love you guys.
things are getting better.

one more day in edinburgh, tomorrow we head to brighton for the show there on thursday (from what i hear, it’s sold out…hooray).
then onto london, vienna, amsterdam, and then home where i plan to sleep for a few days.

i asked for questions on twitter, because i figured….i’m in a question-answering mood. and i needed something concrete and simple to do.
here you go….

from @thisdyingbreed:
Any plans to release Trout Heart Replica officially? Been in love with that track since you performed it in Dublin in ‘09.

i fucking love this song. chances are very good it’ll wind up in the mix on this next collection of stuff i’m planning to release.

funny you should ask…à propos. the current plan is to take this current back-up band (the grand theft orchestra, who are with me in europe right now) and record a whole batch of new material this winter. not sure exactly how i’m going to fund and release it, but i’m pretty damn sure that’s the timeline. i’ve now got a backlog of songs and material, and it’s time to get back into the studio to record.

from @rossome:
Not sure if the answer is more than 140 characters, but will us fans ever see the footage that was recorded on Friday?

i assume you’re asking about the glasgow footage? drew forrest – who’s been filming lots in the UK – just uploaded a little collage of backstage footage:

from @neversaynikki:
how has social networking (ie, a not-so-personal personal life) changed who you are not only as a performer, but as a person?

oh good lord. i think i could write a book about this. maybe i should stop twittering forever and do just that.

honestly, i’m so overwhelmed by the wonderful possibilities of social networking, and grateful for the freedom that it’s brought me as a touring artist, that i find it hard to dwell and the (obviously) negative drawbacks. but as someone who feeds heavily on human connection for happiness, i can see within it the ultimate blessing and curse, especially as i watch people use networking tools to go above and beyond the bounds of what used to be possible to ALL GET IN THE SAME PLACE AT THE SAME TIME, and then squander their futurisitlcally-earned together-time barely even connecting with each other in real ways. i’ve watched entire tables of people give up on each other and dive into their phones, which seems possibly safer….? more fun….? more fulfilling? exciting? less work? in any event, i’ve also been that person. i think this is a longer conversation….and i often find myself having it with people over food, as we discuss the pros and cons and difficulties of social networking. i think the only way we can all figure it out is if we discuss it. and gently point out to our friends and lovers (and not take offense when THEY point it out to us) that maybe it’s not the right time to be facebooking and tweeting.

from @TarValanion:
How do you choose the places where you go and play? Knowing your ninja gigs, I don’t think you wait to be invited.

it’s actually very different depending on WHAT kind of show. this would be a great blog in itself, since i think the mechanisms of WHY and WHERE i play certain places is quite a mystery to most people.
but put simply: when i choose to play a general territory (like the UK and europe, or the states), i have a booking agent. they know my general needs (i.e. what kind of venue i like, and about what capacity i’m good for…in some smaller cities it’s only 200, in some larger ones it’s closer to 2,000). people also email into my website and offer me real gigs and festivals, and i got over those with my team and my agents if the offers are legit. when it comes to the less pre-organized ninja gigs…it all happens by accident, usually. sometimes by planned accident. on my last australian tour, my tour manager (eric sussman) and i BUILT in ninja-days, and i would ask the people of twitter where good spots would be. then, we’d simply do online research and try to narrow things down. or often, i know a friend who has a space or an art gallery perfect for cramming people into a free show. this sort of home-grown-show-planning is something i’d really like to do more of in the next year. as much as i love playing giant theaters and venues on some nights, i like the idea of keeping things intimate and in the hands of the people actually listening to my music. there’s nothing more depressing than dealing with venue people who give no fuck about you and give no fuck about your fans. the nicest thing about ninja gigs, is i get to avoid all that. ninja gigs are best done in a place where the fans can gather and be together easily, with no harrasment from the outside world, but in a place that’s free and open to everyone.
of course, i do run the risk of getting arrested sometimes. that’s a pain in the ass. we’re learning.
and there are boring adult issues like insurance and liability to consider (if someone gets drunk and breaks their body at one of my house parties, will their family sure me? i hope i never find out).

from @Debbracadabra:
How on earth do you and @neilhimself manage to make a marriage work w. your busy schedules? Or does that help make it work

from @jolenemeghan:
What are you most grateful for in this moment?

lately, i’ve been grateful for neil. i really love him, and i’m constantly astonished he came into my life.

canoodling after the evelyn evelyn show on the 17th: 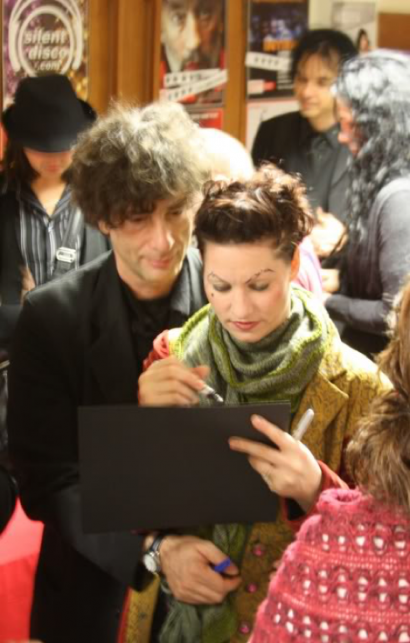 i’ve also been really appreciative of my friends and extendo-family of performers in edinburgh – margaret cho, tom and jen (and their others, ange and adam), andrew o’neill, my pals jonas and jamie from vegas who have been staying here…the folks i’m been running into but feel a very deep connection with. i appreciate how real everyone has been lately.

from @RabbiValesTales:
Here’s a Uke question: just getting into Ukelele. What’s a good brand, and which register do you prefer? Love your uke stuff!
(and from @missfrotrap:
Advice for aspiring ukulele players?)

i’ve found that many ukuleles are created equal for beginner purposes. i highly recommend, if you’re getting a CHEAP ukelele (like less than $30-40) that you buy one with a PLASTIC fretboard. as cheesy as that sounds, it’s much more likely to stay in tune than a cheap one with metal frets…the intonation (i.e. in-tune-ness) tends to suffer on those cheaper ones. then again, a good ukulele usually sounds best when SLIGHTLY out of tune. what i’d honestly recommend doing is going to an actual music store with a selection of ukuleles, instead of taking your chances online. that way you can talk to a human being who can look at your budget, try some stuff out, and hopefully get the most bang for your buck.

from @ailsakilpatrick:
if you were ever to settle in one place and not tour, where would it be? And what would you do?

i like new york city. i also like melbourne. those are my two favorite cities. given that i’m about to go back into the studio to make a big record, it’s unlikely that i’ll be settling down anywhere in the forseeable future…chances are, when that day comes, it may well be one or both of those cities. and what would i do? make music and theater. just with less moving around.

from @nataliefisher:
what’s it like touring with Michael? He is the one from The Astronaut, right?

nope, different ex. close.
michael and i were together from around the time Who Killed Amanda Palmer was getting birthed (in spring 2008, through the end of that winter).

from the WKAP book, photo by kyle cassidy: 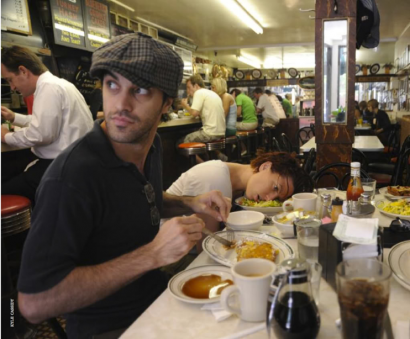 now, in a weird twist of fate, he’s the drummer in my new band, and we’re planning on co-creating a lot of the theatrical elements of my upcoming stage show together.
i mean, it begs the question: what’s it like doing ANYTHING with an ex? and i think the answer always depends on the ex. michael and i first made time for each as human beings because we were excited by and impressed by each other’s work, and we wanted to collaborate on something. then we started a relationship and didn’t collaborate, and i put out a huge record i went off on tour while he went off to grad school. then the relationship fell apart. then i got together with neil. then neil and i got married. and now, with all that under the bridge, michael and i are back to the spot where we started at: wanting to make art together. is it weird? i guess. but not really. being able to work with an ex feels very grown-up, actually. and to tell the truth…if i made a rule to never collaborate with any of the people i’d ever slept with, i’d be a very, very lonely little artist. it would render most of my working relationships invalid. ‘nuff said.

from @SeanSlater:
Are you coming back to Adelaide for Fringe in 2012?

it’s very unlikely….BUT it does look like i’ll be headed back to oz this winter, at least for a quick tour. more to come, stay tuned.

AND…one more piece of news before i go, comrades: as announced a few weeks back, mr. moxy gaiman and i will be making our way up the west coast of north america this fall for the indelible mr. jason webley’s show in seattle (on 11/11/11 at the moore theater). because no “time off” or “vacation”-like travels would be complete without a smattering of shows, neil & i are gonna do some very intimate and unique performances in LA, san francisco, portland, seattle, and portland. we are very close to announcing the venues and dates.

ALSO: for those of you have no chance of coming (and that’s a lot of you) we’ve decided to RECORD and release the whole shebang, utilizing kickstarter for production costs, CD manufacturing, poster-printing, and even some special soundcheck-attending-meet-and-greet-attending-asskickingest-of-the-asskickers VIP ticket packages. it should launch later on this week and some of the packages will go quick. make sure you’re on the mailing list and following @AFPwire on twitter to know when we go live.

here’s a sneak peak at the gorgeous image cynthia von buhler is working on with us…it’s changing a little bit before print, but check this shit out: 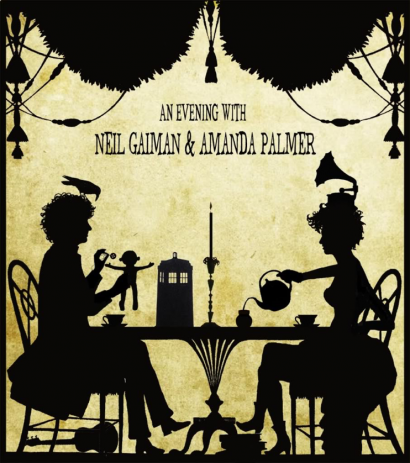 that’s it for now, chicas. 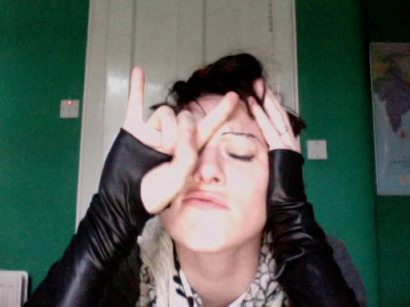 AFP Set To “Occupy This Album” With Live “Ukulele Anthem”