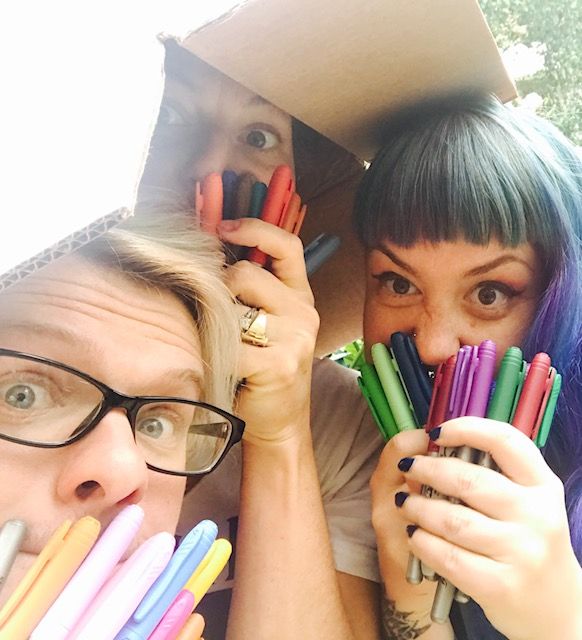 a few small things you can do to make the world slightly better right now.

love from london. i’m sitting in judith clute’s house (the wonderful painter who created the cover for “i can spin a rainbow”) and biting my nails while everyone in the U.K. (hopefully, hopefully) goes out to vote today.

yesterday i stretched out my arm and soul and signed 8,417 beautiful surprise-art-cards for the fast majority of you. the main photo on this post is of me, alex and wonderful brooke (who is also helping sell merch on the “rainbow” tour)….these mofos spent about 7 straight hours with me yesterday to help me sign. i am wearing a box on my head.

it was epic. we sang a lot of regina spektor songs and took turns DJing.

we used about 24 sharpies.

i posted a photo of my sharpie-maimed hand….. i cannot wait for you all to get your cards in the mail.

alex is on tour with me for the next while (say hi to him at the merch table, now you know what he looks like!) and it may take a moment for them all to get in the mail, BUT THEY ARE COMING.

meanwhile…being here while all this madness is going on is…sobering. meanwhile i’m listening to the congressional hearing with james comey, live. and eating grapes and pistachios. and trying not to think about what i’m going to do with my life. seriously. i feel like i’m living in this little micro-world – a baby with a fever, a killer period and i’m out of tampons, a beautiful tour for a surreal record, a grape, a pistachio…and meanwhile we’ve got trump, the FBI, reality winner (we are living in a dickens novel, seriously) and theresa may tweeting “I’m clear: if human rights laws get in the way of tackling extremism and terrorism, we will change those laws to keep British people safe.”

at which point my jaw hit the floor. “if human rights law get in the way…” WHO SAYS THAT? i honestly, actually cannot believe that a politician is saying such things in 2017. it shocks me.

i don’t usually rail on about politics but i am starting to think the world is going mad. a lot of my friends on every side of the pond are feeling a sense of utter weirdness and despair.

maybe we’re all just frail and stupid and don’t realize that politics and this sort of madness just bobs up and down, but i look at the extreme-right-leaning/fear-based/increasingly-racist free fall of the world around me and i think: is this our 20s moment? is this point we actually need to yell louder, before TRULY crazy shit starts to happen? like peoples’ human rights – so hard won over decades of progress and protesting – are taken away? i think that point may be coming. i ask for your understanding in these matters.

if you are fascist, racist, irritated by refugees, anti-choice ….or otherwise not interested in watching a 41-year mother try to use her artistic platform to bend the world into a slightly better place using the medium of songs, poetic-journalism, theater, video and who-knows-what-else, now would be a good time to drop your patronage. you might not like what i have to say. although, me being me, i would embrace you doubly if you had any of those views and you managed to stick around.

so, on that note…..i am sitting here at the moment, on my rare off day in london before i head back on tour tomorrow to sing to antwerp, amsterdam, paris and london (which is going to be WEBCAST DON’T FORGET, JUNE 13th 8:30 pm LONDON TIME), about a few small things we, as a community, can do to spread some love out into this dark, dark world at the moment.

there are a few things here i’ve been meaning to write about for a while, and so i’m going to bind them altogether here.

since the state of the mainstream media is what it is: support the journalists you think are doing The Good work.

right here on patreon, laurie penny has fired up her digital fountain pen/sword and is connecting directly with her readers.  if you don’t know her, she’s a brave and outspoken british feminist and journalist who’s written several books including “unspeakable things”, she’s written for the guardian and the new statesman, and she’s trying to create a stable support network of readers so that she can travel, investigate deeply, and not have to trim and prettify her articles for any particular outlet. she’s amazing. she’s currently got 550 patrons giving her almost $5k a month. you should join her patreon here.

since america’s health care system is what it is: let’s try to help alexandria walk again, so she can hold her daughter.

many of you followed my strange hospital-threaded story about how a clumsily left-behind set of car keys put me on an emotional collision course with a family/circle-of-friends, back when i was helping take care of anthony in the cancer-chemo-land. if you haven’t read the blog, please do.

long story short…i’ve made friends with a woman named alexandria, who was in a terrible car crash outside boston and, as a result, paralyzed from the neck down. she has a now-3-year-old daughter, alyvia.

while anthony was getting flooded with chemo a few floors away, i watched this family’s story unfold. i met alexandria’s mother (gina, who was exactly my age, and already a grandmother). i visited alexandria in rehab and, once she was released, i went to her house up in new hampshire with neil – while i was pregnant with ash – and found my heart breaking in a way it never had, because i had never been in a room with a mother who could not touch her toddling baby. there was something about being pregnant, knowing i had full use of my limbs, and watching 1-year-old alyvia about to knock over a glass of water while her mother sat in a wheelchair, unable to use her arms to scoop her up and tut and cuddle her.

so….there is a real chance that alexandria could begin to heal and hold her daughter, but it takes money, and i don’t need to talk to you about the state of american health care. she’s got a crowdfund going that has a long way to go, but i would be mis-using my personal megaphone if i didn’t come to you guys first and make a plea: please help, if you can. it is possible that with the thrust of this fanbase, we could get the word out and get this campaign viral and where it needs to be.

there are so many medical/personal crowdfunding campaigns out there (i sadly have to ignore dozens of them a day in my own feeds, because i can’t help everybody), but this one is real, legit and close to my heart as a mother. the threads never stop connecting.

you know what to do.

given what’s happened in london: please send love and support by giving to ARTS EMERGENCY.

since i have a show coming up in london and there’s been a really bleak mood around here lately, i reached out on twitter to see what good, progressive organization we might, as a global+london community, shine a light on at my show coming on the 13th at heaven, and i found out that neil’s already worked with these folks and they are AWESOME. from the @ArtsEmergency twitter bio: “Low income does not mean low imagination, low ambition, or low intelligence”. this incredible grassroots org stresses the importance of arts and humanities and tries to infuse them into spaces where people don’t have money and access. this type of work, i think, is so, so important in terrorizing times. when i reached out to them about setting up a table at the london show, they were over the moon. so if you’re going to be in london, GO VISIT THEM, they’ll be near the door, and if you’re feeling like sending love to london, just donate. they’ll really appreciate it:

http://arts-emergency.org
there you go. in these dark days, those are three relatively easy things you can do to combat the dark.

and i feel better already.

may we all live in the light.