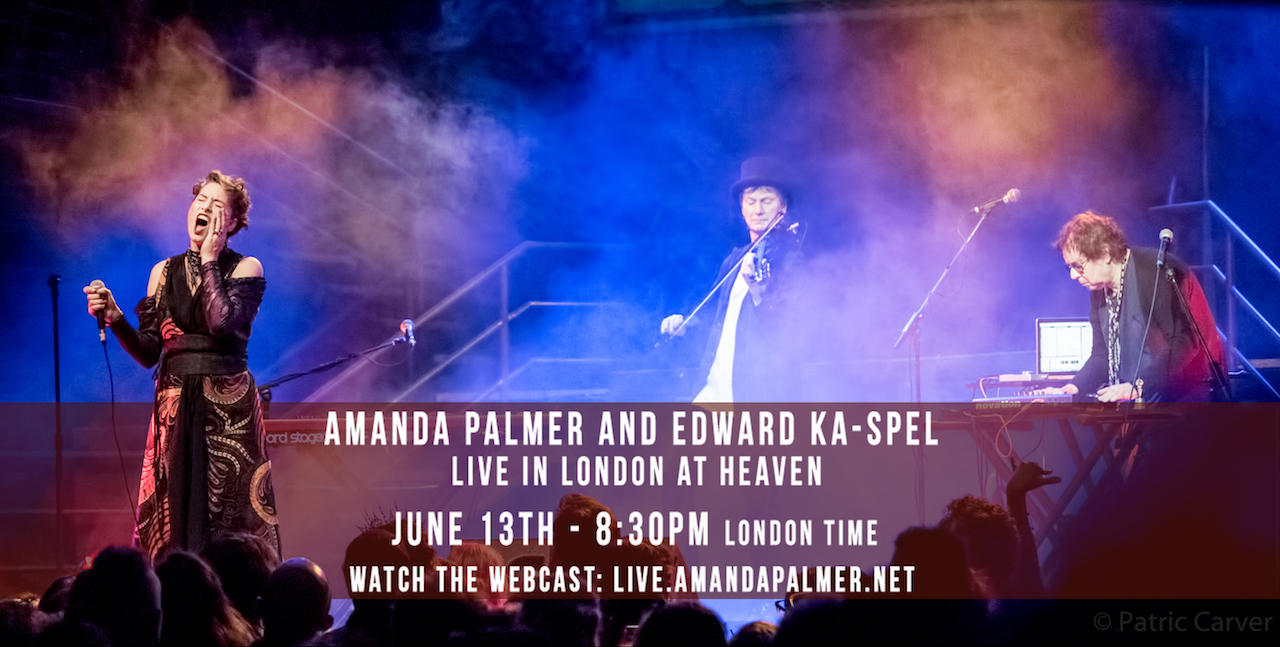 tonight is the crown jewel of the amanda-edward-patrick “i can spin a rainbow” tour: THE LONDON SHOW, which is also going to be webcast thanks to you all.

we’ve hired an entire london-based film crew; cameras, lighting director, internet team, film editors…and not only is the show tonight going to be professionally LIVE-streamed in all its delicious live glory but we also put some budget towards doing a post-edit so that all of the LIVE versions of these songs can live on the youtubes.  HOORAY.

the money we earn tonight, after all the crew and gear is paid for, is going to be shared among the musicians AND our tour manager/soundguy, joep, who has been kicking ass every night on the road with us and more than deserves the extra dough.

AND, AHEM, THERE IS A VERY SPECIAL GUEST.

i will tell you and you only:

they will be coming on at the first encore. shhhhhhh. it will blow your minds.

SO YEAH this is TODAY,

note: this webcasting platform is basically the SAME as huzza (which is the one i’ve been using for the past year or so) but it’s been transformed into Kickstarter Live, and has all the same nifty features you guys have grown to love about our webcasts.

and a moment of gratitude:

my friends and patrons….it’s so nice, being able to do this. i feel like i really botched the “Theatre is Evil” and the “Who Killed Amanda Palmer” tours in this regard…i never got super-simple and just you know, RECORDED ONE OF THE BEST SHOWS. i did all sorts of other weird shit, but i never really got great footage of the tours themselves at their apexes.

this is also part of the serious inspiring beauty of the patreon. back in the day, if you wanted to film a tour for posterity/youtube (and really film it WELL), you were just going to have to come up with $10-$20k magically, knowing you would never actually make a profit from the content.  it’s so hard to monetize recorded live content nowadays – even DVDs barely made money, and with youtube, forget it.

now i can film amazing shit for posterity and share it with y’all and NOT LOSE MONEY. AND GIVE EVERYBODY ON THE ROAD EXTRA MONEY. it’s just…astounding.

i am so grateful to all of you. thank you.

so, please tune in – it’s going to be gorgeous. and you paid for it.

and if you miss it, don’t worry, we’ll have the archival footage up hopefully within a couple of weeks (at which point we will press the Thing Button and charge you – i never like charging before we know the content actually got captured. all y’all patrons will also get bonus content…we are recording soundcheck and backstage, doing a few interviews, etc, just fer YOUUUUU).

okay, back to work. if you’re bopping about on periscope/twitter or facebook in the next few hours, i’ll be popping up there and sharing a little bit of soundcheck (alex is here with me, yyyyyyyayyyyaaaaaa, and i’m handing my phone off to him).

p.s. EXTRA CREDIT?? when the webcast starts, go to twitter and facebook and share the link!!! i’m relying on crowd power and word of mouth to get people watching! our last webcast was watched by over 10k people live and i’d love to beat that record!!!

LONDON WEBCAST is a GO….sign up to watch it live.