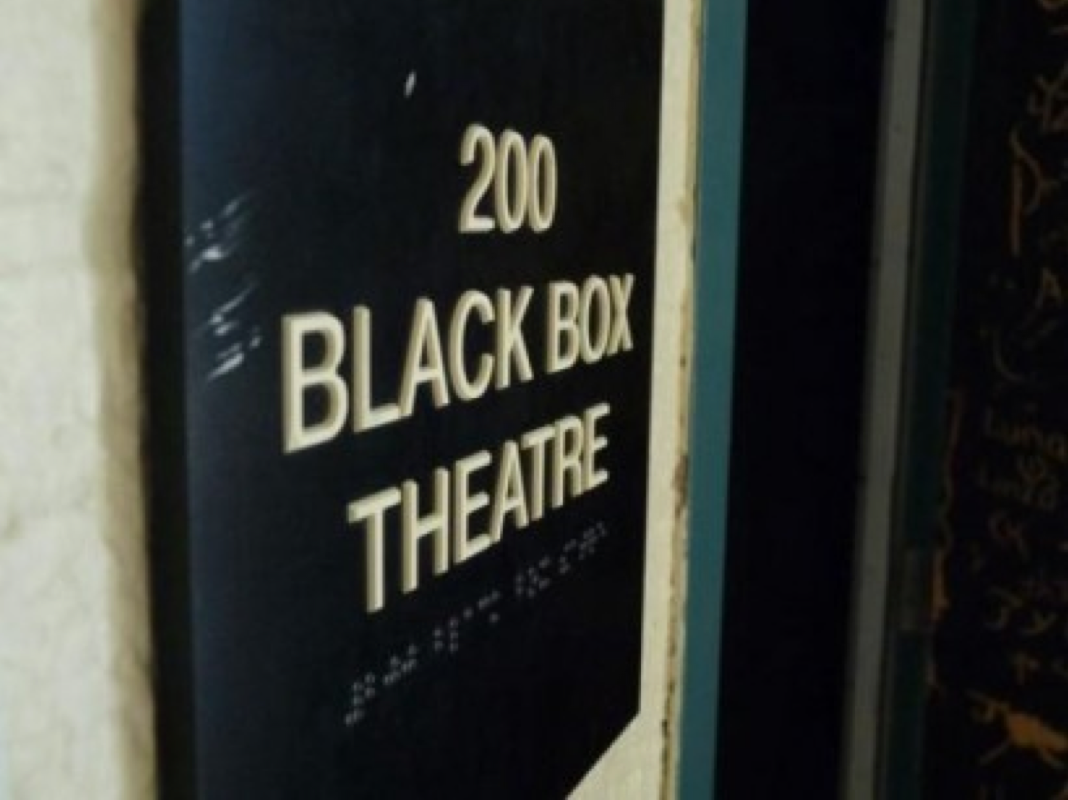 i’ve been sick for the last few days.

but i’ve been so, so, so happy. because i haven’t been emailing, twittering, surfing the internet or being otherwise attached to the electronic tit of love.

instead, i’ve been living a life in which i actually make art and then eat and sleep, which i haven’t done in years.

this project i am doing at lexington high school is the stuff of dreams. i have wanted to do something like this since…since…i suppose, since i left high school.

we had steve bogart.

bogart was a young teacher (probably in his early or mid-thirties when he started teaching – a year before i started attending the school).
he did the most fucked-up, challenging theater i’ve ever seen come out of a high schoool…and i’ve been around a while and seen a lot of good (and terrible) high school theater.

the year before i came tot he school (i was in eighth grade), bogart did a production called “alice”. it was, if i’m remembering right, an original piece that married different versions of “alice in wonderland” together, including jan svankmeyers. it was basically a play about drugs and death.

the next year, when i was a freshman, the fall play was a production of shakespeare’s “midsummer nights dream” with set and costume design inspired by the painter Miró.
the winter production was an original musical (our music director wrote the songs) based on the play “the good woman of szechwan ” by berthold brecht.
it was a musical about a kind-hearted prostitute who falls on hard times and must develop an alter ego (a man) who wears a mask in order to perform more inhumane deeds and save her business.
the spring play was a totally original workshop play called “infandum” that a group of 20 kids wrote from scratch about an older sister and younger brother. the play is performed, sort of like the movie “memento”, completely out of order (not quite in reverse). the older sister performs a love-fueled mercy killing on her brother, who is mentally retarded and being taunted my the world.

this was my HIGH SCHOOL THEATER DEPARTMENT. and that was only my FRESHMAN FUCKING YEAR.

my jaw hit the floor. this was an adult – a teacher – who was treating the teenagers like they were adults. there was no patronizing. there was real art. we were digging into ourselves and finding real things. my heart exploded.
for the first time in my life, i felt art the way i knew it could be, i was watching it happen and i was a part of it. my life was changed.

every year there was also a student written/directed/run night and students were encouraged to write, cast and direct their own short plays.
my sophomore year i resolved to make somethign amazing and wrote a play called “Don’t Drop The Minds of The Vegetables or How My Insomnia Turned LHS Stereotype”.
i don’t remember much about the plot but I know it involved a surreal therapist who keep trying to convince the protagonist (played by me, of course) that she was addicted to water.
i have the script somewhere, I’ll post it.

bogart continued to drive us with weirdness. we wrote weird collective plays every year, pouring ourselves into the process. feeling like family. the musicals were always bizarre, the plays were always twisted. bogarts classes were the only thing to look forward to besides music. well, and latin. and french. i was lucky: i had four amazing teachers in high school. bogart. dr. fiveash. mr. leonard. and gigi. they were my friends. that’s where i ate lunch. the students…i just didn’t get them.

the next year i wrote and directed  another of my own (even darker) plays called “I’m Sticking With You”, about a cycle of abuse that ran from a father to a daughter to a younger sister and involved a lot of scenes with music but little dialogue (velvet underground music used, of course, some legendary pinks dots, and some kind missile), had scenes that involved cutting off the hair of dolls and culminated in a scene where the protagonist (me again, of course) was tied to a chair while an evil man danced her around the stage, laughing.

i just unearthed the PDF that a friend who was in it sent me a few years ago…it’s here if you’re curious.

i was sixteen then.

my senior year: i spent real, concrete time – hours, days – writing my magnum opus. it was a play called “asylum” and was based on my favorite album of the same name by the legendary pinks dots. i should write a longer blog about it later, because i think i have some old footage to post, but it was work that came from my heart. i finally learned NOT to be in shows that i was directing and cast five great actors. bogart was so impressed by the show he selected it to compete in the regional drama festival. we were disqualified on the grounds that our piece wasn’t “real theater” since it has almost no dialogue.

it was after that play that i got my first piece of fanmail, ever. a girl who had seen the show wrote me a letter, care of my high school. she said that the play changed her life, and she didn’t know why, that it had made her weep, and that she wanted to thank me and the cast.

that changed my life.

i always went back to the high school and every chance i got, i would try to see the productions and help out with the make-up or just show up when i was in town. bogart continues to do outside theater and i would occasionally show up for a workshop. i saw his work flourish at the high school. i saw stuff in that auditorium that kicked the ASS of most theater i was seeing in new york. i shit you not.

so…bogart and i have talked for years about wanting to do something together. for a few years we talked about doing a production of “cabaret”

(i had seen his version at the high school and been floored).

when i was offered the onion cellar production with the american rep theater, i brought bogart in as my top choice as a director. (they wouldn’t use him. and the production, from my end, was a fuckshow. i had expected what i knew and loved – i had expected bogart-style work, with tons of connection and feeling – at least the sort of depth i’d come to love in high school. separate blog again, long story short – it wasn’t. i was crushed, the experience left me crushed emotionally.)

i wanted to get back to my roots.

using “in the aeroplane over the sea” by neutral milk hotel as an inspiration, the kids (a cast of 20) have been putting together a play through improvisation.
the process started about a month ago and i’ve been in the last two weeks of rehearsals helping shape the plot and characters and create the musical accompaniment, mostly songs from the record played live. often with me playing the instruments, but the whole cast and some extra musicians will be presenting the music.

i don’t want to ruin too much, but i can tell you the basics:
the play is about anne frank as imagined by an artist, and about how anne uses her imagination and fantasy-mind to escape the horrors she experiences in a death camp.
ultimately, it’s a play about how art conquers death and fear.
the working title is “with the needle that sings in her heart”.
it is amazing. i was writing an idea for a scene in cafe pamplona today and i wept. this shit is going to knock your dick off.

that’s all i’m going to say for now. i’ll write more as we progress.

the tickets are going to go up for sale within the week, i think. it will be announced THROUGH THE MAILING LIST.
there are NOT A LOT OF TICKETS. if you know you want to come, please, please, please don’t wait to order tickets, you’ll be screwed.

the show goes up in lexington, MA, at the high school on may 7, 8 and 9. get on the mailing list for more details.

here are some photos of my life back in high school. all photos by leo gaskell.
more later. 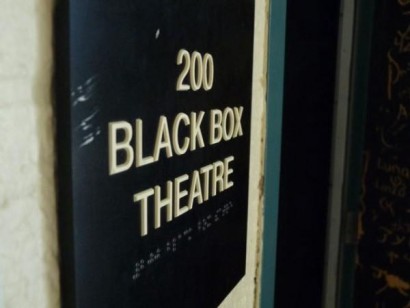 bogart, in vest, afp and students. 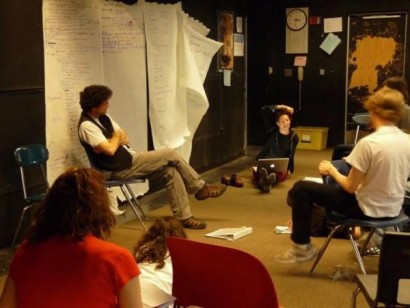 afp wondering how the fuck she got 20 high school students to listen to her. 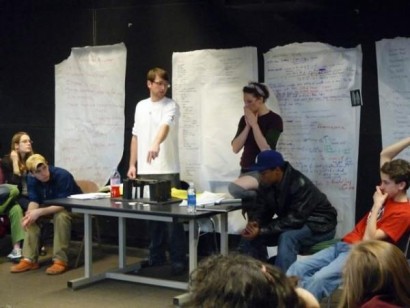 working on a newly-scripted scene. 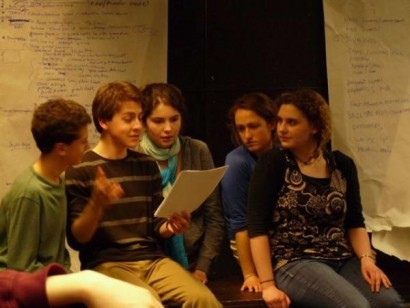 playing ball-tag. because why not. 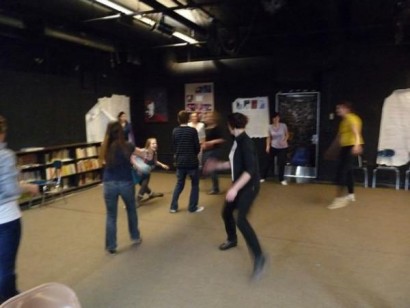 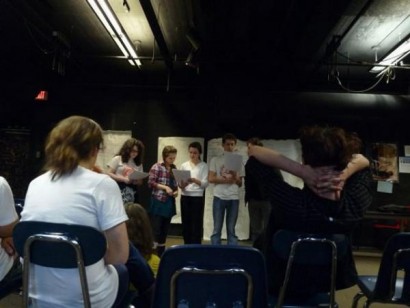 students working on a scene in the hallway. 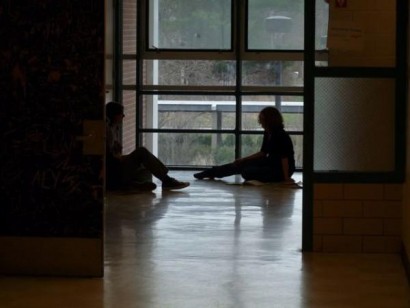 afp, bogart, and neil gaiman (who strangely appeared via transporter beam for a few seconds to take notes on the strange human race and their “creative habits” and vanished a few seconds later.) 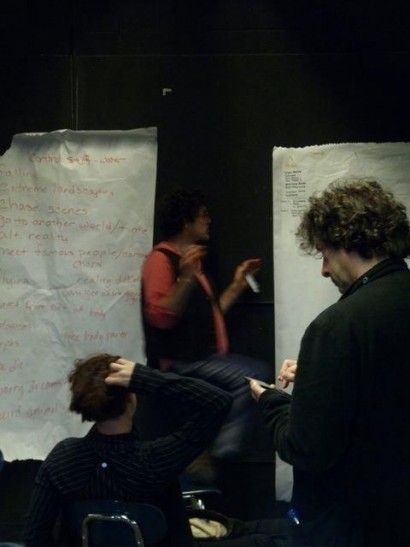 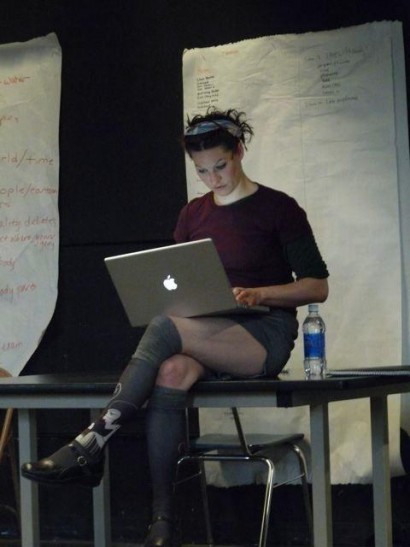 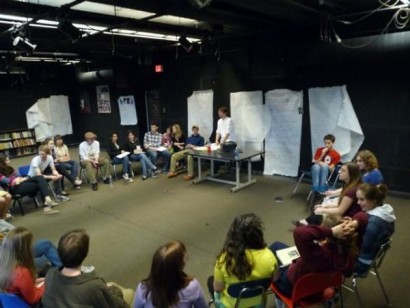 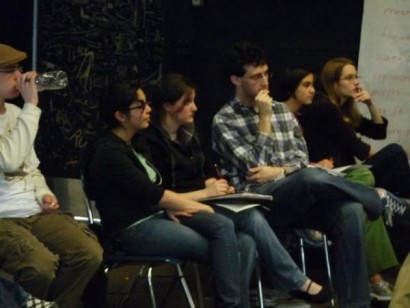 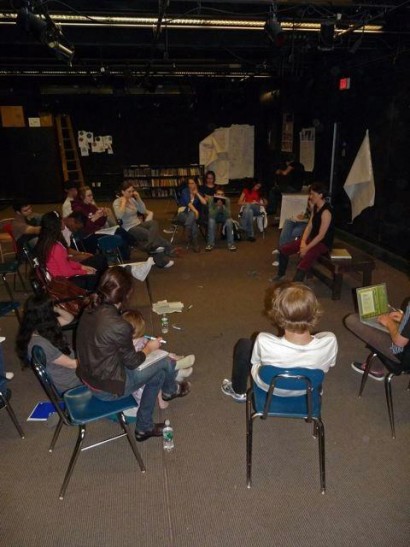 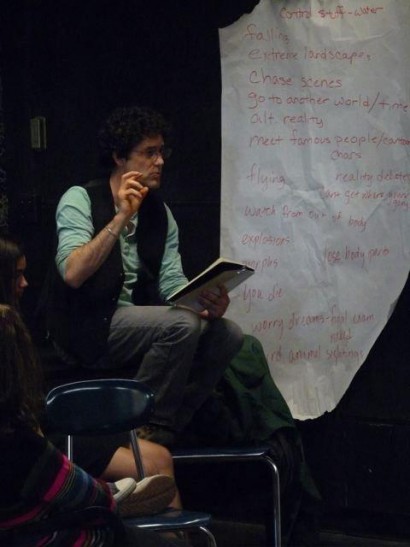 amanda introduces her invisible friend, Howard, for help with a particularly problematic scene. 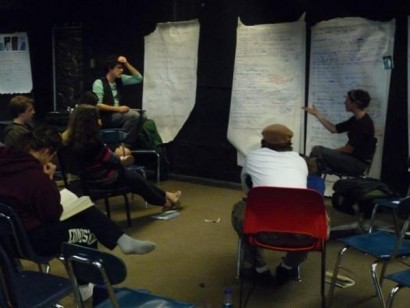 and yes:
for those of you who live far, far, far away, we’re working on finding a crew to film the show so we can post it up when it’s over.

the flu is abating.

p.s. NPR wrote a piece on the play because they thought it was a PRANK. because pitchfork.com announced it on april 1st. amazing.

the onion cellar, the lexington play, and What It’s All About.

MAP OF TASMANIA: a short history