get that sword away from my goddam vagina

i know i have REAL things to blog about…

nothing in the universe has made me sadder lately than THIS

i don’t think you need me to launch into a long blog about WHY it should be a person’s personal choice about whether to shave their head, armpits, face, nether regions, (ahem) eyebrows or legs.
the answer, to any thinking person, should be pretty fucking obvious. whatever floats your boat, friend. end of story.

but when i see things like this i get so sad.

especially after getting a manicure a few months ago (yes, i do that occasionally. i love doing girly shit when i feel like it. and it helps me stop CHEWING on my SELF) and asking the manicurist what was wrong.
because she was furrowing her brow and acting all serious and weird and well….something was wrong.

she told me that she’d just had a really fucked up experience because a mother had brought her 11-year old into the salon for a brazilian wax.
(if you live in an igloo or something – with internet – a brazilian wax is a full-vagina-hair-removal with hot wax.)
she had felt really morally weird about giving the 11-year old the brazilian wax and so she refused to do it, and the mother bitched her out and caused a scene and left, and not the chick was all shaken up, giving me my manicure.

what is wrong with this fucking world sometimes?

anyway, back to the clip,
the hilarious thing is that when i clicked the link i assumed it was going to be some awesome political commentary about how spending assloads of time shaving and waxing your vag is ridiculous.
(after all, it was sent by SOMEONE to ME, AFP, queen of the unkempt.)

then i realized it was yet another ad telling you that basically YOU MUST SHAVE but, since you have freedom, you get to pick THE SHAPE OF YOUR VAGINA.
awesome!

then i got even sadder.
i assumed that Wilkinson Sword was a BAND (tangent: good band name) and that the BAND Wilksonson Sword was cross-promoting something for, i don’t know, Gillette or some shit.
bands will do anything for cash now that nobody is buying records. hell, look at iggy. it’s the end of an era when iggy pop starts hocking CAR INSURANCE: 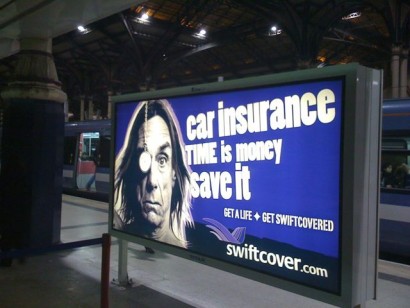 and i was sitting there, shaking my head, being all sad, until i googled wilkinson sword and found that they are NOT a band, but a historic GUN, GARDENING TOOL, MOTORCYCLE, SWORD and RAZORBLADE company.

wiki:
Wilkinson Sword is a brand name for two companies that make gardening tools and razors. Wilkinson Sword’s origins are in the manufacture of swords. The company was founded in London in 1772. The brand is currently owned by Energizer Holdings (for razors) and by Fiskars (for gardening tools). Past product lines have included guns, bayonets, and other objects such as typewriters, garden shears, scissors, and motorcycles. Wilkinson Sword has manufactured its products in three UK locations over the years: in London, Chelsea, Acton, Cramlington in Northumberland and Bridgend in Wales, where they made Gardening tools. In 2000 it closed its razor plant in the UK and consolidated production in Germany.

it made me wonder if the commercial was a budget-saving device to promote their gardening tools AND feminine bush-machetes.

maybe me having time off is not such a healthy thing.

anyfuckingway, you can shave your whole body bald……it ain’t the shape baby, it’s the integrity.

all hail the freak flag,

p.s. thanks to olga at the fabulist for sending this, via mr. neil gaiman. she was, indeed, the one who posted jason webley’s awesome video, which is why he met jason, which is why jason is staying at his house outside minneapolis tomorrow, and also why neil met me. and speaking of which you should GO TO JASON’S show in minneapolis…rumour has it that mr. gaiman will be in attendance.