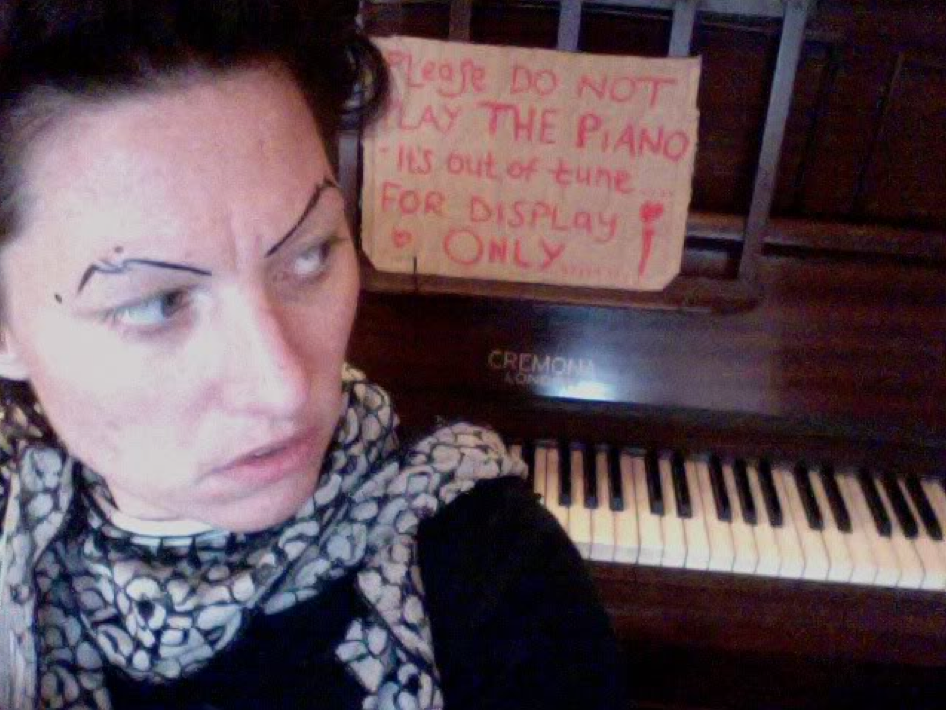 the art of audience courtship

the other night i wound up talking into the wee hours with neil and margaret cho, and wanted to share some important things i’ve learned.
before i do that, though, the weather. if you’re not from the west coast or europe, skip this news. it’ll just make you SAD.
also, i owe you guys a fringe list of shit that neil and i are going to (or have already seen)….it’s coming.

ONE: the european shows are selling great, and thank you all for tweeting and facebooking and telling telling telling people. it helps. please keep it up. i’ve added FANTASTIC FUCKING SUPPORT BANDS in every city, including jason webley in amsterdam, bitter ruin in the UK, and more….click up above on “live” as always and see the magic information.

TWO: we’re in edinburgh until the end of august (with the exception of the glasgow show) and i’ve been promising, on twitter, a blog with ALL THE SHOWS/PLAYS and stuff that neil & i are going to see (much of it with the splediferous maddy & holly gaiman accompanying us), and i swear to god i’ll do that next…probably tomorrow. hang tight.

THREE!!!: neil and i are going to do a WEST COAST tour TOGETHER in early november. i know, right? i would love to call it the “GET A ROOM” tour. but i don’t even think we’re calling it anything. we’re just getting in a car with some posters, t-shirts, a ukulele and a couple of iPods and makin’ like jack kerouac up the west coast….with more iPods and also not sleeping in trains and probably with way less drugs. whatever. we’re hip. we’re going to hit these cities…and venues will be announced/tickets will go on sale sometime in the next few weeks. stay CLOSELY TUNED, some cities will sell out VERY FUCKING FAST:

the 10th is Neil’s birthday and we’ll probably spent it hanging out in seattle, helping Jason Webley make papier mache coffee percolators or something equally absurd for his big seattle show on the 11th.

yes, friends. it is indeed 11/11/11 and according to our gospel, the rapture is going to come and suck up everyone who’s in the moore theater in seattle at 11:11 pm on that day and transport us to a Better Place where money doesn’t exist, all eggs are chocolate eggs, vegans can eat sausage without guilt, all people are in love and yet alone and happy, cigarettes don’t kill you and there’s an endless loop of Neutral Milk Hotel’s “In The Aeroplane Over the Sea” blasting over the cloud-speakers which you always hear as if you were hearing it for the first time. or it’ll just be a really good Jason Webley show. but given he’s been looking into (i kid you not) “renting ships,” i don’t think he’ll disappoint.

one of the first nights we got here we pulled a fringe marathon and wound up around midnight at a huge show called “best of the fest” where margaret cho was performing along with 4 or 5 other stand-up comedians. i’ve seen margaret a million times…i toured with her on cyndi lauper’s true colors tour, and i’ve seen her kill a house of thousands in boston.

her humor is not your standard stand-up humor. she has made an art out of oversharing the most personal of details, an art that i find more admirable and brave than extreme arctic rock climbing or … some shit. anyway…she’d ben put on the bill at this fringe multi-comedian night where famous/emerging stand-up comic acts play to a house of about 1,000 people.
margaret, like most of the comedians, had a 15 minute slot. all the other comedians were men.

she was great, but she bombed. how’s this possible?
well, she wasn’t great according to the people who were there. it wasn’t her crowd, and she wasn’t playing standard material. it didn’t work.
the crowd was an assortment of tourists and middle-aged festival goers out for a little laugh. they had no interest in hearing about maragret’s horror at the moment the became convinced that the guy never called her back was because she’d trimmed her asshole hair unevenly. they were like: this is not funny, we do not want to know this.

even *i* was uncomfortable and embarrassed to be sitting there, watching all these uncomfortable other people, as margaret fell into a deeper hole every minute.
a few nights ago i went to margaret’s actual show, where she ruled the space and the room, and people found the same story hilarious.

i was really dumbfounded….but i also got it. margaret’s show isn’t based anymore on reeling in strangers, it’s based on playing to her audience. she’s HILARIOUS, beyond funny, since she makes a sort of commjnity art out of stand-up. her audience KNOW her, they TRUST her, they’ve been following the plot. what she does behind the closed doors of her own venue is very fucking different from what is expected of you when you get in front of a crowd of strangers who don’t know you from a hole in the wall.

i’ve been confronted with the same sort of problems in the past.

what i do isn’t for everybody.

i was telling margaret about how i bombed at one of my first big solo shows, playing support for death cab for cutie at a giant stadium in boston.
i loved death cab. but their fanbase was really awful…for me, at least. i pounded out song after song of angst-y passion while people talked and texted and ignored me. playing louder or more passionately did not make a difference. these people gave no fuck. there was nothing i could do to win them over.  i did not have my new bag of tricks. people are a fickle bunch.

i’ve been in these painful situations especially when i go from a hardcore tour into a strange situation, like a benefit on an off night, and i forget that everybody in the room doesn’t know me.
the minute people aren’t on your side, in your story, following your plot, it calls for an entirely different kind of action. i’ve learned that the hard way, over the years. i’ve also learned how to play to an audience that will never, never listen to or like you and not take it too personally. which is, of course, impossible. especially when you’re used to being with Your People and talking a language they understand.

as margaret said : “i couldn’t even remember how to be that other person.”
i think it’s a lot like being married for years and then trying to go back to flirting as a single after years and years of marriage. you forget the rules of courtship.

but you’re married. you don’t need the rules anymore.

when i left the dresden dolls and went solo, i was so relieved to finally be able to talk to the audience (brian wasn’t so big on my endless banter) that i actually went off the deep end.
i had friends coming up to me, as if i had a crack habit, or a really bad drinking problem, saying “amanda…i don’t know if anyone has talked to you about this, but….do you know that you talked for 60% of your entire show? and you weren’t even funny?” i knew that. but i didn’t care. i was finally in control, so i was out of control. but it was the balm that i needed at the time. some people loved it. some didn’t. i didn’t care. i needed it, for me. and the people that i drew into me stayed with me. i wasn’t interested in having a bunch of mindless sex with strangers who wouldn’t remember my name the next day. i wanted people to commit. god knows i wasn’t getting that from a real relationship back then…i was on the road. the only person i had any consistant contact with was, occasionally, my soundguy, whose intimate relationship with me involved drunkenly stumbling and falling asleep on top of me one night when he forgot i was in the hotel bed on the left. (trivia: he didn’t get up either. he fell asleep on me and snored until i shouted at him. hi dave.)

the point was, and i started losing it, was this: you make a choice as an artist to try to please a sliding scale

there’s an inverse proportion that goes on. if you stick truly to what you care about and talk about what you want to talk about, your don’t have to care, or even be interested, but they’ll probably repsect your authenticity. the minute you start aiming to please your fans and going against your intuition, you start losing your footing. this isn’t to say you can’t write songs or make art that’s geared towards provoking a reaction in people…clearly you’re going to do that. but you have to follow your strong initial impulses, not listen to hard to what those around you are excited to hear. and the minute you attempt to please everybody, you are truly screwed. the moment you attempt to please everybody is the moment you please nobody…including yourself.

it’s very similar to the basic rules of courtship….most people aren’t attracted to people racing to the middle, people (unless they’re highly insecure and deluded) aren’t usually attracted to people who make a point of telling them what they want to hear.

just today, i twittered gleefully about finishing a new ukulele song (which i did. i’m very happy to be finished. i’ve been trying to write/finish this one for 5 months now. how hard can it be? whevs.)
i was also especially happy that i managed to incorporate a slew of words that floated in through twitter late one night when i was up in utrecht, working on the lyrics, and got stuck. i asked for suggestions, and hundreds of people sent them in….leading me to actually add a section to the song that wasn’t there before, and it sounds awesome.

then somebody twittered: “Twitter-dictated lyrics and yet another uke song? Didn’t you want to quit the novelty songs and start making music again? :(“

this song is music. every song i write is music.

whatever i’m making, i’m making. i’m very committed to doing what i feel like doing.

to me, that’s the true art. not the music. not the songs, silly or serious. not the product. but the art of doing what you’re drawn to do, regardless of who gives no fuck.

back and forth forever. 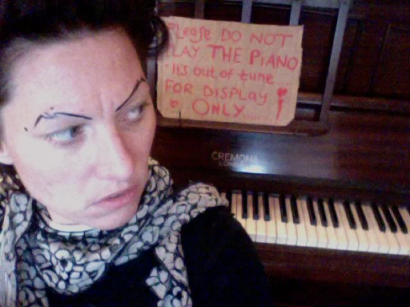