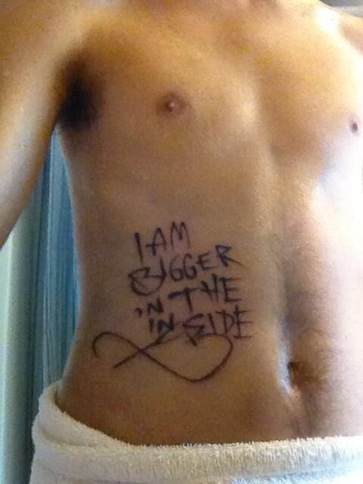 Cross-posted from my tumblr. 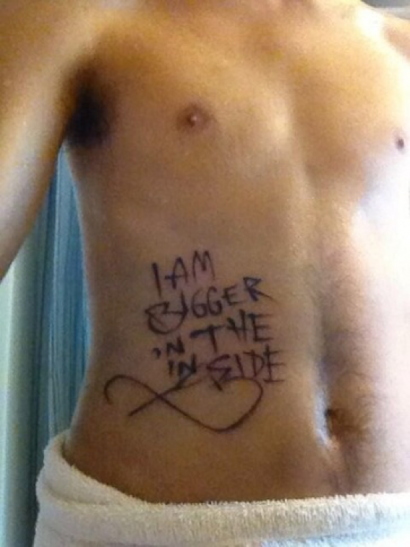 tattoos come into my life a lot, but this one broke my heart open.

neil and i both see a lot of tattoos of our words and works on people’s skin, and we have lots of weird tattoo anecdotes. last night I signed the inside of a girls thigh at the littlefield show and recommended that she walk home bowlegged because seriously that shit will sweat right the fuck off on a hot New York night. neil proudly tells the tale of the time someone got his signature on their arm in a signing line and then returned to the same signing line three hours later with saran wrap covering the freshly inked proof.

some people get my face tattooed on them. that always feels surreally challenging, to look at my own visage staring back at me from somebody else’s arm or back, like knowing I have sister-spy-selves all over the world, hiding under hoodies in the deep winter.

if you hadn’t noticed, i’ve been battling a kind of depression for the last few months. circumstances make it pretty understandable, i’m facing some crushing personal and business problems and feeling lonely and at loose ends in pretty much every department. the last time i was this low i was in college – unable to get out of bed and skipping classes. it wasn’t until i escaped the setting that things turned around. maybe tour will help. it never does.

anyway, i’m not so fucking depressed that i couldn’t write a song, which was the saving grace of last week, and having the house party in nashville actually directly kicked my ass to finish what i’d started, which was a massive blessing because i have a bad habit of finishing songs 59% and then leaving them for years unless i have an active instant-gratification motivator (usually a show, and even better if it’s a show for 50 people in a house, where i feel safe to fuck it up).

so as i was writing and wandering from the verse into the first chorus, the words “i am bigger on the inside” spilled out and i thought…i can’t fucking use this. can i?

it had ricocheted from doctor who into my incredibly dark mood, and i felt conflicted…on the one side my little sobbing song and on the other side, hoards of people in tardis t-shirts. fuck it. yes.

and i used the lyric.

i played it, two hours after finishing it, for a teeny room of 15 people at the nashville house party and cried through most of the second and third verse.

a few days later i flew to milwaukee to play for pride festival. i was having a rough night. the darkness was getting the better of me. against all better judgment (it was an outdoor festival celebration of YAY) i stuck the song towards the end of my set – a quiet, 8-minute introspective and repetitive ukulele song that I couldn’t play through without my throat getting stuck because it was just too fucking sad.

the crowd had never heard the song, because it didn’t exist anywhere. i cried through verse two and three again and it was fine except that i went straight into “ukulele anthem” afterwards and had a giant shiny glean of weeping-snot on my upper lip for the whole song. whatever. yes.

after the show i signed for a few hundred people. a boy asked me to write the chorus lyrics on his chest. the next day, he sent me this picture. he’d had them tattooed.

beat that, neil gaiman, i said, as i showed him the tweet, collapsing into a pile of useless blubbering on the floor of my mind.

but actually…there is no competition.

and this is what i see and understand about him, about me, about you, about doctor who, about coincidence, about the millions of ingredients and chances that lead us to this moment right here where we are facing each other (maybe through a screen, maybe not).

we are all connected – there is no way out, nor should there be.

p.s. the body & the tattoo belong to gavin michael batker, @shizaminnelli on twitter.

p.p.s. i hope to record the song soon. stay with me.

new BOOK question! and this one’s deep and long. (insert your mom joke).