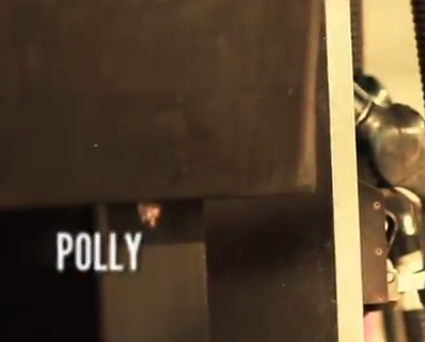 You may remember SPIN Magazine’s celebration of and tribute to Nirvana’s “Nevermind” on the 20th anniversary of the record’s release, last fall. You hopefully also recall that Amanda recorded a spine-tingling cover of “Polly” for it alongside her new band, The Grand Theft Orchestra (Michael McQuilken and co-conspirator, Chad Raines).
Shot in Connecticut in November 2011, the video – directed by GTO-member McQuilken and featuring actors Christopher M. McFarland and Jillian Taylor with a special guest appearance by Blake Brasher – is available exclusively on Amanda’s YouTube.The single, a newly mixed and remastered version engineered by Raines and produced by Michael, is available on Amanda’s Bandcamp for 50¢ + donation (just enough to cover licensing and transaction fees) as well as iTunes, AmazonMP3, and other digital-music-retailers.
For additional information on the song, making-of the music video, and pictures documenting the film-shoot, read Amanda’s new blog – “new video for ‘polly’ (nirvana cover)…with some explaining.” – at amandapalmer.net

About the song, (via Amanda’s blog, and various sources Wikipedia):
“Bass player Krist Novoselic remembers Kurt Cobain writing “Polly” after reading a newspaper article about the abduction, torture, and rape of a 14-year-old girl who had just finished attending a rock show in Tacoma, Washington. In June 1987 Gerald Arthur Friend picked up a 14-year-old female friend after leaving a concert at the Tacoma Dome. Upon trying to exit the car the girl was handcuffed and held hostage at knife point. The girl was taken to a mobile home where she was tortured and raped with various objects for two days. She was also threatened with a blowtorch.”

THE GRAND THEFT ORCHESTRA HAS LEFT THE BUILDING.