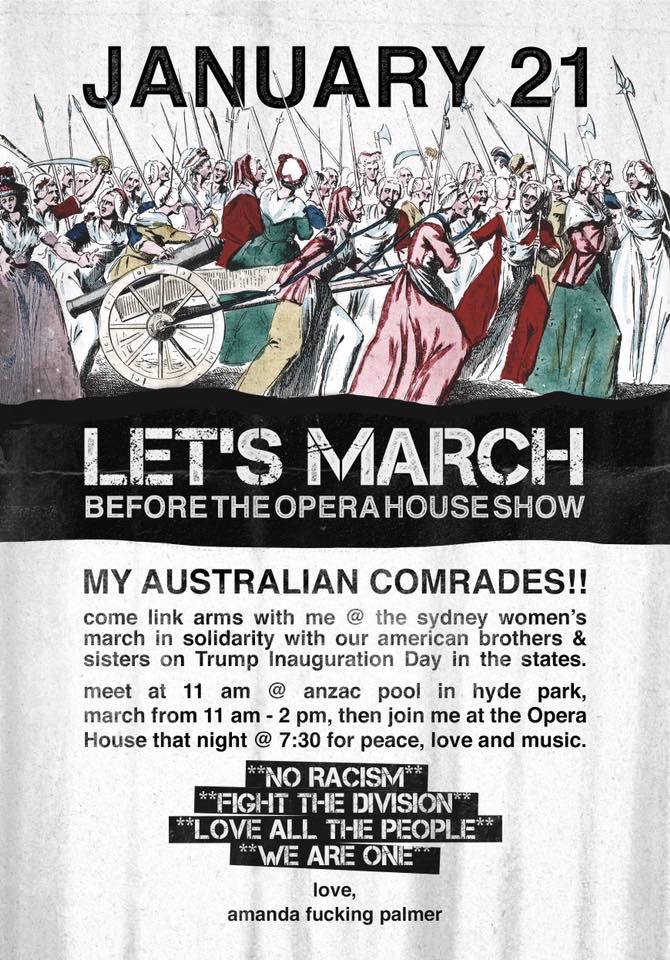 greetings from the Work Cave (not to be confused with the Nick Cave, who i am fucking thrilled to be going to see this friday night in sydney – anyone gonna be there?) where i am, without trying to confuse you, trying to pull a Nick Cave and strap my ass to a chair every day in order to write and rehearse. i figure if it works for nick it’ll work for me. it’s hard. i’m not used to “clocking into creative work on a schedule. but i’m getting used to it and occasionally i allow myself to do EXTEREMLY IMPORTANT OTHER THINGS like come out to the courtyard and make myself a coffee and post to the patreon because IT IS IMPORTANT.

HELLO. (now tell me to go back to work.)

but also: there really is an important thing…if you’re in sydney (and i know a handful of you ARE IN SYDNEY, because i’ve managed to sell a few thousand tickets to the opera house and they can’t all be non-patrons), COME MEET ME THE MORNING OF THE OPERA HOUSE SHOW FOR THE WOMEN’S MARCH.

i’ve been feeling lousy since the election, most of us have, and even lousier that i left the states shortly thereafter. if i were in the states right now i’d be mobilising and organizing something to do at the Million Women March on Washington: luckily, there’s a march going on in sydney. so there. 11 am, with child and ukulele in hand.

my friends of all genders: globally, globally, globally i think it’s so important that we gather a raise our voices about what is fucking important to us. i don’t know if you’ve been following what’s happening with the possible so-called defunding of Planned Parenthood (it’s bad )…or the repealing of obamacare (also bad…it’s been heartbreaking but important to see the tweets like THIS  from my musician friends like zoe keating whose livelihoods may have been destroyed were it not for the recent progresses in free health care).

i was on the phone with my older sister the other night, who has never protested anything in her life and is going to join the march in amsterdam, near where she lives. she told me that it feels like such a small, insignificant act, but it feels like the only thing she can do.

but every movement causes a ripple, and you never know where those ripples lead. just the act of marching and raising our voices in solidarity is a very, very powerful act. march if you can, wherever you are, and bring people, and spread the word. all ages, all genders, all people – this is a historical moment. the march in washington is predicted to be THE LARGEST IN HISTORY .

all the wash DC info is here, and there’s a list of sister marches as well:

IF YOU ARE COMING TO THE SYDNEY MARCH, make sure you’re following me on either twitter or FB so i can send you up to date info on where i am, but it should be pretty easy to find each other. (let’s hope).

HERE IS THE FACEBOOK EVENT for the GENERAL SYDNEY EVENT …check in!

and i JUST CREATED A FACEBOOK EVENT for us /patrons/fans/anybody who wants to find other AFP-people.  check in there too so i know who’s coming and who to look for. i’ll most likely be there with neil and a few other friends. (and a baby).

i’ll see you there.

OH AND opera house tickets are nearing sold out which is great. if you’re still needing them, they’re here: http://amandapalmer.net/shows/

1. see All the Things i’ve made so far on patreon: http://amandapalmer.net/patreon-things/

3. AFP-patreon-related questions? ask away, someone will answer:

being nick cave (or: the holy prophecy of the grinderman)