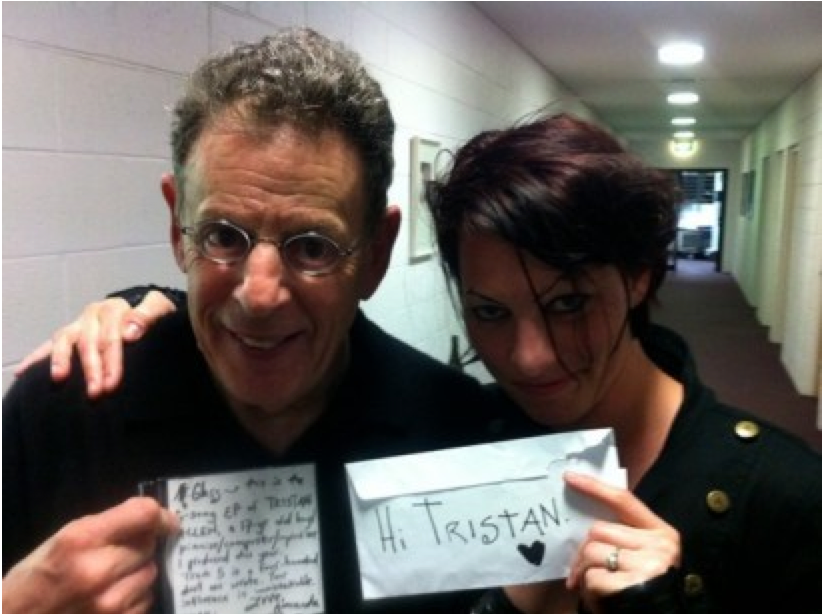 being nick cave (or: the holy prophecy of the grinderman)

January 20, 2011
life is going faster than the speed of life. the wedding blog is turning into a novel, more or less. i’ll post it soon.
i finally recovered from being ill with LURGY in melbourne just in time to come meet neil in tasmania for the MONA FOMA festival in hobart…and then neil and i just took 3 days completely offline to honeymoon in the tasmanian forest (not a euphemism). it was incredible. i recommend a visit to tasmania for every couple (not a euphemism and also a euphemism, take your pick).
things down here in australia are, as they often are, absolutely magical and mindblowing. this place continues to be awesome on a scale i cannot measure.
yesterday we went to the MONA museum and got a sneaky tour since they don’t open til this weekend. all i can say is i’ve never seen anything like it: it’s a fucked-up raw nonsense art-dream palace on a grand scale that you should (if you’re in oz) make TIME to visit – seriously. it’s worth it.
the record officially comes out tomorrow (the 21st in oz which will be the 20th many other places in the world). i’m aching to share it with you. maybe you should follow @AFPwire. and maybe you’ll be happy you did in a few hours.
i think it’s good. last night i got to listen to it in a really weird way, and i’ll tell you about it….
since getting to tasmania, i’ve gotten to hang out with three of my idols, two of whom i’d been lucky ebough to meet before: brian ritchie (who runs this festival), philip glass (who played a few nights ago), and nick cave.
brian’s been hosting this festival and turning up at every event that neil and i have…and we go back to when the dresden dolls opened for the violent femmes. we liked each other a lot back then, he’s been a ally ever since. here we are the other night, before philip glass, looking fancy: 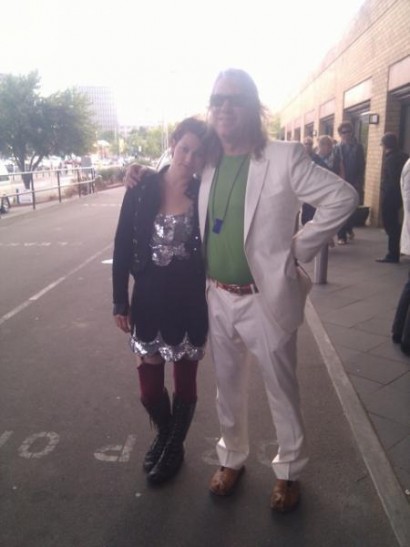 philip glass i actually met when i was a timid 19 year-old experimental music student at wesleyan and my teacher, alvin lucier, took me to a show in new york where he introduced me. it was my first celebrity meeting and i was star-struck. when i told him i was a songwriter and pianist, he jotted down his address and told me to mail him a CD, since he’d just started his own record label. this time around, i got to gift him with tristan’s CD, where i knew he’d hear his influence raging within the notes (and which – the poetry wasn’t lost on me – came out on my own label…i felt like a proud, proud, mum).
sitting in the concert hall listening to philip glass pour his hands onto a concert grand was like a drug trip – the music unlocks your brain. i sat there next to neil feeling my entire life unpuzzle and puzzle back together – it was transporting. neil and i came to the conclusion that it was the perfect honeymoon concert. here’s me giving philip tristan’s CD…. 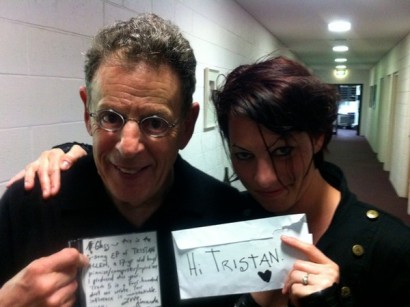 weird bragging right: we were also introduced to the governor and premier of tasmania. i also ran into the premier last night at dinner.
i think it’s very possible that you can gauge the awesomeness of a country by the amount of great music the government listens to.
australia is winning.
side note: drunken ping pong in the festival venue afterhours is sublime, as eric (my tour manager) and mikelangelo are demonstrating here: 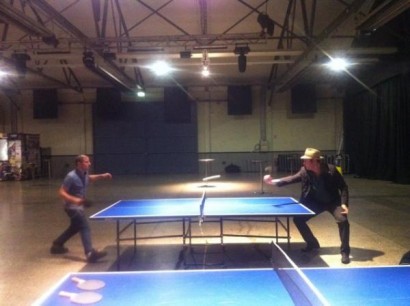 my actual set was sublime…i only spent a half a day rehearsing with mikelangelo and the black sea gentlemen (who are also going to be my support and back-up band in sydney), but we threw together a decent party. here’s a picture: 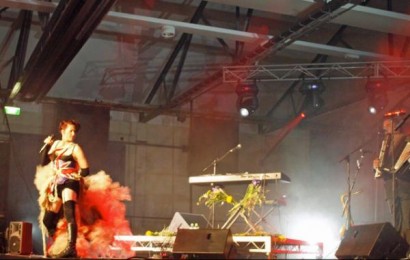 (that’s guy on accordion on the waaay right – more amazing photos likely to come from sydney – this one was taken from THIS review http://www.abc.net.au/local/photos/2011/01/16/3113947.htm)
and last night…i got to see and meet the Great Nick Cave.
you must understand: philip glass was a mentor, but nick was huge for me. beyond huge.
for me, meeting nick was like meeting one of the fucking beatles.
i’ve worshipped the man’s songwriting and craft since i was 15 or 16, when i first heard “tender prey”, and i’ve been a devoted follower of his ever since.
he absolutely enraptured the audience last night. i danced in the pit and got sweaty and worshipped in the church of Grinderman, his new band.
i’d seen nick solo before, but i hadn’t seen this current configuration, and while i missed listening to the classic bad seeds tunes, the vibe was fucking electric – the church was on fire. the band chemistry is dresden dolls-like – it’s a fucking dirty rock and roll preacher-led cock-fueled jam band of the highest order. warren ellis was on guitar and violin. i used to worship in a separate church – he fronted The Dirty Three wielding only a smoking violin and enough passionate rock energy to kill an entire village with the wave of his bow. jim sclavunos was on drums; brian and i played with him back when he was a Bad Seed and also had a side project in new york called the Vanity Set. martin on bass. they were FIERCE.
here’s nick, from the crowd: 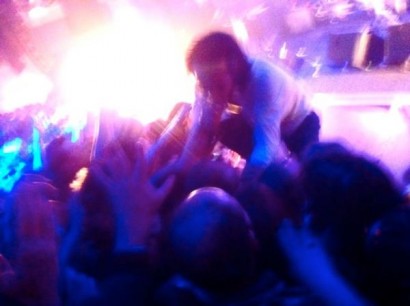 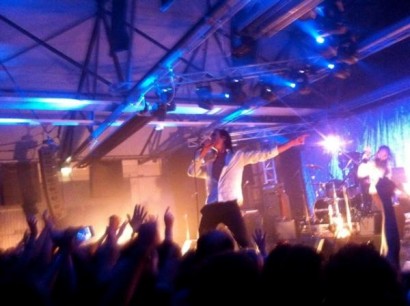 An Open Letter to Nick Vargelis