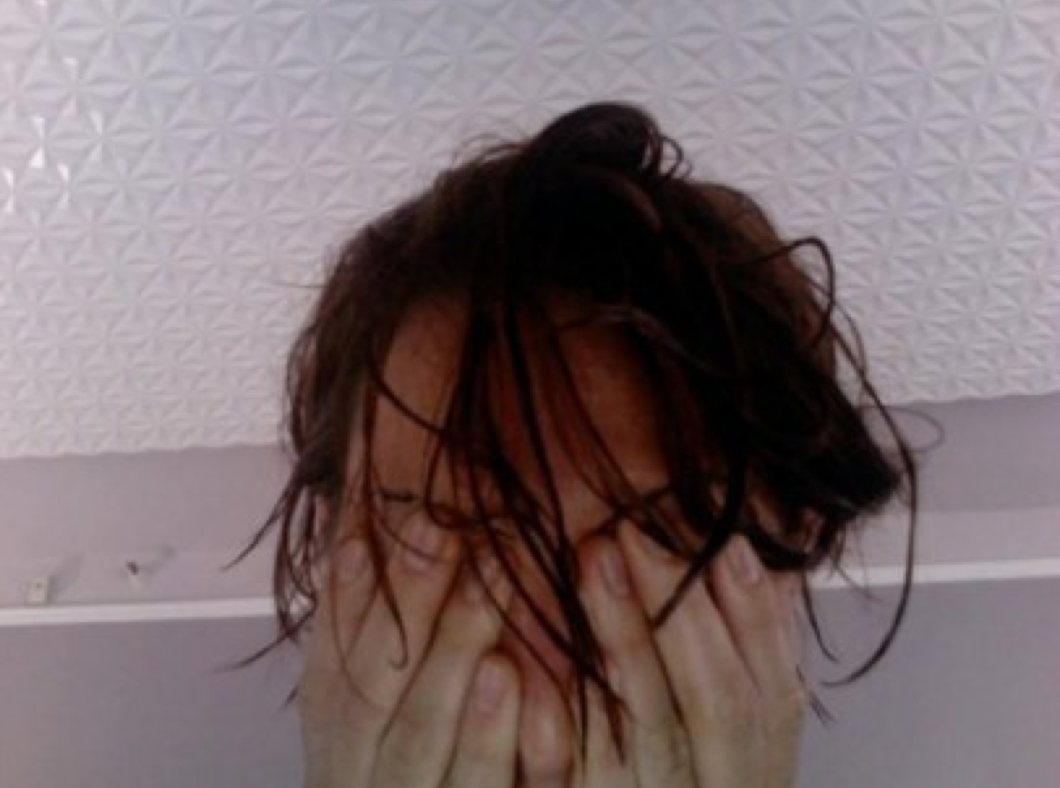 well, my blog-a-day experiment has HALF WOKRED. i’ve been aiming to blog every day and wind up blogging about every 36 hours.
still.

i’m so used to the back-log that i know realize: TOO MUCH COOL SHIT IS HAPPENING EVERY DAY.
you know what i want? a personal blog-fairy. to follow me around, save links, take notes, and poke into my brain with a small blog-word-magnet, retrieve the relevant profound information from my mind and make it all nice and shiny for mass consumption. while i drink, sing, eat ice cream and read the comments.

but actually. in a way i’ve got the closest thing one can have to a blog fairy….his name is sean. sorry, sean. i mean fairy in the best way.

so that you guys all know (and you may often be wondering why there’s a slight lag in my blog posting form the time i write them to the time i get them up), i email my blogs over to sean (many of you know him as @indecisean or indecisean on theshadowbox.net). he then makes sure everything is cross-posted and up on myspace (both of ‘em), my site, the forum, LJ, facebook, and he also makes sure all the links are working and even catches me getting dates wrong and occasionally saying stupid things when too tired or too wined-up. i never thank him publicly, but he saves me shitloads of time. thanks, sean. i love you and you’re amazing.

now back to business.

for starters, i got my period. yay. dammit.

but not before i got a few dozen responses on twitter and as many blog comments that other women were having late periods.

i blame this mass-period-lateness on the anniversary of the moon landing. it’s fucking up our plumbing.
plus all the moon-walking due to the recent departure of michael jackson. that’s not helping.

my good friend whitney (who’s a massage therapist) came over and did her magic work on the entire circus (me, maddy, claire and mr. neil). she also brought her fantastic boyfriend nathan, who does acupuncture and had brought his needles. i told him about my, um, downstairs mix-up and he went to work. about 10 minutes later (while shopping in forever 21 with the girls – good god), i was all set and scrambling for tampons (saved by the girl-teens – no better way to bond). i’ve never had such an instant, clear sign that acupuncture really, really worked on the spot. i’ve gotten treatments for years but this one just blew my mind.

so for anyone doubtful out there, feel the love. neil got some needles too and was very brave (he’d never had acupuncture before). he loved it. i also (shockingly) introduced him to the concept of the hot tub. he’d never been in one. wait, what? the man, like anybody traveling at the speed of light, definitely needs palliatives. shit he’s fast. one thing i realize that’s happened to knock me off balance is that i’ve gotten caught up in the Speed of Neil. the Speed of Amanda is mind-bending enough. the two of us together is slightly disastrous, colliding tornados. we also manage to lose things four times as fast when we’re around each other. he took the girls onward to san diego this morning so that i could visit twitter and they could get a beach day. the silence. i really love him. i also really love being alone. this is, of course, ok.

before i forget:
if any of you are in the bay area and ever, ever, ever need a massage or need to give a massage gift to a stressed friend: WHITNEY MOSES. burn the name into your brain.i’ve been getting treatments from her for years and she’s simply THE BOMB. she works deep, she really listens, she’s just a dream massage therapist.

and here’s a picture of her pretty face: 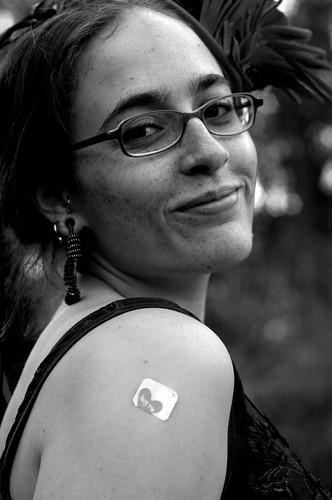 tell her i sent you. and many of you may even remember/recognize her from WAAAY back in the day when sold merch for the dresden dolls (tour 2003!!!!) and would occasionally take the mic and sing “delilah” with us.

flickr found me this old shot of her with us (don’t worry. she doesn’t wear that when she’s working. unless maybe you asked, and even then, i doubt she’d do it. she’s a professional. no happy ending shit, probably no kinky outfits).

i have no idea where this was taken: 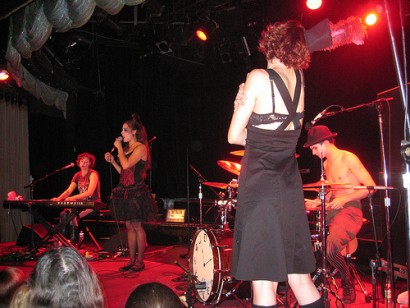 my trip to twitter was a trip. 60 employees as opposed to the 10,000 at google.but wonderful, filled with real, smart people.

i chatted with a bunch of them and showed them the rough cut of danna’s ninja-beach video (it’s almost up!)they loved it.

i did a quickie interview with del (named after….a neil gaiman character from sandman, delirium. life is weird, and she was awesome).
she works in spam&abuse (what an awesome department) and i asked her a bunch of geeky questions while danna filmed and we tested the quality of the coffee in the twitter kitchen. google may have disco balls, but twitter had FRENCH PRESS COFFEE. word.
we’ll throw that clip on youtube pronto. 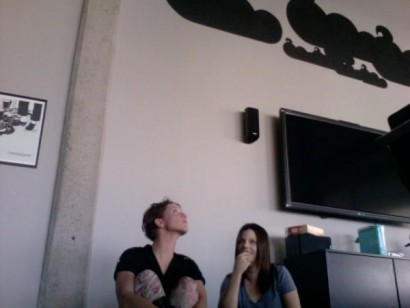 we moseyed around the office and one dude had a GIANT camera with like a 6-inch diameter lense on it. my inner photo-slut came out and we did an impromptu shoot on the twitter employee bike rack:

his name is justin diaz (the photo was taken with my mac by danna kinsky)…. 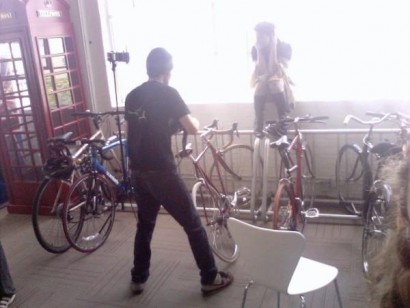 and here’s the result (one, at least): 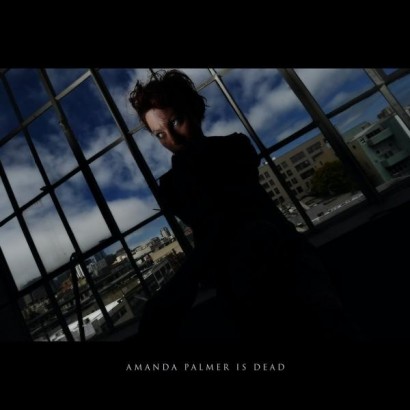 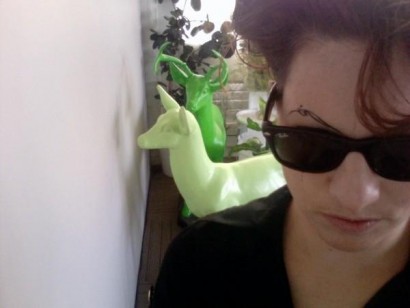 all of the art, by the way, that you associate with twitter (the clouds, the bird, the fail whale, etc), is all painted by @sara (http://saramorishige.com/), the wife of twitter CEO @ev (evan williams).
somehow knowing that made me very, very, very happy. she also designed the deer, and painted the office walls, which have wonderful spots of minimal solid-color birds and garden growth. it’s really a beautiful place. 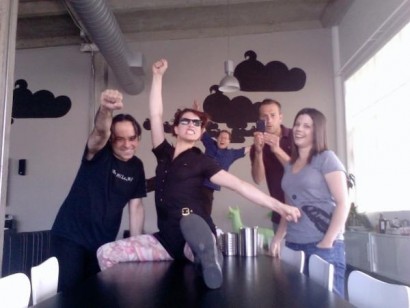 i came back to the hotel with danna and we shot a quickie video for “lua” by bright eyes. i got out of the shower, got into bed, and played it on ukulele.who knows. we’ll take a look at it soon. if you ned a cinematographer or ninja camera person in LA/SF: danna’s your girl: http://www.dannakinsky.com/

speaking of which, i did a loooooong-ass email-interview with HYPEBOT.COM, and they’ve been releasing a section a day.
1 & 2 are up, 3 goes up soon.
i’m including the very beginning of it, go over there to read the rest. it deals with everything from new technology to fan mail and how i deal with it to privacy and the new millenium….it’s a good read. i really spent time on this one because i also knew the journalist was going to use it in a book she’s publishing. i got my Smart Hat on and tried to use full sentences and spell-check.
please read and enjoy….

hypebot:
How do you think the blurring between home and studio, the public artist and private individual, and the ability to work from ‘anywhere,’ at all times, correlates with the dynamics of what could be a ‘new middle class of musicians?’ 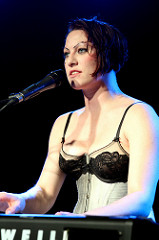 Amanda Palmer: Well, for better or worse, the blur has both democratized and frustrated the music business and music-making. It used to be impossible to do any of these back-end production and promotion things (mass-mail fans, create videos, create recorded music) without huge resources from labels, agencies and otherwise profoundly business & profit-oriented organizations. Now that the musician herself can act as all these things, it’s empowering. But also difficult – it begs the question of what artists should really be doing with their time.

Now there has to be a drastic re-interpreting of an artist’s lifestyle…and I think it’s hard to make boundaries and limits since everything is so tempting now. I find myself strangled by the idea that I can promote my music indirectly at ALL TIMES (by twittering from my phone, for instance).

There’s no saying where my creative mind would be going otherwise. It’s a huge catch-22. I think the important thing is that artists and musicians will just really have to re-imagine themselves as responsible self-promoters who can wear that hat, powerfully, and then have the presence of mind to throw that hat out the window when it’s time to make art in isolation, or however you do it. Though the line stays fuzzy…I’ve been having a blast lately, blurring that boundary itself and creating these weird impromptu performance pieces ON twitter itself, things that have no outside purpose but that connect me more deeply with my audience. Who’s to say? It’s the Wild West out there and it’s wonderful.

But I hear and feel the same theme resonating all over the art world right now, and especially in rock: if you’re in this to be famous and huge, forget it. You have to WANT to make art and connect for a LIVING WAGE. If you’re making music because you think that eventually the limo filled with strippers and coke will roll up, you’re living in the wrong decade….

checking out, off to vegas for a half a day to do 5 things with neil, then to san diego with the circus. 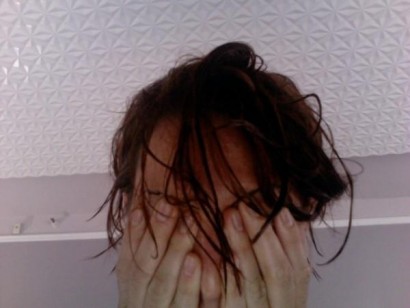 NEIL & AMANDA TAKE QUESTIONS FROM TWITTER about “AN EVENING WITH”