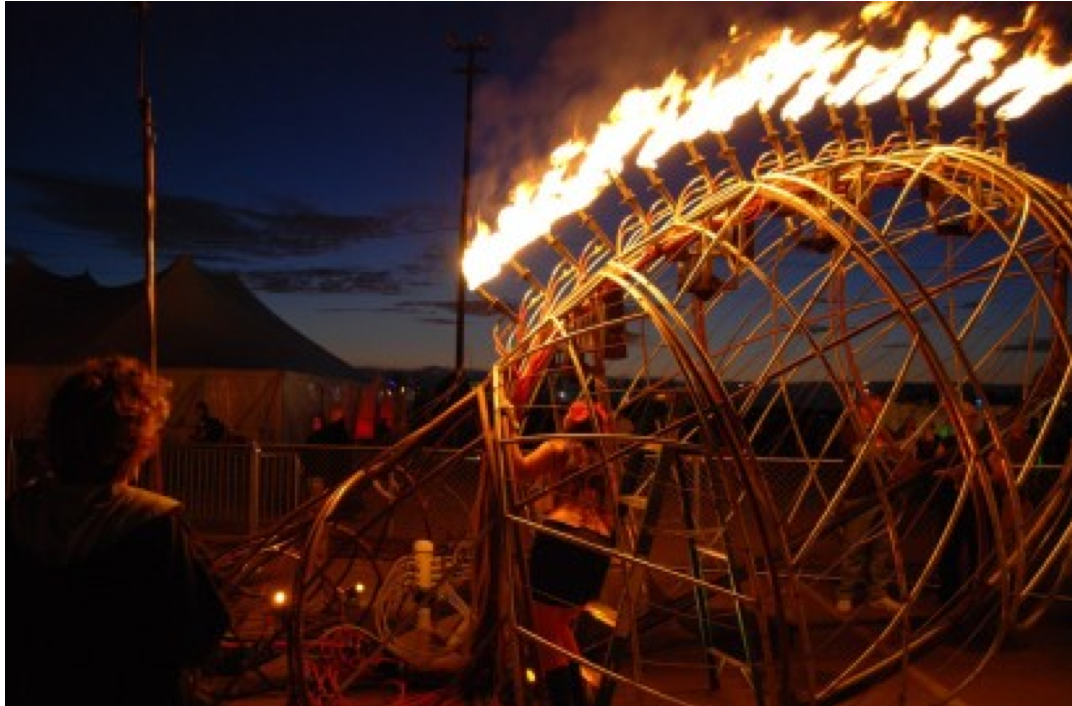 pictures of matchstick men & me

yesterday went by fast, my innerside is starting to fry a little bit & i can feel the crush.i’m not practicing, i’m floated right of center and i need a reboot. my period is two weeks late.
please don’t send baby names. my best friend texted me one as a joke yesterday and i didn’t find it at all funny. which is possibly a good sign, because when i’m PMSing i stop finding shit like that funny.

but i’m not pregnant. i know, i peed on a stick. something is just up. brain not working right. body following.

last night, after i soundchecked, we ate dinner with micahel chabon (another author friend of neil’s) and his incredible wife ayelet and their four cooler-than-possible kids sophie, zeke, ida-rose and abe.

my favorite shot of the evening, abe and rosie chabon, the junior dolls: 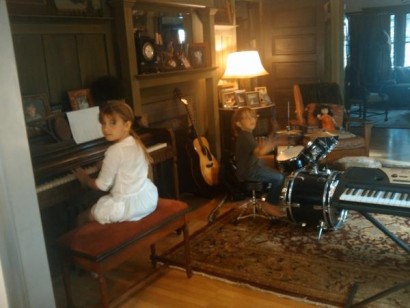 rosie refers to everything she thinks is cool as “MASSIVE ROCK!!!!”

look at their LIVING ROOM. their living room includes a piano, a drum set, guitars, a keyboard and a collection of basses.

i’ve never been in a family-like house that felt so much like Love. i just wanted to hide in their shoe closet and never leave.

we all headed off to the fire festival, which was magical weird and though perfect in it’s own right i wished i’d been more There.i wasn’t able to truly stop and enjoy, which always makes me feel detached.

the noise, the one-off-ness and my strange off-tour life made the set hard and things got blurry.it’s harder than i ever think it’s going to be moving from one environment to the other. one moment at a family dinner, the next backstage with a crowd of half-naked dancers.though it sounds amazing, and it is, my head stops working with the flux sometimes.

the wine didn’t help, and even though i didn’t drink all that much, it hit me hard and undid whatever threads i was hanging from.the land itself on fire, it was inexplicable. i think i’ll have to dig for pictures: 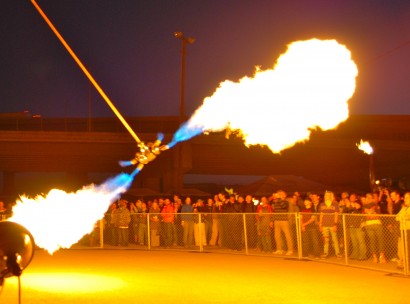 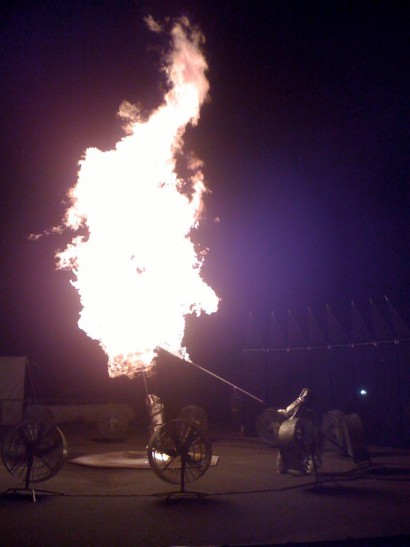 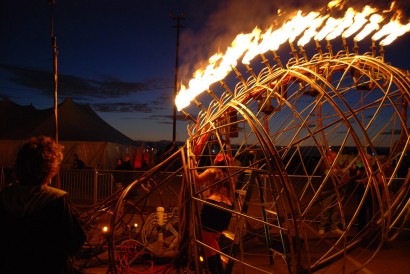 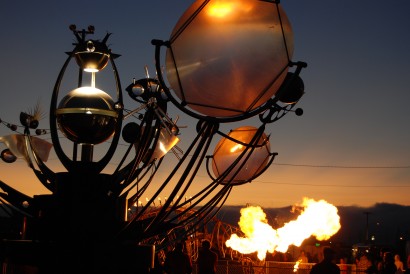 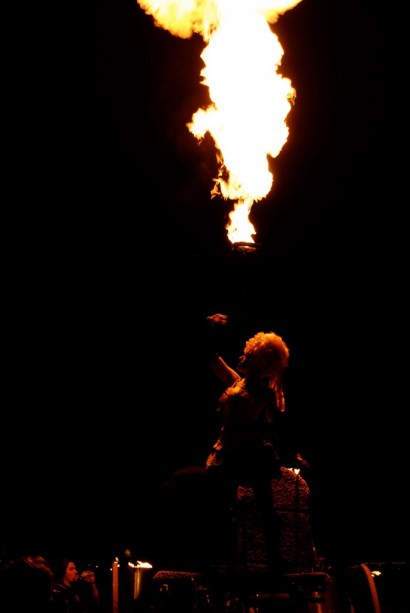 http://www.flickr.com/photos/willworkforcheese/3735904792/
it was a magical post-apocalyptic landscape beneath a highway. tons of interaction, tons of beauty, just strange and wonderful.

i think…no, i know….i’m being much too cavalier about being able to be on what amounts to a vacation and just drop in on a gig like this.i was sloppy as hell and never found it quite right.there were beautiful beautiful moments.the dancers from damage control were superb and i will put up footage as soon as it surfaces….and the whole thing felt ultimately Good.

neil and i signed books.

all in all – i still can’t believe this is my life sometimes. 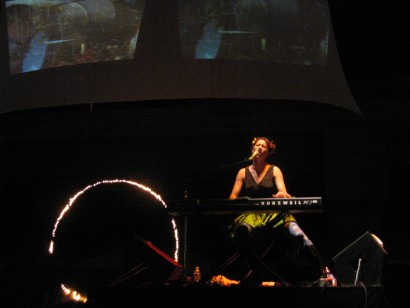 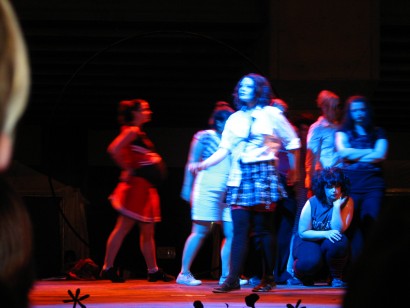 i closed with “i will follow you into the dark”, which redeemed my soul.

tons of you seem jazzed by the book club idea. we’ll do it.i think what i’m going to do is just throw out the current book i’m reading/pondering and start a discussion forum for it.

meanwhile…
i don’t plug magazines very much, because i almost never read a magazine cover to
cover and feel strongly about it (there’s the occasional new yorker article, but i’m
talking about the GESAMKKUNSTWERK of the magazine).
but the latest issue (it might even be outdates by now) of interview magazine is worth finding. i’ve been reading it on and off planes for the last month and it’s filled with goodness. and also makes me very happy that i don’t have to contend with the Art World in new york. but i have to deal with the music industry pricks. we all have our cross to bear.

if you don’t know about interview, it was founded by mr andy warhol in 1969.
the format of the magazine is that artists&folks interview each OTHER. more like conversations than actual interviews. the layout is great, very simple and elegant, and the idea is genius. sometimes it’s much to schmancy for my taste and the ads make me gag. 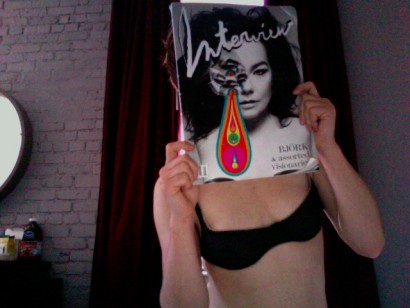 choice quote:
page 68, john currin interviewed by glenn o’brienn:
“art is evolutionary, in that it responds to the times but it doesn’t improve”.

p.s. i love this video, a simple commentary on michael jackson and the media hall of mirrors we’re all trapped in.there should be a few more pauses to let the info sink in, but the points are all right fucking on. it’s nice to head someone articulate it.