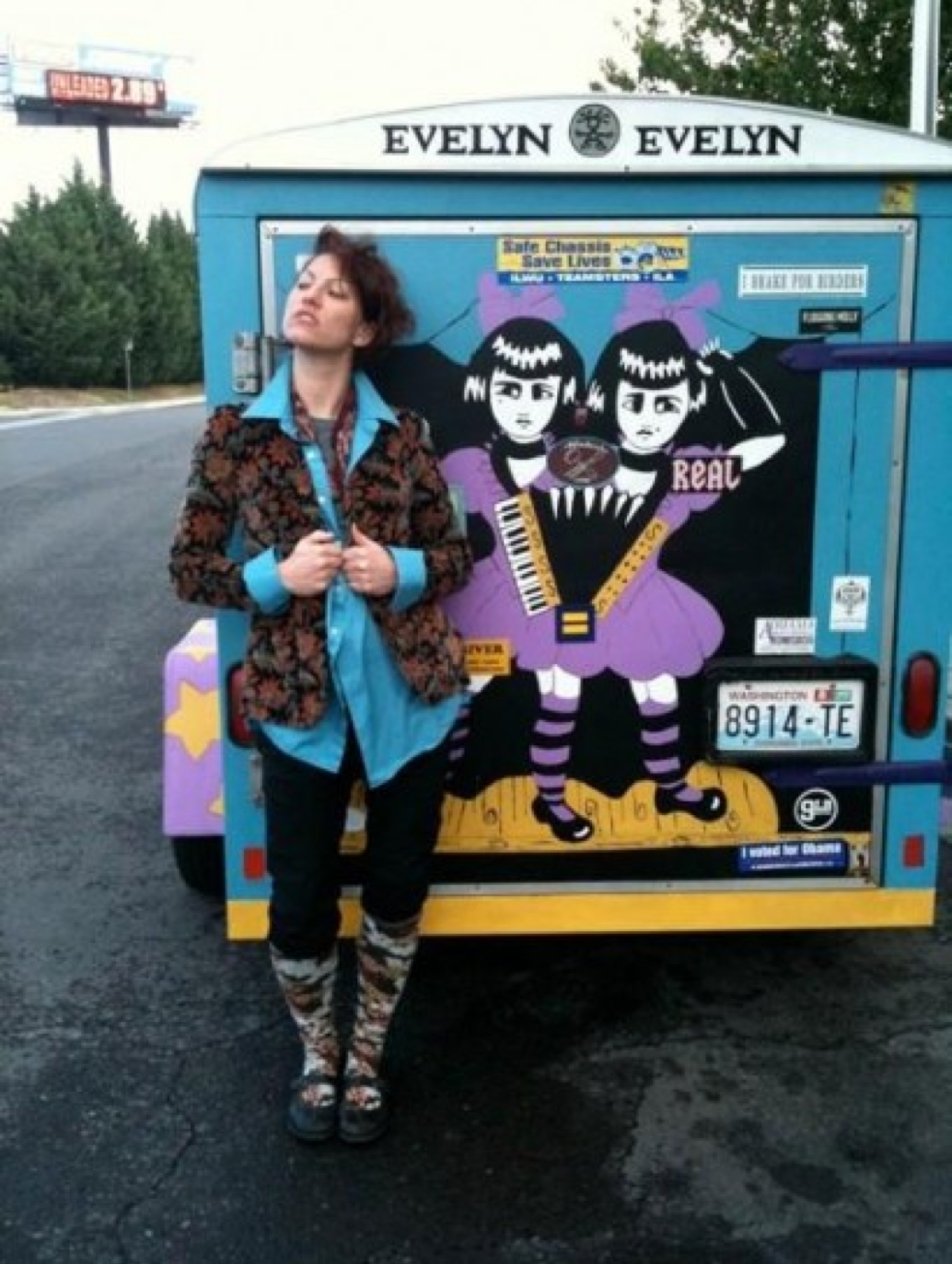 WE ARE THE ROAD CREW.
ladies and gentlemen…. 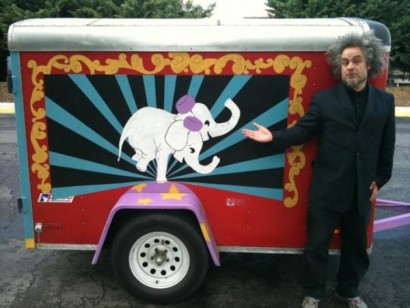 sxip makes songs out of objects and gets everybody shouting every night. he’s really fucking awesome.
i met sxip about 5 years ago in boston. i was at a show at (i think) the paradise, to see a band called HUMANWINE (who brian later drummed with), and he was the opening act.
he wound up with his girlfriend at an after-party at my house, and the rest is history. a lot of you have seen him open up for me and the dolls before, as we’ve done a shit-ton
of tours together. my favorite thing about sxip is how he sends random emails to me every few months expressing his boundless joy about making art and music.
and how he fucking understands showmanship….he’s carny, and carny knows the difference between entertainment and bullshit.
his new CD, “SONIC NEW YORK”was released JUST IN TIME for this tour and is seriously beautiful, so BUY IT AT THE MERCH TABLE from zea (it’s up now at CDbaby and will be available digitally on his bandcamp and itunes on the 24th). 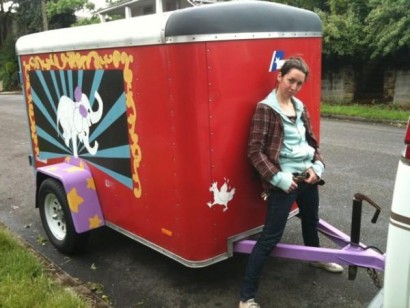 i met zea about 8 years ago in boston when she started dating my friend stephen. she was looking for a place to live & we were looking for another comrade for the cloud club, so she moved in.
we did lots and lots of stuff together and she was the resident art-maker-of-things for ages….she did the costume & art direction for the dresden dolls’ “girl anachronism” and “coin-operated boy” videos, and also painted this incredible painting of me & brain which got used for the front cover of the lyrics booklet in our first CD: 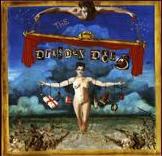 she is a brilliant don’t-take-any-shit country girl, is ms. zea, and in the cloud club she always put us to shame with her knowledge of how to deal with rats and other vermin.

so you know, doing merch is a HARD fucking job. she’s the first person into the building and the last person out, and she doesn’t get a break to eat with the rest of us because she has to hustle at the front of the venue to get all the merchandise in order and displayed. day in and day out, she’s putting together and taking apart displays of shirts, vinyl records, kazoos, CDs, totebags, and a million other things for you crazy people to spend your hard-earned money on.
please: when you buy your merchandise, make sure to tip her, tell her that you LOVE HER, and take pity on the fact that it’s very possible she’s been standing there for 6 hours.

also, she likes vintage boy scout merit badges and 1st place agricultural prize ribbons, so if you have some you don’t need, she’ll take them. deliver to the merch table when she’s not looking too busy, pleez.

(by the way…all of you who are bringing candy and cupcakes and chocolate to the merch booth and to us after the show, WE LOVE YOU, BUT you are making us fat and cranky and we have no self-control. like, zero. i trust you to find some less white-sugary and healthier alternatives, you’re a mighty creative bunch.)

3. this is eric sussman: 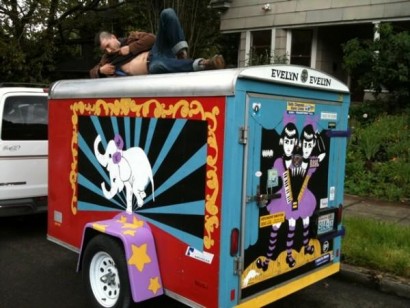 STATS
twitter: @southships
website: southships.com
height: 5’7” and three quarters
grew up in: Houlton, Maine
lives in: Portland, Oregon
real-life situation: this blackberry, this van, this mac, this settlement sheet, this venue, this guestlist….
tour role: tour manager, stageboy, problem-solver, fireman
special ninja skill: can open 20 beer bottles in 10 seconds or less
currently reading: “Girls Like Us: Carole King, Joni Mitchell, Carly Simon—And the Journey of a Generation” by Sheila Weller
favorite Nick Cave album: “Henry’s Dream”
life motto:
– “because i can, ‘cause no one can stop me…’cause i’m addicted to bad ideas, and all the beauty in this world…”

eric was a dolls fan, aaaages ago. he was going to brandeis university around 2003, and was coming to a ton of dolls shows.
we always recognized him because he would come to local boston shows with crazy-bad-ass adam ant warpaint on his face.
somehow i gave him my phone number on the back of a napkin and asked him if he wanted to live in our rehearsal space because he was about to be homeless.
plus we needed help with the street-team show promotion end of things (like THIS).

brian told him that under no circumstances should he live in our rehearsal space and come to think of it, it was deadly moldy down there. eric moved to japan (because he wanted to go to japan) and taught english and when we toured in tokyo we all bonded and eric shared his dream with me about being a tour manager. since then, he’s been following his dream and succeeding, he’s been tour managing bands for the last 3 years…he worked on The Police tour a few years ago, then went on tour with SNOOP DOGG of all things, and tour managed the dolls for a while a few years ago. i work with him every chance i get, and he takes good care of our asses.

he (all remotely) works with hayley and team chaos (who’s back at home base) to deal with our food and lodging, PLUS handles travel plans, makes sure we get paid at the end of the night, runs around making sure things don’t fall apart while we’re on stage, stays in constant contact with the venue when we’re late and lost, and makes sure all the guests who are supposed to wind up backstage can get there. in short, he does everything we don’t have time to do because we’re busy doing much more important artistic things, like brushing our wigs.

here he is in a very typical scene: working in a dark corner of a dressing room in paris… 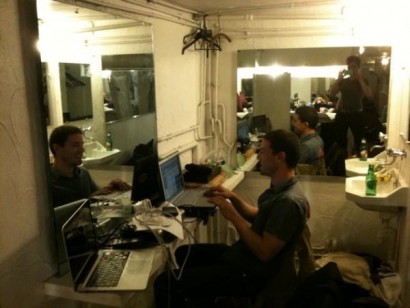 4. this is jason webley (and in his mouth, a two-headed elephant that was given to us by a german): 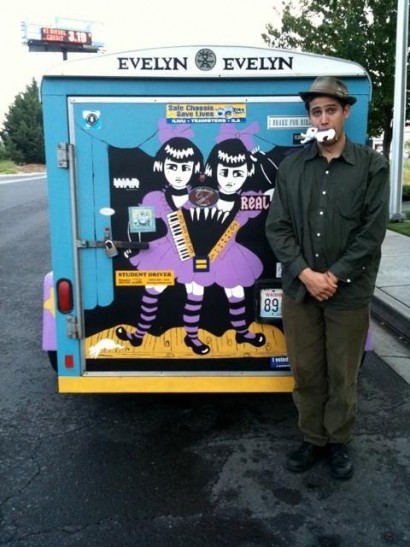 i met jason in 2000 in adelaide, a few months before i’d even met brian and started the dresden dolls.
we were both street performing. jason was screaming to an accordion and shaking a vodka bottle full of change around, and i was dressed in a white bridal gown and standing completely still.
i walked by him, and with the recognition of a special breed of pot-bellied orangutan passing another pot-bellied orangutan in the wild, knew i had found one of My People.

we made fast friends and stayed in touch, and years later when i needed a support act for the dolls, i emailed him randomly to see if he could come. and he did.
and then we became better and better friends and now we’ve been through a lot of shit together like people dying and being born and hearts getting broke and getting painfully pieced back together again. i love him like i would love my own brother and i would do anything for him, pretty much.

we made a record together recently. you should listen to it.

we made this record together because we really like each other and working together, you see.

here is jason, making magical tour puppets, in my parents living room before the tour started: 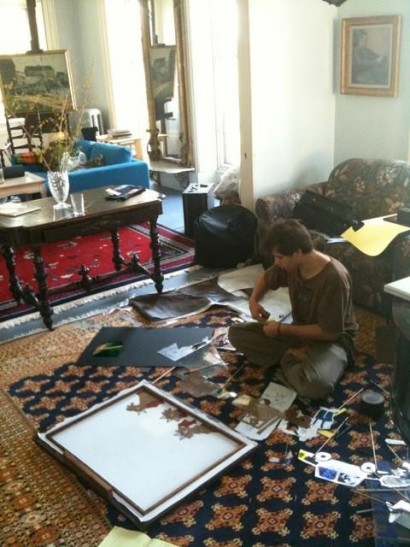 5. and this is me, amanda fucking palmer (wearing the now-notorious blue shirt that wound up on stage in seattle and will, i promise, be returned to it’s rightful owner so that he can get married & have children. long story. i’m also wearing a velvet jacket gifted to me by a girl in the signing line in seattle. note how i match my parents living room carpet): 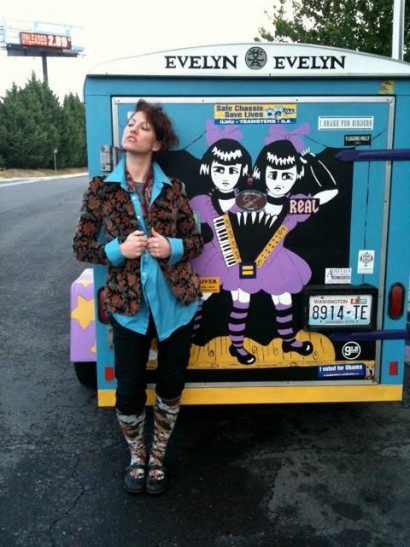 STATS
twitter: @amandapalmer
website: amandapalmer.net
height: 5’6”
grew up in: lexington, MA
lives in: boston, MA
real-life situation: punk cabaret queen
tour role: provides make-up services form the evelyn twin on the right
currently reading: “a book of silence” by sara maitland
favorite movie when i was eight: “the dark crystal”
special ninja skill: can apply my own eyebrows in under 3.5 seconds
top 3 life mottos:
– only if it’s a cultural custom and it died of natural causes.
– fuck plan b.
– PUNK CABARET IS FREEDOM

the trailer, by the by, was a surprise piece of art gift, lovingly painted by jason’s amazing friend max beery (with the help of nicole), from seattle. 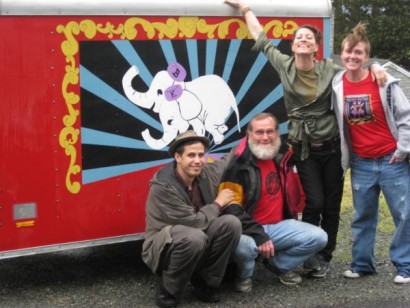 jason had asked if he could borrow the trailer, and he showed up at max’s house to a full-on tricked-out custom RIDE that max painted using Cynthia’s album artwork.
my jaw dropped to the floor when i saw it.
i cannot say enough amazing things about this man and his family, they put us up and gave me a cat to sleep with and fed us delicious foods. we’ve been lucking out in the food and lodging department so far, everyone who’s taken care of us has gone above and beyond the call of duty…we’ve been living like kings. thank you everybody. we’re nothing without you….or, we’re something, but that something is sad and hungry and staying in shitty cheap hotels.

night one sold out, but tonight still has some tickets. bring the family.

the story behind "Evelyn Evelyn"