my heart broke in several pieces during the last leg, my wonderful friends propped me up, i played shows, life not only went on but became so real it felt like chewing hard candy gravel.
but in a good way. i’m too tired to think of a good metaphor. just…life. real, family bread love tears looks hands squeezing nose-blowing shit life. fuck it.
i’ve never felt so grateful. for the bellies, for the food, for the love. i really need it, and it came in ample droves. i hugged people for longer the usual this week,
because *I* needed it. funny, that.

i wrote a new song. i hadn’t done that in a long time, not since this summer in london when i wrote “dear old house”.
i started it in portland and finished it in san francisco and played it that night, as sloppy as it was. i think it’s one of the best things i’ve written.
it’s called “trout heart replica”. i don’t know what to do anymore with the songs i’m writing.
but i am insanely proud of myself for forcing my time into songwriting time on the road.
it’s hard.
i had to be a bitch.
i had to rent a hotel room.
i had to arrange rides. the warmkessels helped.
i had to stay up really late one night and not get enough sleep before the san francisco show.
but i did it.
that same day, i hit the dicken’s christmas fair with the girls from vermillion lies and shot a video with my old friend jenessa joffe.
it’s sick. will share, i hope, in time for christmas.
if you live in san fran, go, go, go to the fair!!!
it’s the last weekend!
it’s like a renaissance fair except not QUITE so dorky and just truly magical.
i saw many living-statue bare breasts in the “french postcards” theater. go see THAT. and get some mead.
http://www.dickensfair.com

i always feel so fucking weird after tour.

howard stern played me on his show today. somebody over there found a bootleg of me singing “creep”. whodathunk.
i just listened to the recording….i love how unknown i am.
“i don’t think she’s ever recorded anything….”
wtf?
what about my five records, deck?

anyway, it was nice of him. i sent him a copy of oasis, in thanks.
they called me for an interview today and it will probably air tomorrow.

i went christmas shopping today.
i bought only books. all books.
about 27 books.
it was expensive.
but fast, efficient, and honestly, there is no better gift than books.

i always remember my good friend chuck from college interjected once, during a hallway conversation about what we were buying our family member for christmas,
“you know what MY family buys each other for christmas in pennington, new jersey? …….(dramatic pause)………… BOOKS.” serious look.

then he died. i really loved him. lots of people i lived with in college died. strange.

will catch up with a better, more photo-and-video filled missive tomorrow.

i am happy.
i finished my christmas shopping.
i wrote a new song.
i made a video.
i’m practically broke but i made the right decision to bring the danger ensemble with me. it worked.
they are my family, for the time being.
they all stayed in LA at katie kay’s and (according to katie kay) all went to disneyland today.

disneyland will never be the same.

i had meetings in LA. i met with a book agent.
you’ve pestered me enough. i’m thinking about writing a book.
not so much about myself.
that would be too obvious. but about Things.
i will need help, from you. i will ask.

i read this randomly because i get a google alert from people’s blogs, and sometimes i just go look.

Next thing: New Year’s Eve
Holy shit I am sooo excited. Since I last posted, Amanda announced that she is throwing a special VIP pre-show party at a loft in Brooklyn. I went back and forth on whether I should go or not because it was $75 but who was I kidding. I bought it. I guess I was worried that I would feel out of place. The Dresden Dolls community is so artistic and talented and creative and I am…well I am not. I am so in awe of them every time I go to shows. But then I came to my senses and remembered that more then anything else, the DD/Amanda fans are the most accepting, non-judgmental loving and awesome people in the world. It’s going to be amazing. Now I need an outfit.

But getting back to what I mentioned last post.  Before the NYE show last year, I had seen the DD for the first time on the True Colors tour and then I saw Amanda solo with Aberdeen City opening. Neither show was a typical show with the awesome DD fans. The NYE show was the first time I was a part of that. I remember being so in awe of them. The brigaders and all the fanfuckingtastic outfits and there was just soooo much LOVE that night. It really triggered something inside. I was not a loner growing up. In fact I had many friends. But I always felt different. I knew deep down that I was not the same as these people. But I felt like I fit right in at the show. Since then, I embraced that odd, darker side of me that I always thought made me a weirdo and I am so grateful because of it. That’s part of the reason why I am so excited for NYE. For me it’s a celebration of being true to myself and being with others that feel the same way.

when i find things like this and read them, i feel every problem in my life go away for a moment, i feel like it doesn’t matter if i just disappear completely, i feel like i’ve achieved the kind of success
that i set out for in the first place, i feel like i’ve come full circle, i feel like the fucked-up loner that i was in high-school, the walkman-wielding-blue-haired-spiky-fuck-all-y’all one eating her cafeteria lunch alone in the concrete practice space….that girl does a time-space continuum and explodes and catches fire and smiles for a second.
i think to myself: we did it. 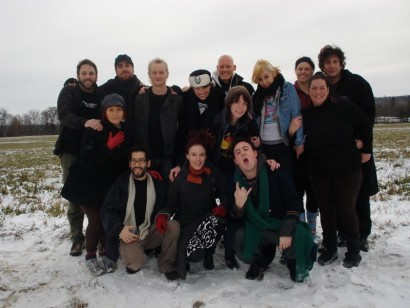