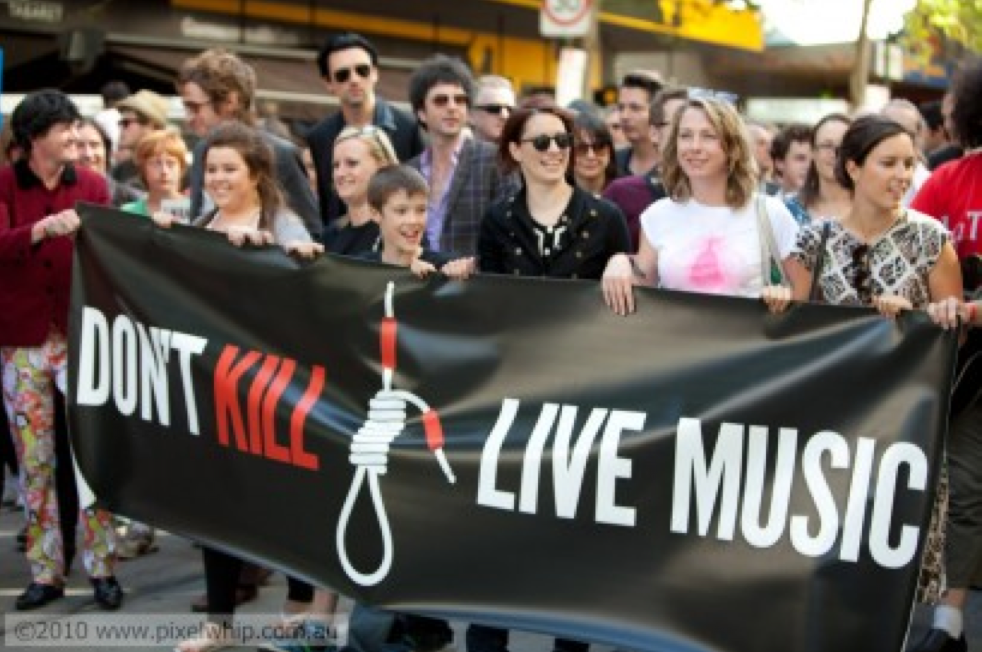 godDAMN i could not have had a more awesome day.

i just came home from a random surprise Melbourne dinner with fucking mike patton and the entire reunited Faith No More.
all incredibly down-to-earth, inspiring guys. i sat next to roddy bottum and we had great talks about bands and music and what it’s like to leave and re-unite again. 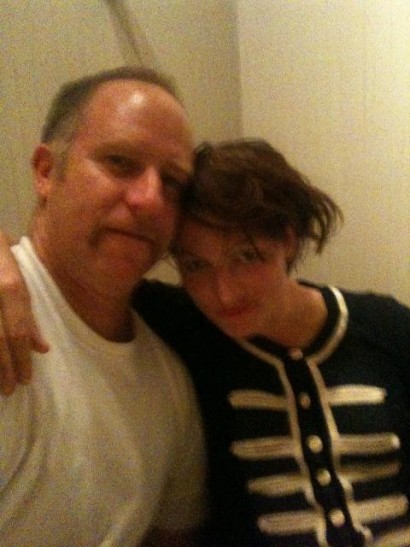 they weren’t at the rally; they’re in town for their own shows & for soundwave (my nemesis festival!), but i literally bumped into a mutual pal (well, our promotor-in-common, michael gudinski, not SO random)
and he invited me out with them.

….my plans in life have officially collapsed. and you know what? i’m fucking fine with it.
when huge street protests and vegetarian chinese dinners with amazing people call, you FUCKING GO. you GO.

honestly – my goal in hitting the studio in adelaide was to…i don’t know. make good things happen?
sometimes your plans get fucked up and other things come about. so you make other good things happen.
who fucking cares. you leave your plans by the side of the street, festering in a pile. go, you go, you go.
and then you blog about it and waste more time.

some great pictures form the rally. i took them all unless otherwise noted:

i heard the count was over 70k people attended.
it was so, so inspiring to see so many people in a city rally around a cause like this: keeping music thriving int he small club scene.
not every city would take up arms like this if it’s music scene came under threat from lame liquor licensing.
seriously. would yours?
you can feel the pulse of this city,it beats with art and love.
that is why i love it here so much.

here’s a wee lass hanging out in the bar before we marched: 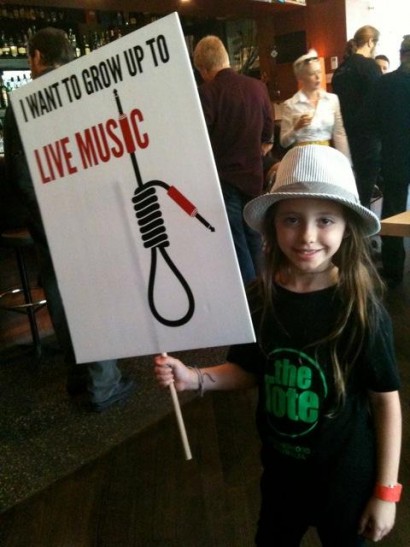 the gathering crowd below…. 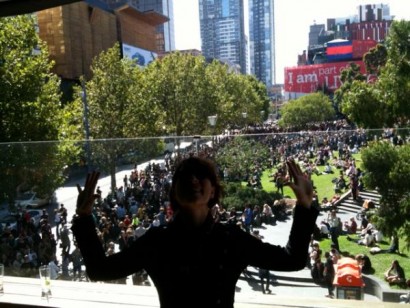 (photo by justin from The Age)

the march.
behind me, the guys from the Drones, next to me, angie hart and missy higgins: 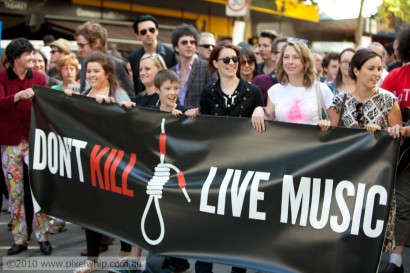 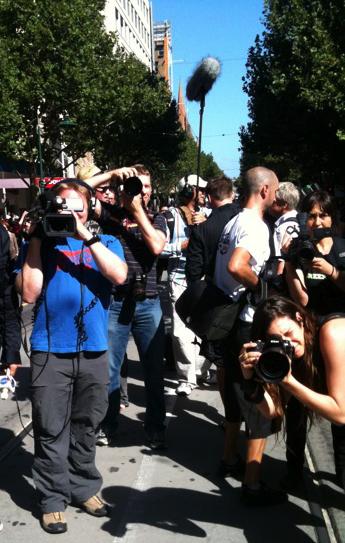 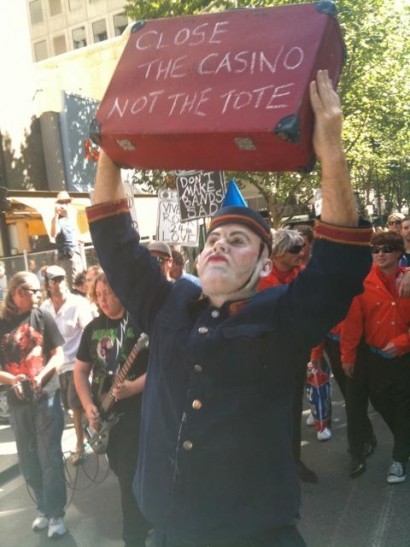 the uber-awesome paul kelly, one of my songwriting heroes, in front of parliament… 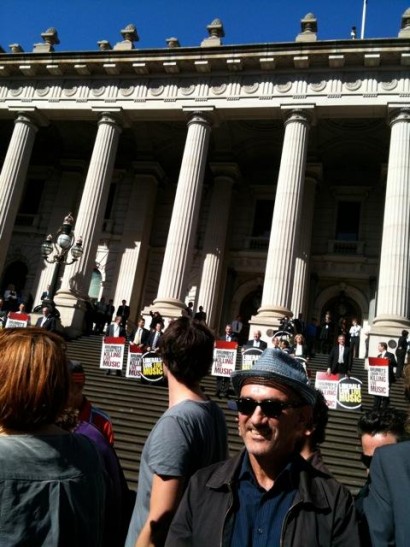 the crowd in front of parliament…. 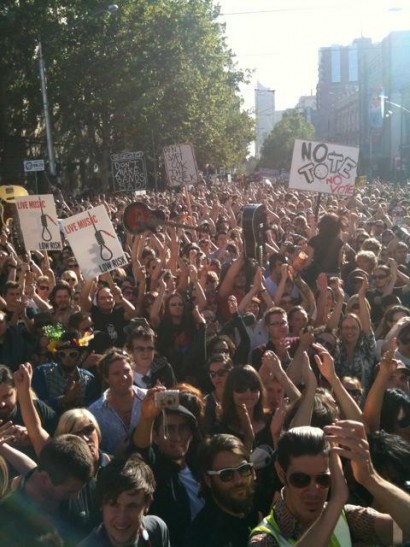 when we finished the march and took to the parliament steps for the speeches, i found myself standing next to a handsome gentleman i didn’t recognize.
he told me he’d heard of the dresden dolls and liked our music and was happy to meet me.
then he told me he was fucking MICK HARVEY from nick cave & the bad seeds.
i almost shit a brick.
i own tons of his records and have just never known exactly what he looked like.
i tried to make amends and would have prostrated myself in *worship worship* stance on the parliament stairs if there hadn’t been all those thousands of australians watching.
MICK HARVEY. gaaaaaaaaaaaaaa.

the speeches touched on the really important fundamentals, and i found my head bobbing in agreement constantly.

the basic, overarching theme: MUSIC IS FOOD FOR THE HUMAN SOUL.
it needs to exist in little, fertile places, not just huge, soulless arenas.
if i may run with this metaphor: small music clubs are the kitchens of musician culture, where our souls get baked.
as paul kelly put it (more or less): there are no rule books for being a musician.
instead: the small clubs, bars and venues are our universities. 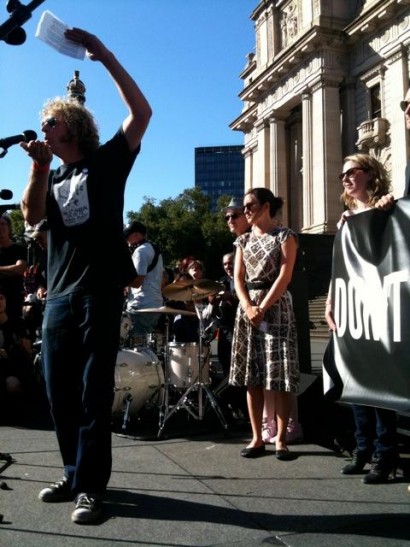 footage from this speech, and some cool random clips of protesters HERE.

an awesome t-shirt, if i do say so myself… 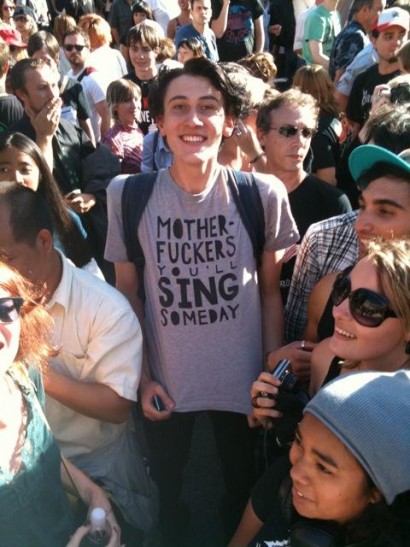 i did a mini-ninja gig right after the rally in a hidden nook and someone requested “sing”, which i’ve never learned on uke.
luckily three people busted out their own ukes and started playing it.
and we SANG…all together now.

and there was this little peanut of a fan… 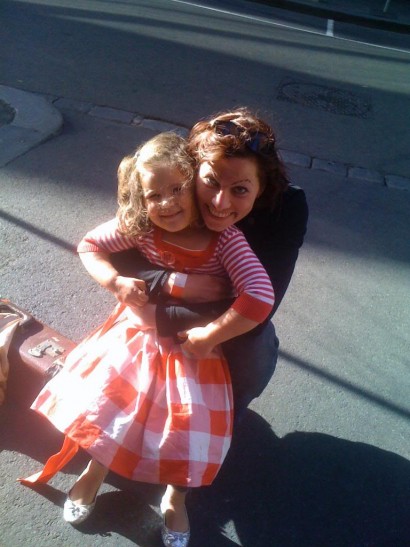 i can kind of die happy today. i will sleep like a rock.

amanda at a poetry slam