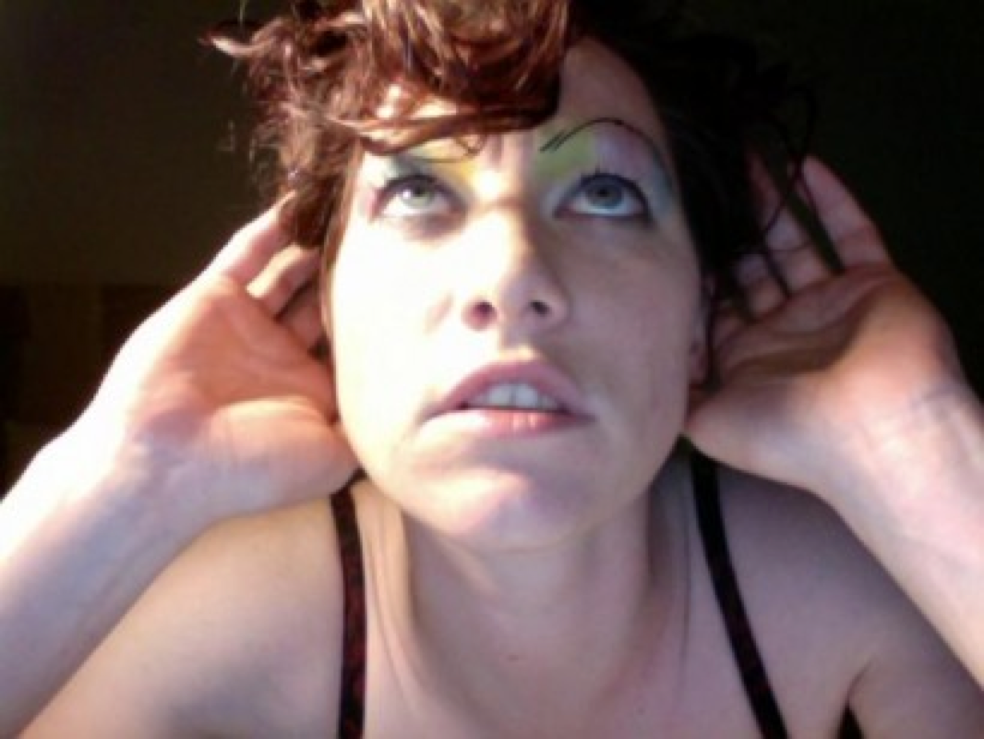 brain runneth over, but i’m finding space in these few days to write, practice, connect, get ready for tour and do some random recording in adelaide.

i’m tweaking some old songs and finishing up some half-written stuff that i’ve never gotten round to….
….but mostly i’m just playing sad little radiohead covers on my ukulele and avoiding actual practice.

a radiohead ukulele cover album might just have to be what i do to Shed The Past and Find God. so be it.
some people ACTUALLY find god and record christian albums. i just find radiohead.

the evelyn record is going on sale in a few days and jason, team chaos, and i are getting ready to push the launch button on the pre-order, so please stay tuned. again, make sure you’re on the list.

i’m spending a lot of time thinking, researching, and reading in preparation for the summer/fall project…which i can’t officially announce yet, but i can tell you this much:
it’s a full-blown musical, i’m in it, and it’s going to slay. more i cannot say.

from one of our source readings, “the third reich of dreams”… 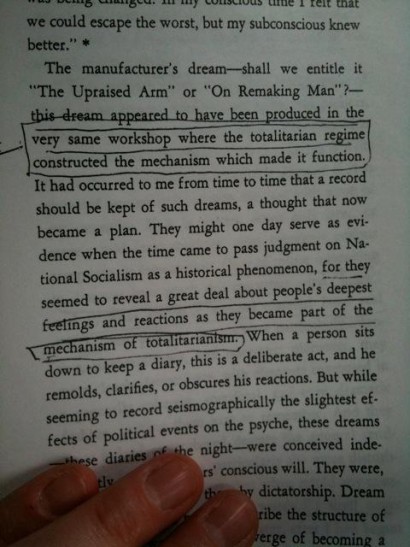 i can’t wait to tell you.

here are some fantastic photos from the sydney opera house ninja gig, worthy of posting because they’re so beautiful.
all told, i think about 300+ people came, on about 6 hours notice….a ninja gig RECORD.

i was blown away at how fast we were able to get so many people out…
the power of twitter and the power of the internet to gather people is VAST and it is AWESOME.

we didn’t get rained on for the first hour, but then the storm started to make us wet, so (after a request for “umbrella” on ukulele….obvi) we paraded under the opera house steps and kept the gig going.

it was really, really wonderful.
i felt so happy and at home with everybody.
i want my life to be a never-ending ninja gig. i do, i do.

the folks who run the opera house (craig in particular) were incredible, so helpful and happy to have us there. i love australia. they love art here.

the book swap idea worked out well, though the rain prevented us from setting up a whole leisurely ninja library.
people have been twittering each other book thanks and love, which makes me really happy.

these were my two donations. i didn’t have anything give-able-awayable so i sauntered down to a great little bookshop in potts point (recommended, it’s a little hole-in-the-wall called macleay bookshop) and bought two of my favorites… 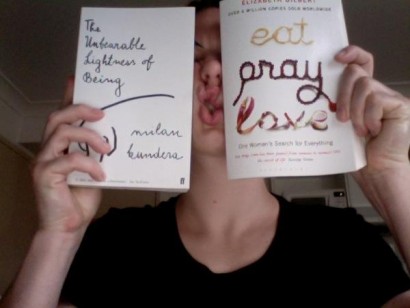 it was one of my most favorite ninja gigs, i must say.

i took lots of questions and we all talked a lot.
the best moment was when someone asked “where do we go when we sleep?”.

someone shouted out that we ought to ask neil, since he’s the dreaming/sleeping expert, so i called him & we put him on speakerphone.
(we also made him promise to come to australia. he did. next year, we’ll invade.)

this moment was caught on youtube and is really pretty adorable:
http://www.youtube.com/watch?v=WArRT1iFLN4

here’s us, while the weather was co-operating…

(all photos by Clare Hawley) 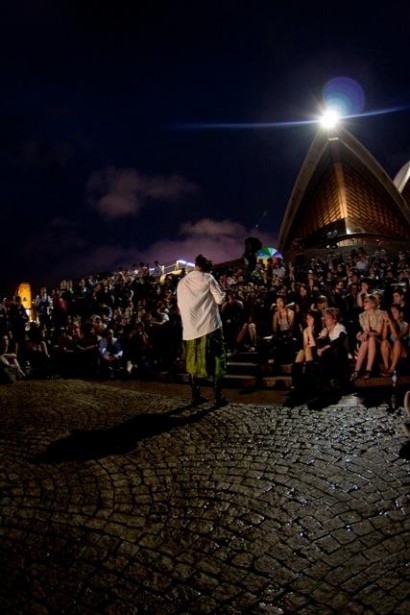 see how dry we are, and how happy?

then it rained….but still we were happy, and somebody held an umbrella ella over my head while i played: 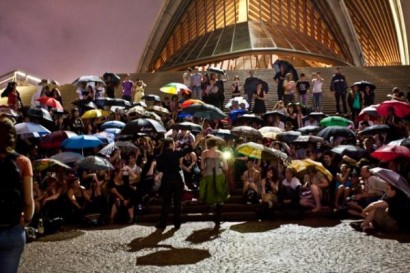 then it got too wet to stay on the steps.
but we didn’t want to end.
so we had a parade…. 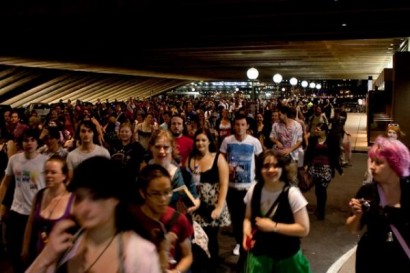 …and the parade took us to out new home under the cover of the opera house steps…. 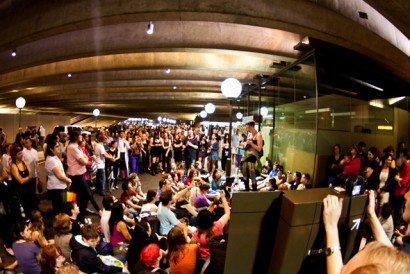 …..and as a finale, i did my ralph macchio/karate kid impression: 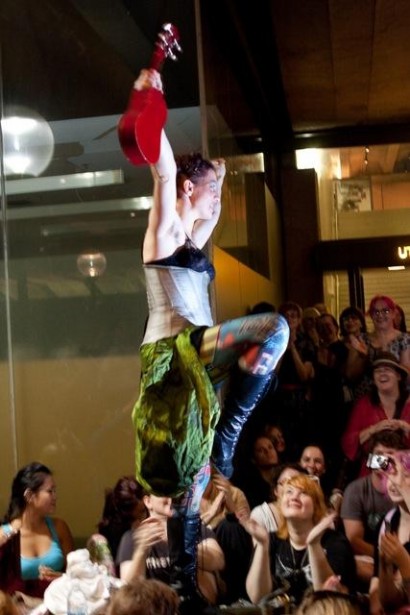 if you’re in MELBOURNE: please please come to the

i started hearing about this the minute i got in town …
it’s a tragic bunch of bullshit going down: small clubs all over town (including the legendary venue The Tote) are being forced to close their doors due to new laws insisting on paid/trained security for any club that presents live music (even if it’s an act playing acoustic guitar for 15 people in a coffeehouse).
this is absurd and people are PISSED, and the rally is hopefully going to bring a shitload of awareness to the cause.
most everyone i know in town is very sad about this, and as a hopeful part-time resident of this beautiful city, i’d hate to see it’s vibrant music scene get squashed.

i’ll be there with a bunch of other musicians (including paul kelly….see below), look for me in the back-up singing group when we do the giant AC/DC sing-along.
if you’re there, make sure you’re following my twitter feed…i’ll let you know where i’m at and when.

(there’s also a thread on the box for people who want to help promote the forum show / meet up: http://www.theshadowbox.net/forum/index.php?topic=10912.0) 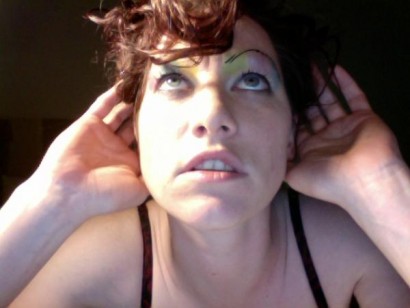 p.s.s. i started talking to my cab driver on the way back from the airport yesterday. he’s also a tennis instructor. on wednesday, we will play tennis. that is all.