first, two painfully important thangs, slightly boring for the non-locals….so skip these if you’re not from melbourne or new york.
though they’re in hilarious contrast if you wish to read on for sheer amusement. 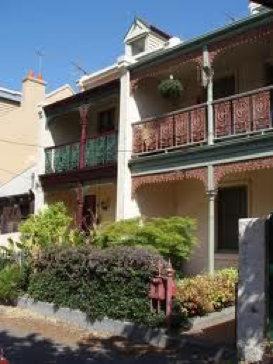 in the “HOUSE ME AND MY PALS” department…..

i have some nefarious plans that haven’t come to light, but they will soon.
what i CAN tell you is that i’m going to need ALL SORTS OF ACCOMMODATIONS in the month of february and march.
in february, i’m looking for A PLACE TO LIVE and i’d love it to be a cozy little old 2-3 room apartment in fitzroy/collingwood/richmond or honestly ANYWHERE near there where i can hang my hat for a good long while and feel infused with life and not live in a lifeless godforsaken rental room with no class or vibe.

it’s long enough that i don’t want to stay in anybody’s house or apartment (not that i don’t love you)….but if you happen to be leaving town or have a spare 3 rooms in your mansion, I’LL TAKE THEM.

i’m also looking for digs for several co-conspirators of mine for the end of feb and most of march…so if you DO REAL ESTATE, KNOW ANYONE WHO DOES, or KNOW ANYONE WHO IS GOING OUT OF TOWN AND LEAVING THEIR HOUSE IN THE MELBOUNRE AREA EMPTY – email us!!!!!!!!!!!!!!!!! us@amandapalmer.net.
thank you thank you. always better to go through you guys than the anonymous internetz. 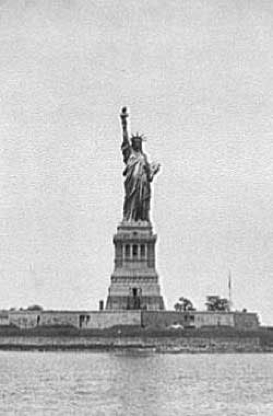 (and now for something COMPLETELY DIFFERENT)….

neil and i rented an amazing apartment in park slop, brooklyn, about six months ago that we’ve barely used and the time has come to rent it on / sublet it.
it’s AN INCREDIBLE penthouse-y space (brand new, hardwood floors, 2 beds, 2 baths, 11th floor, two balconies, state of the art everything, doorman, blowjobs) in park slope a few blocks from the massive greenwood cemetery. i’ll admit it: it’s schmancy (thus our giving-up-ness of it…if it was cheap, we’d just use it for keyboard and book storage)….but the TIME HAS COME and we need to rent it onward. it has the distinction of having been slept (and spelt) in by me, neil, superkate, michael mcquilken, and all our various lovers (ok. well. not that many. but ENOUGH TO MAKE IT AMAZING). if that doesn’t sell you, maybe the cabinet under-lighting and the view of the statue of liberty will. if you’re interested, email kate at us@amandapalmer.net and she’ll hook you up with more info, pronto. i’m hoping to get it rented / sublet’d from january through may (or rented away altogether). if you know anyone looking, please pass the info on!!!!
……………………………….

AND FOR THE REST OF THE WORLD

…..as promised on the tweety-thing, as craig ferguson would say……….

some wonderful photos from the OZ VAULT.

today neil and i went on a trip down the great ocean road. it was BREATHTAKING….and our hair did fly accordingly: 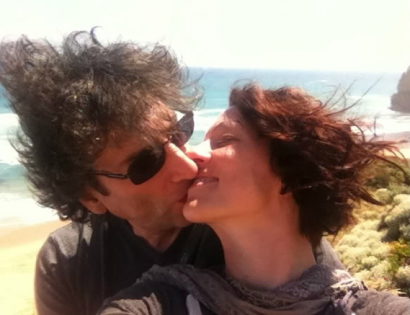 i am in awe of the beauty of this country.

america is beautiful, and i’ve driven through it’s vast canyons, valleys, and beaches….
but there’s something about australia.

maybe it’s just because i’ve decided to love it. maybe i could say the same thing about neil.
but i don’t care.  right now, i have them both, and i’m the happiest girl in the universe.

….this whole collection of photos is lifted from a blog that i had sitting in my drafts folder from about….oh….almost exactly two years ago.
this was the tour in early 2010 (i think most of these are february) … i was touring totally on my own, and hooking up with various partners in crime with mikelangelo, hera, and lyndon chester….all of whom are about to figure in the OZ and new zealand hijinks of the coming month, so i figure these photos can at least be justified as a a commercial for their bad-ass-ness.

but mostly i just want to take a walk down mammary lane and drag you with me.

(NOTE: most of these photos have photo credits but some have been lost in the laundry. if you KNOW who took one of these & it’s not credited, EMAIL the photo&credit to photo@amandapalmer.net and w’ell fix it right up.)

me playing with the string quartet – all assembled by the amazing lyndon chester, at sydney opera house…

this one is from the melbourne show at the forum. the hot dude smiling is paul kelly – one of the most incredible (and in america and europe, underrated) songwriters and performers in australia. 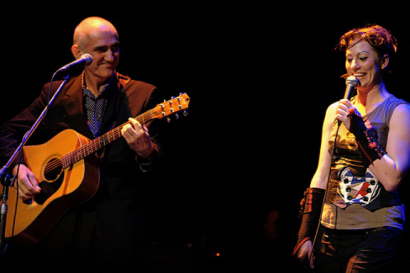 i was turned onto his music by a lover in australia in 2000 – my first trip, before i was in the dresden dolls, and just street performing – and it stuck with me hard.

in these photos we’re covering his song “winter coat,” which was one of the songs on his 2-disc live collection that i brought back to the states in 2000, and which kept him endeared to me even when nobody in america knew who the fuck he was. he’s a national treasure over here – akin to bob dylan or leonard cohen, and rightly so.

his songs are BRUTALLY honest, and beautiful, they speak from the heart without being sentimental, ever, and draw from the folk tradition without being stodgy….basically, all of the things that made dylan and cohen great and also inexplicable. 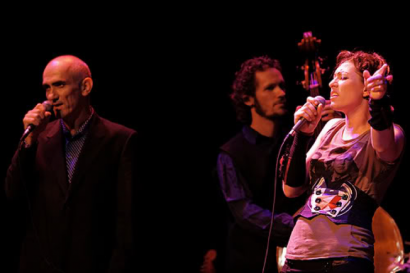 here’s the CLIP of us playing “winter coat”:

here’s me at the same gig of mine at the forum…with another great of australian music, mick harvey.

you’d probably know him from his work with nick cave and the bad seeds, but he’s also an amazing solo musician.
he’s based here in melbourne… 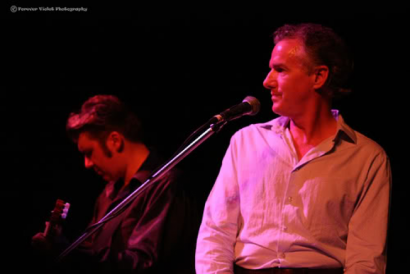 in the background, that’s mikelangelo on guitar, playing along with me and mick AND paul kelly covering “henry lee” by nick cave.

honestly? to be on stage with all those people at the same time made me want to die.

the only thing that might beat it is if i manage to get PJ Harvey, TuneYards, and the Dresden Dolls all on stage this january when we all play the same festival in tasmania.
IT MIGHT HAPPEN.

say wiccan prayers (or whatever the fuck you do)…

here’s a photo from my ninja gig at the sydney opera house that i forgot to post
someone brought an inflatable zebra: 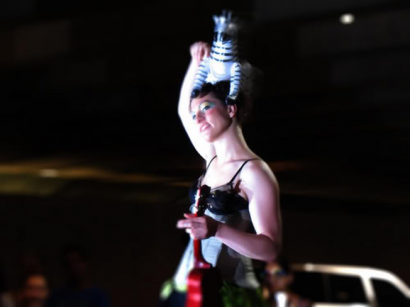 (rachel young, via flickr.com)
here’s a brilliant one from the Brisbane ninja gig…. 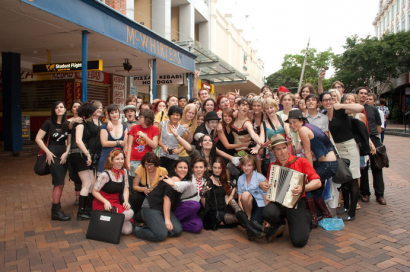 same ninja gig, in the institute of modern art….trying (i shit you not) to sing a ramones song, LEARNED ON THE SPOT, via iphone……(that’s mikelangelo with the ‘stache and accordion): 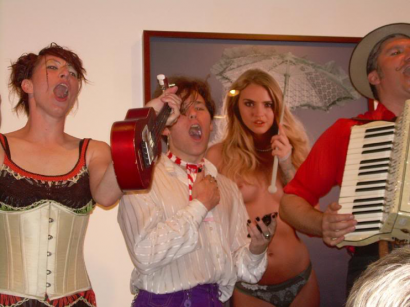 and here’s us, BLITZKRIEG BOPPING: 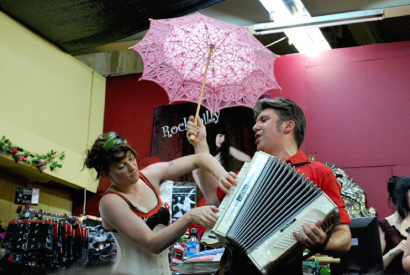 the parade (which some of you will remember from the “down under” CD art)…. 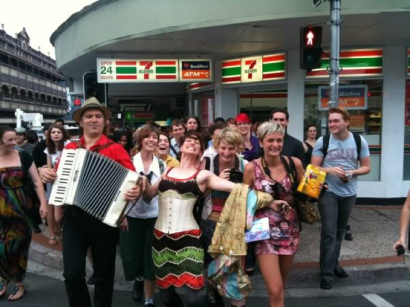 (by bec)
and this one kills me. it’s from byron bay (bangalow, actually)…
i got a request for “boston” from a girl in the audience…kobi…and i shouted out that i didn’t really have the lyrics and chords on hand (ie: in my brain).

she produced the virginia companion (aka the sheet music book from “yes” and “no virginia…” – which is almost sold out HERE on post-war trade) and insisted i do it. so i insisted she come up and sing. and she did. and she KILLED it. 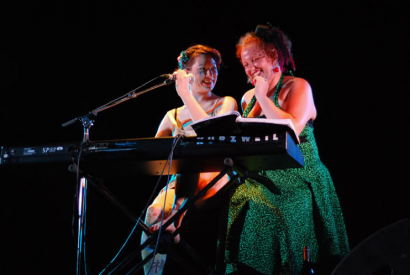 here’s mikelangelo later at the same gig, IN HIS UNDIES: 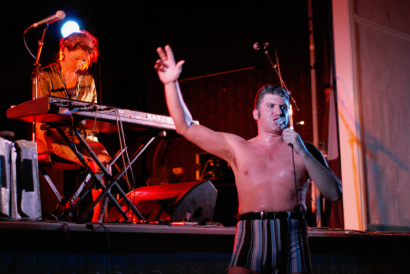 me playing ukulele OUTSIDE, at that same fatal gig: 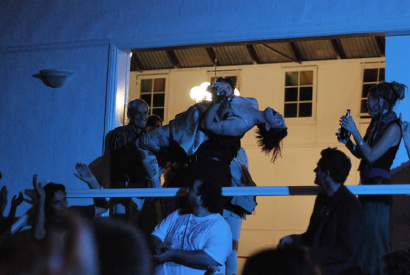 and here’s a good one (the best action shot): 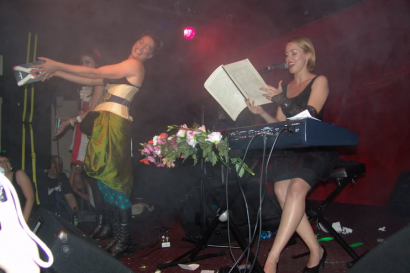 (from a whole set by guitarhero posted to the shadowbox)
this is me and Hera Hjartardottir (say it nineteen times fast) opening up for me in new zealand that same year (early 2009).

this is shameful, but fact…i saw a copy of twilight (yes, THIS “twilight”) lurking in the backseat of someone’s car, and i picked it up…and i started reading it…

and i did not stop.

i did not stop until i was done, 5 nights later, with a soul full of pain and guilt.

i had READ “twilight.”
this was far past the point of no return. this was no cult phenomenon.

i had seen “twilight” advertised in EVERY AIRPORT I HAD TRAVELED THROUGH in the past six months.

this was SHAMEFUL.
but i’d finished it, and there was nothing to be done.

so i asked hera, who was icelandic and schooled (in my imagination, at least) in the black arts, to help me purge the experience from my soul.

we chanted an ancient icelandic prayer, threw the book out into the audience, and hoped that my sins would be vanquished…..

that’s all for now, lovers.

i wanted to have a reason to post this picture from the bangalow gig….but there’s no reason, other than that i’m really, really happy in it, and wearing a slip that someone had just made me with the text

fuck yeah. given what’s happening with the pubic hair revolution in fashion…… 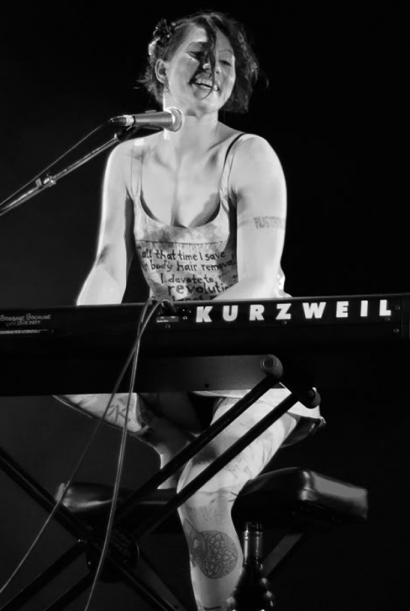 p.p.s. if you donated to the “evening with” kickstarter, there’s a very awesome update for backers only…read it right HERE if you haven’t, yet…