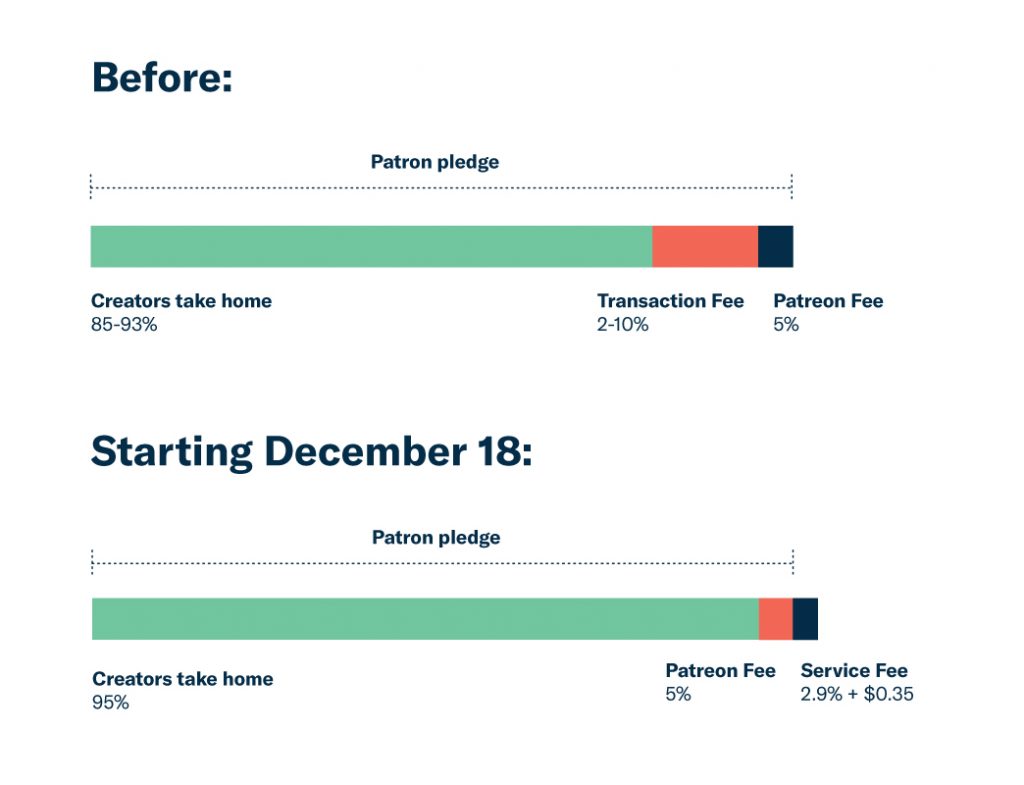 i bet you woke up today thinking “i wanna see graphs!”

forgive me if this post is boring af, but it’s important. i’m going to stay live here on the comments for the next hour or so to discuss with anyone who wants to. please read this whole thing before commenting. i love you.

this wasn’t the post i wanted to make today, in fact i wasn’t going to post today AT ALL, i was gonna write something totally awesome and surprising. but life threw this our way, so we gonna deal with it.

today patreon has announced that they’re changing the way they collect fees. they sent out emails to all patrons about the upcoming change – you probably got one. if you found it confusing, we are hopefully here to lessen your confusion and also provide some….analysis. and gripe a bit.

this is a big deal, and i want to chat openly with you all about it. what it means for you as my patrons, what it means for me as an artist using patreon….and, i’d like to answer your questions. while i’d rather be writing today, this is huge enough that i’m gonna chain myself to this mac and talk to you SO THAT i can write tomorrow. it’s all connected, since you’re paying for me to be able to sit and write in the first place, capiche?

first, here is information from patreon about what’s happening and why:
their blog post: https://blog.patreon.com/updating-patreons-fee-structure
their FAQ: https://patreon.zendesk.com/hc/en-us/articles/115005631963 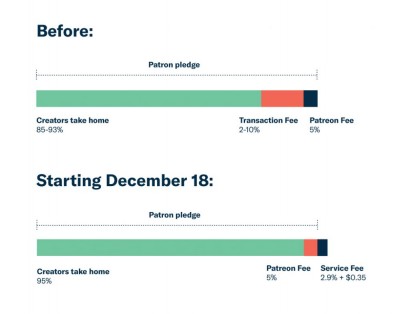 and here’s an opinion about this change from a third party news site, techcrunch:
https://techcrunch.com/2017/12/07/patreons-new-service-fee-spurs-concern-that-creators-will-lose-patrons

i talked to jack conte (the CEO of patreon, and stage-mate of mine, he’s in a band called pomplamoose who used to play with me) about it on the phone about an hour ago. i shared my thoughts and my concerns and heard from him about their reasons behind this.

his basic take is that this is going to be better and simpler for creators (we will be seeing 95% of our profits, clean, instead of closer to 85%-93% percent, where it’s been in the past).

that difference, instead, is going to be passed over to the patrons, who will now be picking up the processing transaction fees instead of the creators. i get where he’s coming from, and sure it’s nice to think that i’ll make a little bit more money (and more predictably), but…it’s not what i would have done.

i don’t envy any fucking CEO of any company. every time i talk to jack, i mostly want to cry because i remember when he spent his days making art, and now he spends his days making a company. although sometimes i have to admit: i am, myself, the CEO of my own company. it’s a small company, but it’s a real company. i have an office, all the expenses that come with renting an office, two full-time and several half-time employees and a collection of agents and managers who all take a collectively hefty cut of what i earn. i pay my team’s insurance. it costs a shit ton to run this show.

sometimes we run out of money because production things go awry and life sucks for everybody. so maybe: i don’t envy myself.

someone on twitter was decrying how stunning it was that patreon dropped this news with no warning, and while i agree, i’d also like to defend jack as one of the most reachable and collaborative CEOs i have ever worked with.

i responded to that person on twitter with the fact that even when i was one of the top-followed people on twitter (back in Ye Olde 2009), twitter NEVER, EVER reached out to me to discuss changes in the platform, nor did kickstarter when i was top earning musician there. in general, jack & co get massive points for communicating way more than the average bear, even when it’s hard shit like this. and i do think they made a mistake in how they rolled this out.

patreon only gave me a one-day heads up about this change, and i wasn’t happy to hear about it.

had i been given the choice between keeping things the way they were (namely, the processing fees were just an annoying cost that i had to suck up and eat, which i’ve gotten used to) and passing the transaction fees along to the patrons, i never would have chose this.

then again, i’m getting used to the fact that we are all in digital bed together, and while it pisses me off, it’s not going to drive me away from using patreon. i haven’t been in agreement with a lot of the things that twitter or facebook are doing lately, either, but it hasn’t forced me off the platforms. it’s frustrated me, but i need these things in order to work and share my work.

i know enough about business to get that patreon couldn’t just swallow all these costs themselves; they’d be crippling.

but i also (and anybody) could see from the graph above that patreon’s income is going to go up due to this decision, because they are going to be getting 5% of a larger pie (the creator’s pie, that is). so their uber-cheerful “this is great for creators” seems a little disingenuous. it’s great for patreon, too.

i get it. they’re a new company, and they need to run their company, they need to figure out how to make a sustainable future workable.

i am also waiting to understand what this means for people (like me, and many of you, i’m sure) who back MANY people at the $1 level. will a toll be levied on every single transaction with every creator? will it be possible for them to aggregate that processing fee?

for instance: if i’m backing 100 of my favorite artists at $1 each, it does seem absurd that i should pay an extra $38 a month if it’s really a “processing fee”. the card is being processed once, right? so charge me for that?

i’m waiting to hear back from patreon about this, and i will pass on what i learn. (i may even learn in real-time while this post is live).

mostly, upshot: i don’t think this is seismically awful, but i do want you to know about it and know the reality of it.

i would expect this to effect the $1-level folks more than anyone, because your pledge is effectively going from $1 to $1.38, which is a massive increase.

(a few people on twitter have mentioned that if you’re overseas, it’s even more annoying, because this is ON TOP of the VAT tax, which can be sizeable already).

one thing i would like to remind you, if it’s any comfort:

the extra money that you’re paying is going – mostly – to me, the creator. you’re getting charged the fee so that i, the artist, don’t have to take it on.

you might look at that and say: “that’s nice! i’m happy to take that pressure off the artists i am trying to support, hooray, more money for them to live and make art” or you might say “fuck that”.

it is a free country, and that’s why i’m writing this long rambling blog and being totally transparent about this instead of slinking into the backroom and hoping nobody notices this – that would be shitty, and against everything i stand for (especially here on patreon, where i go above and beyond to be as honest with you all as i can).

i hope you stay with me through this change.

we will use the systems that work for us, and we will leave if and when they ever stop working. i have looked far and wide and as you from the early days know, i thought LONGGG and hard about whether to use patreon or just set up a patreon-like-system on my own website via paypal (like, say, maria popova of brainpickings, or rabbit rabbit radio, or NPR).  i came to the conlcusion that i didn’t want to be jack conte, that i was happy to give 5% of my potential profits to a company like patreon to deal with teh headaches and back-end dramas of credit card fees and endless data crunching and massive server melt-downs and so on and so forth….

and on patreon i will stay as long as it is the best solution – for me as a creator AND for you as the nice, enthusiastic person supporting my art and trading your dollars for my creations.

we are all in this one together, loves.

right now, literally, i’m here, live….for the next hour or so. please talk to me….please hit me with your questions. i’ll be here answering questions in the comments with my gal hayley, who some of you know as a long time member of team afp, she helps me with all the things, and with all the projects i release through the patreon. she’s been with me since the days before the kickstarter and for awhile she worked in crowdfunding herself (for kickstarter). she’ll chime in along with me.

i wanna know your thoughts.

p.s. someone mentioned on twitter that we should start Matreon.

make art & smash the patriarchy all at the same time? I AM SO IN.