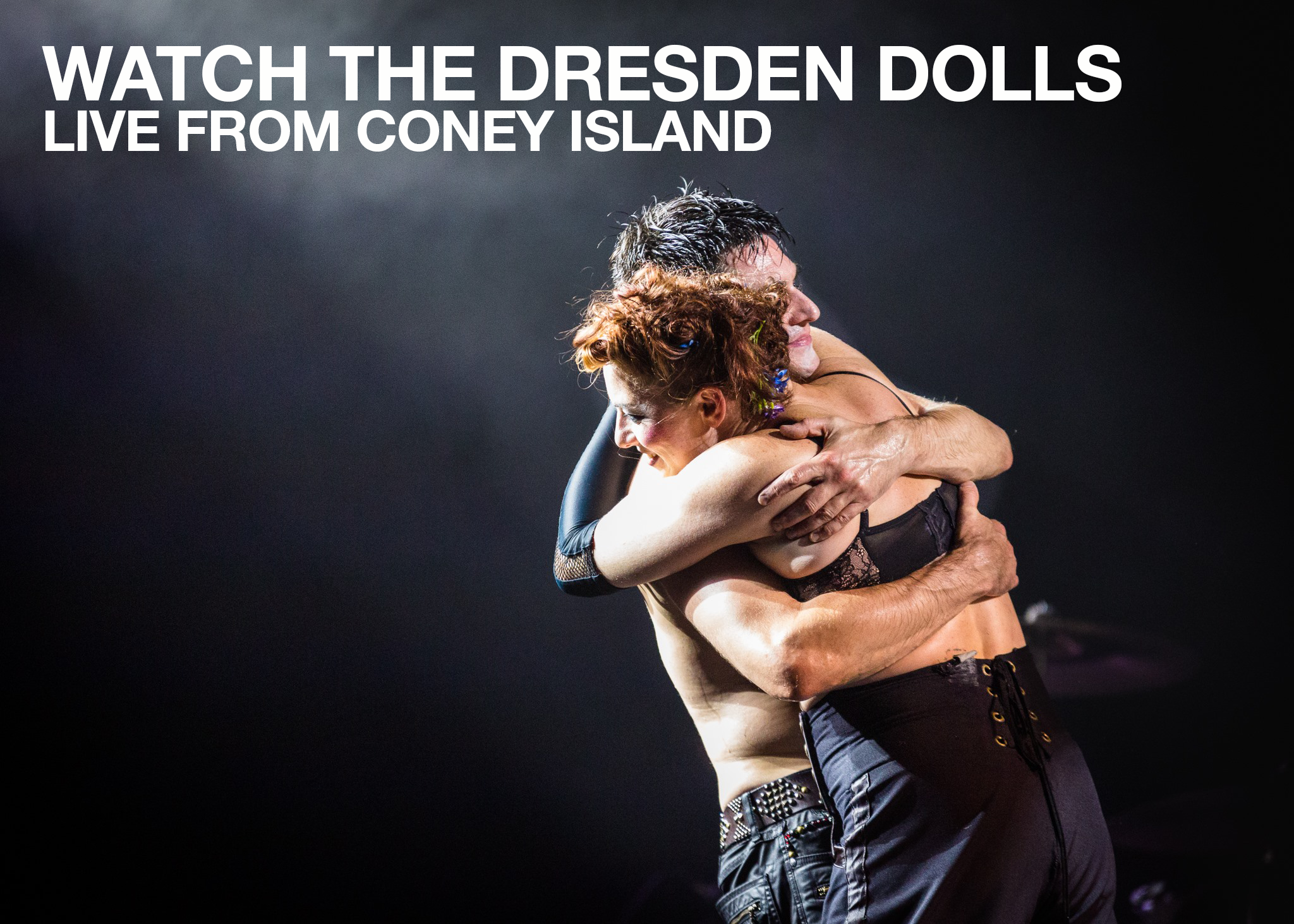 (THIS IS AN OFFICIAL THING! and public post, with a thanks to all the patrons…)

it worked! we captured the full beauty of the dresden dolls live at coney island amphitheater with SIX FANTASTIC CAMERAS and brilliant sound. includes bonus footage of the crowd, the brigade AND the amazing opening band, brooklyn’s own PWR BTTM.

thank you so so so SO much to everyone who *came* – over 10,000 of you! –  to the dolls shows in kingston, boston and coney island….AND those of you who tuned in via the webcast. each night was so goddamned unforgettably special. the dresden dolls –  i.e. the magical cosmic rock love explosion of spaceship earth punk cabaret power ALL ONE that is me & mr brian viglione –  man…it’s a thing to behold.

so many people told us that the band has just gotten better – since we’ve both matured so much as people, as musicians, as souls. we agree. we loved playing every minute of these shows – we still got it, people. and you give us a reason to explode.

so here it is: you can view the ENTIRE coney show here: https://huzza.io/amandapalmer/live-stream/the-dresden-dolls-live-from-coney-island

KILLING IN THE NAME (rage against the machine cover)

we’re working on getting easy-to-access youtube links of each song from the dresden dolls set and will let you guys know when these are up.

TO ALL THE PATRONS….this show would not have been filmed, and available for free to the public, without your patronage. your money went to the HUGE crew that captured the sights and sounds of the show…there were TONS of people who walked away with not only a paycheck but a massive soul-grin, knowing that their faithful production work, camera-work and sound-work made it’s way ALL AROUND THE WORLD so that thousands and thousand of souls in the present and future could enjoy the magic of the dresden dolls.

THANK YOU FOR BEING A PATRON.

you are part of the fucking magic, my friends.

pssssst: $3+ patrons and $5+ patrons….watch your inboxes. you’re getting some special dollsy download surprises next week.

and one last note: our internal road / merch / stage crew deserves a MASSIVE THANK YOU…you guys didn’t see them but they worked their goddamn asses off: alex, sid, nick, bill h, superkate, jaron, dave and jeff, kathryn and her entire camera/technical crew at virtual arts….and the webcasting team at huzza…THANK YOU FOR WORKING SO SO SO HARD ON THESE SHOWS – on stage, off stage, on line…..we are so grateful to have spent the week slaving away with you.

p.s. ….one last thing! in case you’re wondering we have plenty of the  posters/shirts/merch from these shows – featuring the epic designs by malleus & sarah beetson – and will be putting this live on the shop in the coming weeks. stay tuned.