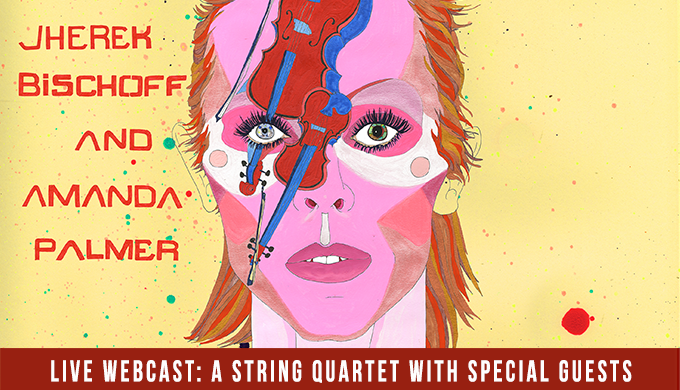 WE ARE WEBCASTING THIS TUESDAY’S CITY WINERY SHOW!
two solid hours of
the webcast is **FREE** to the public and funded by the patreon!
share the link with friends!
it’ll start at 7:45 pm EST on tuesday, march 29th, it’ll go til at least 10 pm EST and the link to sign up for the webcast is HERE!
https://huzza.io/amandapalmer/live-stream/an-evening-with-jherek-bischoff-amanda-palmer-and-friends-at-city-winery-nyc

VERY IMPORTANT: the BOWIE PORTION OF THIS WEBCAST IS LIVE ONLY, because of legal reasons/rights. SO TUNE IN….
with our lovely patreon budget, we’ve hired a super-high end company to webcast/thing this (thing cast? web thing? WEBCASTHING??)

JHEREK will be playing a few of his own quartet-songs, and he and i are going to play a handful of OLD and NEW amanda-songs. (some never before played).

we got some shit up our sleeve.
TUNE IN!!! save the date, grab popcorn, and watch the whole show, it should look and sound BEAUTIFUL!! you WON’T BE BORED. we’re also trying to do a little pre-game from 7:45pm – 8 pm backstage with the strings and musicians, and a little post-show webcast-only wrap up.

….and thanks as always to the YOU for making this possible. we wouldn’t have the budget to do it otherwise.
tune in on tuesday! i’ll send another one of these RIGHT before broadcast to poke and remind y’all. make sure you spread the link love when we go live and get people online to tune in.
like all the other Thing-Casts, i won’t charge you for it until the entire thing is a success. i’m expecting this one to blow you guys away, the whole team is putting a LOT of time and effort into it (from the sound, to the lighting, to the camera crews….it should be just gorgeous. can you tell i’m excited? i’m excited).
xxx
AFP
p.s. THE ACTUAL BOWIE TRIBUTE for which this is a warm-up, which is FRIDAY at radio city music hall, is ALSO BEING WEBCAST…but it’s not free, it’s $5 to charity. save that date too – if it’s worth $5 to you to see michael stipe, pixies, et all cover bowie songs! jherek & i will be doing “black star” with THE KRONOS QUARTET and on stage for all of 9 minutes. here’s the info for that one:
FRIDAY APRIL 1, WEBCAST FROM RADIO CITY MUSIC HALL with
MUMFORD & SONS
BLONDIE
PIXIES
MICHAEL STIPE
J MASCIS
RICKIE LEE JONES
ESPERANZA SPALDING
THE FLAMING LIPS
RON POPE
JHEREK BISCHOFF, AMANDA PALMER & ANNA CALVI W/KRONOS QUARTET
ANN WILSON OF HEART
THE ROOTS
THE POLYPHONIC SPREE
PERRY FARRELL
JAKOB DYLAN
HOLY HOLY
CAT POWER
DONNY MCCASLIN GROUP W/ MARK GUILIANA, JASON LINDNER, AND TONY VISCONTI
the webcast will require a minimum contribution of $5 to view and 100% of

proceeds will go to charitable causes. we don’t have the webcast URL

just yet but i’ll be sending updates here and twitter!

SURPRISE. it’s up on pitchfork, and coming to you in a few hours.

THE FULL BOWIE. thank you for making this happen.