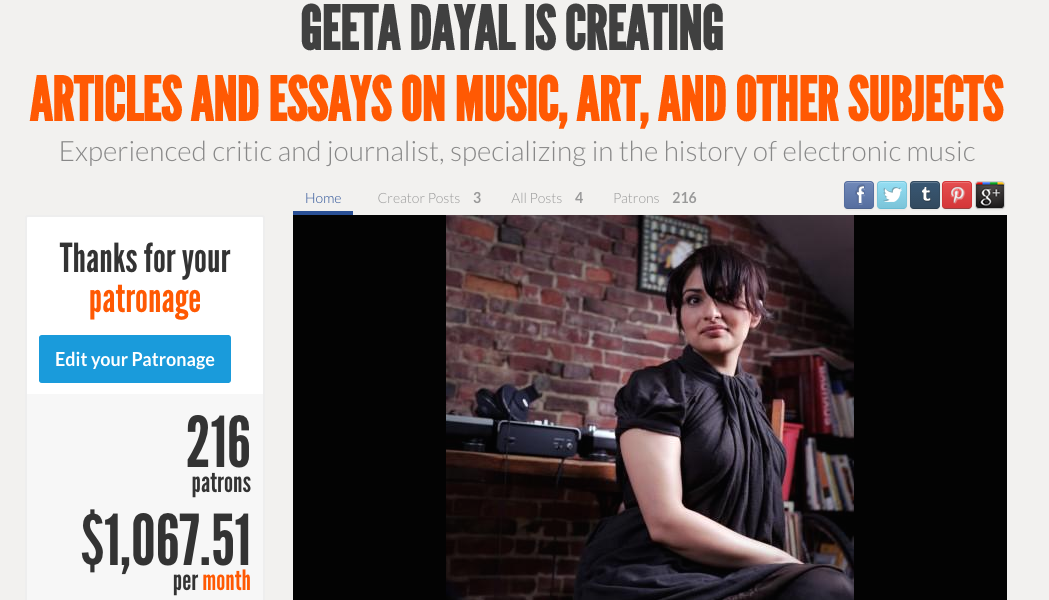 from the desk of WE ARE THE MEDIA: i give you geeta.

i’m here to ask you something.

TL;DR: you should support geeta dayal’s patreon. she is a professional music writer and critic, and my friend, who has struggled against the man for too fucking long and she’s decided to go it on her own so she doesn’t have to write shitty clickbait articles about shitty video games in order to support her habit as a real researcher and music journalist writing about the topics she thinks are important for the world.

*edit: since i posted this last night…over 100 people have supported geeta’s patreon. i’ve changed the image here to reflect the awesomeness.*

i spend a good deal of time promoting my own stuff, it’s time to talk about someone else. it isn’t often that i take time to devote a whole blog to somebody else’s project, but this one feels important and, in a sense, historic.

when i first heard about patreon, i found myself thinking: “yep…this will work for a certain thread of musicians, the kinds who don’t mind working in the fields with the fans and doing direct. but for journalists who have an audience and makers of *regular* web content, this is a fucking dream.”

many of my friends make regular web content that’s hard to monetize unless you’re working for a third party – a label, a magazine, a channel run by someone else. for the past year, i’ve been suggesting they use a subscription model like patreon. it works for people like tim ferriss (who makes his own podcasts direct for his fans), maria popova (who runs http://brainpickings.org and makes a full living wages directly from her readers…and she’s anal about posting a blog every. single. day…along with writing for the new york times and stuff ) and the many artists and content-makers who are here on patreon…..it’s becoming a thing.

there are some people, great artists and writers, who really are made for a system like this, and i’ve thought geeta was one of them from the start.

i met geeta back in around 1999 when i was a freaky statue in harvard square and she was running with a crowd of freaky people attending MIT (including my ex blake “yes-that-blake” brasher, who’s a painter, and our friend noah blumenson-cook, who’s done lots of film and video work with the dresden dolls).

she was one of those “i cannot believe how smart and cool and weird this smart person is” people…and it was obvious she’d go on to great, cool things. she was majoring in computer science.

to the dismay of her family, she ditched everything to become a writer. HOORAY! a music journalist, more specifically. she started writing for *real* newspapers and stuff. she slave don her work, she holed up and wrote, she chased jobs, she started specializing in her passion for early electronic music but wirting about everything from michael jackson to marilyn manson.

but it wasn’t until she wrote her first book, about brian eno’s “another green world” for the 33 1/3 series (http://www.bloomsbury.com/us/bria..), that i realized my friend was kind of a genius. (read it. it’s that good. even if you have no idea who brian eno is. it’s a book about art and process and coincidence and magic – and it was named one of the top 33 1/3 books by pitchfork.)

i was like: oh shit. she’s not just a good writer…she’s a fekkin GREAT writer. i was humbled. i even bought multiple copies of that book and gave them away as gifts. that good, people.

a few years into her real career, geeta started kvetching to me about the sorry state of affairs within the “industry” of newspapers and magazines. there was a real runaround, she said, and being a working writer was hell….running after checks owed to you, getting your writing cut down to nothing because of last-minute word count changes, not being allowed to select your own topics, the online publishing world of not being able to title your own pieces (“it isn’t clickbaity enough”), being a woman in an office full of men who dismiss you…and so on.

i remember being at a party somewhere when geeta texted me me to call her. i went to the garage, the only place i could get cell reception inside where i could hide and make the call. i’d never heard her so unhappy and freaked out. she’d been fired from the magazine she worked for, having already battled some rampant and irritating sexism there, because her articles weren’t getting enough “hits”, even though her writing was being hailed by some readers as the best long-form writing the magazine had ever seen. she was totally beside herself with anger and powerlessness and frustration.

a few years later i asked her to write a column for the “what aren’t you allowed to say” section of the new statesman issue that neil and i co-edited (http://www.newstatesman.com/polit..), and she wrote this:

I worked as a staff writer for a well-known publication (rhymes with “tired”) where I was constantly monitored based on how many hits my articles generated. While I tapped away madly, writing articles as fast as I could on one screen, another showed a red line that jumped up and down, terrify­ingly and unpredictably, showing how many people on the internet were reading my articles in real time. If something I wrote got above 200,000 page views, I received a small bonus, like a dog that had just won a treat. It felt like a journalism sweatshop – and, indeed, someone told me that our building had once housed an actual sweatshop, with underpaid immigrant labourers humming away on sewing machines, cranking out cheap clothes at breakneck speed. Now the sewing machines were Macs, but the concept was essentially the same.

One day, while finishing an article on robots, I was escorted to a cold office and told by a stern man who looked like an ­accountant that my articles, while “critically acclaim­ed”, were not getting enough hits. He pointed to a spreadsheet that showed I was near the bottom of the list in terms of page views. My articles were too long and well researched; I should have written more about cat videos, or live-blogged Apple product announcements. I left that day and never went back

after talking with geeta about six months ago and hearing her saying, more or less, “amanda, this world is crazy. i’m writing article for rolling stone and slate and i’m not making enough to pay my rent in san francisco, and i’m selling off my vinyl collection to buy food” i was like…”geeta, please use patreon. you’re a good enough writer and you’ll build a following. i’ll post about it if you do.”

so here i am, posting about it.

listen: i really do believe that a platform like this isn’t for absolutely everybody. there are writers and musicians out there who would rather work for a label, a magazine, be assigned stories, clock in and clock out, have a boss.

but for the people who don’t, it can be magic. what if we lived in a world where the best journalists of the world weren’t under the umbrella of the magazines, who are beholden to corporate sponsorship?

have you thought, for example, about the fact that if magazine x sells advertising to product x, they are never going to cover or tell the truth about product x? it happens all the time, friends: “BuzzFeed Deletes Post Critical of Dove, a BuzzFeed Advertiser“ http://tktk.gawker.com/buzzfeed-d..)

the only way that artists and writers will ever be able to work with freedom, or some semblance of it, is when we support them directly using these seriously awesome new tools…kickstarter, patreon, periscope, pledgemusic, beacon reader.

after i posted this to facebook, geeta gained a handful of new patrons, but you guys are different…you’re already here…you have accounts, the hurdle is hurdled, the hard part is done, your credit card info is already entered.

all’s you gotta do click on her link and give her a buck a month so she can explode into a future of awesome writing. she has a lot to say, and i want to hear whatever it is. i love reading her writing.

and on that note, don’t believe me…go read for yourself the kind of work (and the stature of outlets for which) she’s been writing:

there are lists of dozens (hundreds?) of articles and pieces she’s done here:

and here are some picks of here faves when i asked her:

….and her essay from yesterday, her first patreon-funded article on medium…a beautiful personal tribute to bowie. she was in india when she found out about his death:

….and here’s an interview with geeta on medium:

a  memorial piece she put together after robert ashley died, also for frieze:

fight the world of clickbait, here and now:

p.s. from the desk of “what other friends are up to”, brian viglione just released a his “scarlet sails” project today…he and his wife olya have teamed up to make an EP: