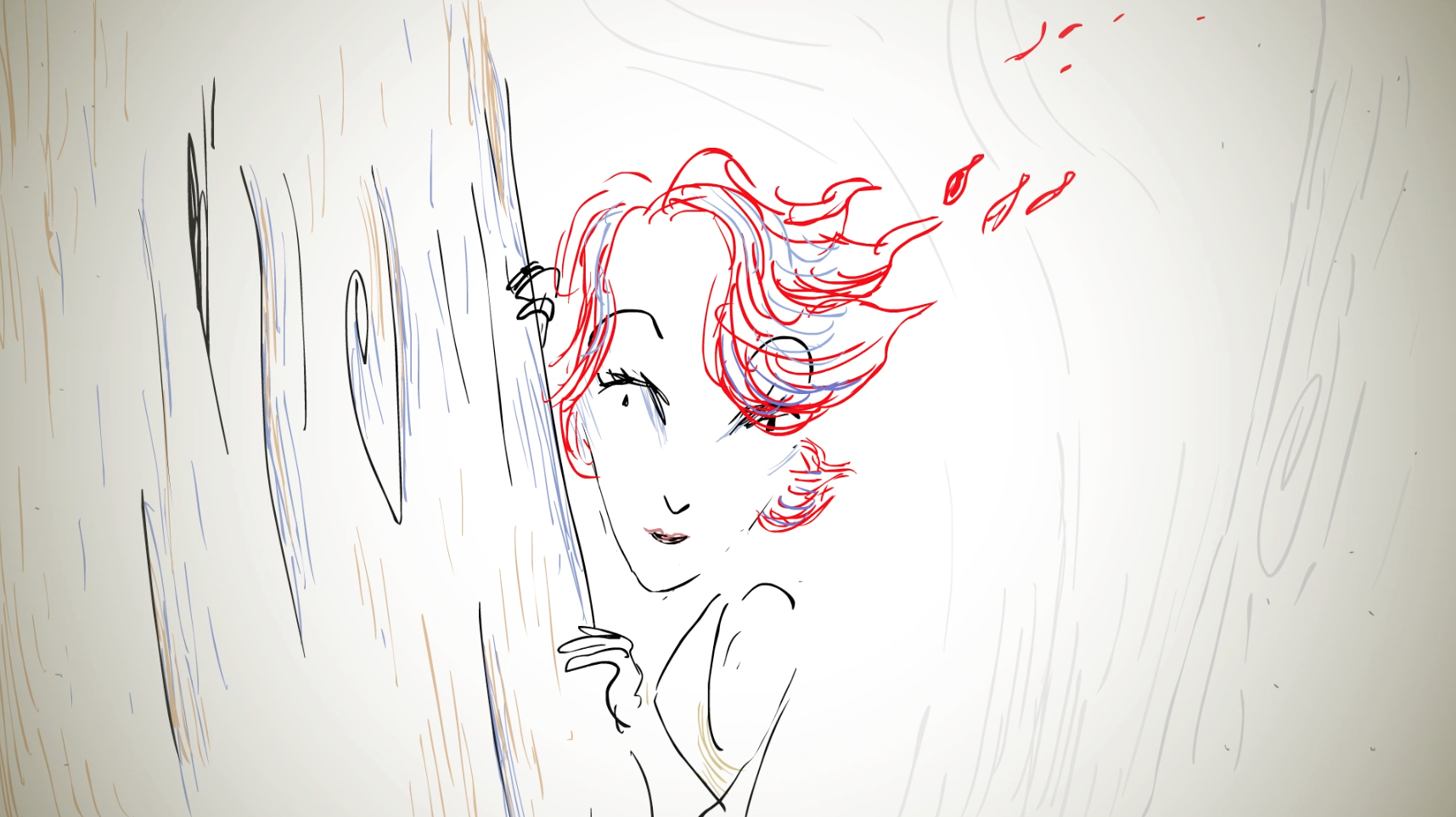 BEHIND THE TREES – my first animated Thing !!!

Oi! okay, i’m back in action….more or less. still a little under the weather, on antibiotics and probiotics and all the biotics but feeling way better.

thank you all for so much care and kindness and lymey-spiney advice over the past few weeks. i feel really loved. lyme disease is clearly a nasty nasty thing.

so many people with undetected chronic lyme have contacted me, offering to share their wisdom. i’ve been calling it the “silent rock star killer”. i knew about kathleen hanna,

and avril lavigne, but there are OTHERS. i want to start a super-group with all them called SubLyme. our hit will be “what i got”. ask me no further questions about this….

and now we can get back to business

but I’m really really proud of it, and i’ve been working on it in secret for months.

i tend to use the voice memo function of my iphone for all sorts of things – but mostly song ideas that i almost never come back to. i sing melodies or to chatter a lyric to myself, or to dictate a thread of an idea for a talk if i’m driving and can’t jot shit down. and mostly i never go back and listen to any of this shit. mostly it just stayed like so much urban-myth undigested bubble gum in the pit of some digital art-stomach for years and years.

this is not a habit i picked up once i had a smart phone. i used to just carry on these terrible habits with recording cassette walkmen, then for a terrible span of lost time in the late 1990s and early 2000s with minidisc, DAT, microcassette, and some weird nameless handheld digital voice recorder (I never really did figure out how to use any of them. I always missed my Walkman). the funny thing is, I have all my recorded Walkman tapes really organized. everything after about 1998 is a lost and disorganized mess. there’s no central filing system. there’s no single hard-drive. there’s just shit everywhere – old phones that died or were lost with recordings on them, song ideas I emailed to myself but never really put anywhere, leaving scores of ideas to be post to various laptops and abandoned email systems. it’s kind of a tragedy. but like my lost wedding dress and wedding vows (I know, I’m fucking terrible) I figure the passage of time flattens everything out. and maybe all those  songs were no good anyway. we will never know.

in desperate times back in the late 1990s, if I was somewhere and without a recording device, I discovered the handy-dandy trick of caking my own voicemail and leaving myself song ideas. those were all certainly lost to time, but I was actually more disciplined about retrieving them, because I knew they had a short life.

but all along I was, unwittingly, exercising whatever odd head-muscle must learn to *not* to feel foolish whilst humming nonsense words and half-baked rhymes in off-key whispers into phones at the the bottom of coat closets at friends parties.

and nowadays I just use my iphone.

now….fact: neil gaiman is a total weirdo when he’s half asleep. in a GOOD way, usually. you know all that cray shit he’s been writing for the past 30 years? it has to come from *somewhere*. the guy is a fleshy repository of surreal strangeness, and he’s at his best when he’s in the twilight zone of half-wakefulness. he’s the strangest sleeper I’ve ever slept with (let’s not get into who I’ve slept with…different animation) not just because of the bizarro things that come out of his mouth when he’s in the gray area, but because he actually seems to take on a totally different persona when he’s asleep. and when that dude shows up, the waking neil gaiman is impossible to get back, unless you really shout him awake. jekyll and hyde shit. if i ever get around to it, i want to write a neil gaiman instruction manual for whatever wife comes after me in case I die or we get divorced or whatever. i feel like it would make a good read in general.

to be fair, and in his defense: neil has pointed out that i sometimes talk in my sleep and i say some pretty insane stuff. but I’m never around to hear it, so, you know, i just have to take his word for it.

(i just texted and asked him to remind me of an example…he wrote back that i said “i want to go dancing and i don’t want them to take the sheep, don’t let them take the sheep”)

anyway, most of the time when he spouts some really surreal gems i just enjoy the carnival sideshow of Sleeping Neil and go off to sleep myself. but sometimes the shit is so good i write it down, mostly so i can tell him about it in the morning.

when I found this voice memo, I couldn’t even remember where we were when I recorded it…in a hotel somewhere, i think, and I am pretty sure i recorded it in the bathroom so i wouldn’t bug neil. maybe i recorded it the following morning. i don’t remember.

all I know is that I was looking for some other recording ages later and I saw this untitled snippet and played it back and thought it was hilarious.

and then I played it for neil and HE thought it was hilarious.

i’d been recently watching the “blank on blank” animations (if you don’t know them…they’re amazing. here’s one of my favorites, a janis joplin interview https://www.youtube.com/watch?v=VdF4b1_LQnQ) and was really inspired by what these surreal animators were doing with found sound recordings and interviews that were never intended to be animated, and i thought…this would such make a perfect animation.

i was at TED at the time I uncovered it – march of this last spring – and neil and i happened to be having dinner with maria popova (http://www.brainpickings.org/) and a random friend of hers. neil was so chuffed with the recording I’d found on my phone that he pulled out a set of headphones at the restaurant and said “play them the thing! play them the thing!”…and so i did, and i watched maria getting that delighted-yet-profound bulgarian look on her face. i mentioned it would make an amazing animation and it turns out that maria’s random friend was logan smalley, who runs TED Ed (http://ed.ted.com/), which is basically an amazing little factory of awesome educational animated clips. he said he’d help me find an animator…and along with fishing around and asking on social media, i landed avi ofer (this was the clip of avi’s  that really sold me: https://www.youtube.com/watch?v=ZQTQSbjecLg. you can see all his work here: http://www.aviofer.com/).

(a note here: i made pals with a handful of great animators who we didn’t wind up using…but many of them are excited to do stuff in the future. sooooo…i’m just saying. we could do more animated Things and i’d be happy as a clambake, and we’d get to give work to some super-talented artists).

so there we were. i hired avi, i dumped my basic ideas and vibe out in an email, sent him a bunch of reference clips and animations i liked, and we talked ideas and concepts on the phone and over email for a month or two. then he and his team got to work. they sent along their progress and every clip was like getting a little christmas present in my email, watching it take shape and grow….

I love what we ended up with. I hope you love it too.

in closing, this is the thing i actually love most about this story:

unlike the songs I’ve released here so far: this project wouldn’t have HAPPENED without the patreon.

animating is time-consuming, and the artists need to get paid to slave over their hot animating stoves.

and i know you guys love me and everything, but I also know what the market will bear as far as weird thing-content like this goes: if I simply fronted the money for this and then put it on YouTube with a nice little tip bucket at the bottom, it’d probably never recuperate a tenth of what it cost to make. likewise, if i fronted the money and then put it onsale, as a paywalled film on iTunes or whatever, it would be appreciated by a few hardcore folks….but locked and out of circulation. it couldn’t go on to live a happy healthy youtube and vimeo life, where animations belong so that they can be shared.

i know I’m also taking a risk, doing this one. there may well be people supporting the patreon here who are like THIS IS NOT THE THINGS I WANTED. if that’s you, i encourage you to speak up. i am listening. this whole patreon Thing-thing is, as I made clear at the outset, an experiment.

and for a moment, all you fine Patreon people, give yourselves a pat on the back. your support means that something now exists that never ever would have existed.

in a way, that’s priceless.

p.s. if you’re reading this and you’re not a patron, I enthusiastically encourage you to join HERE, especially if you’ve managed to read this far in the blog. when you join, these blogs and content will be emailed straight to your inbox, you can join the comments, and you’ll be joining a fantastic & supportive community of weirdos. and I’ll love you forever for helping me to Make the Things. patreon

p.p.s. you $3+ folks have a download link coming in a separate blog/email. watch for it. you $10+ patrons have a long overdue webcast coming your way. watch for that, too. patreon 4eva.

p.p.p.s. i just showed this clip to whitney’s roommate alexei and he alerted me to http://sleeptalkinman.blogspot.com/. oh my god. it’s an epidemic of mild-mannered british men who say weird shit in their sleep!

“behind the trees” – in case you didn’t get the email yesterday!