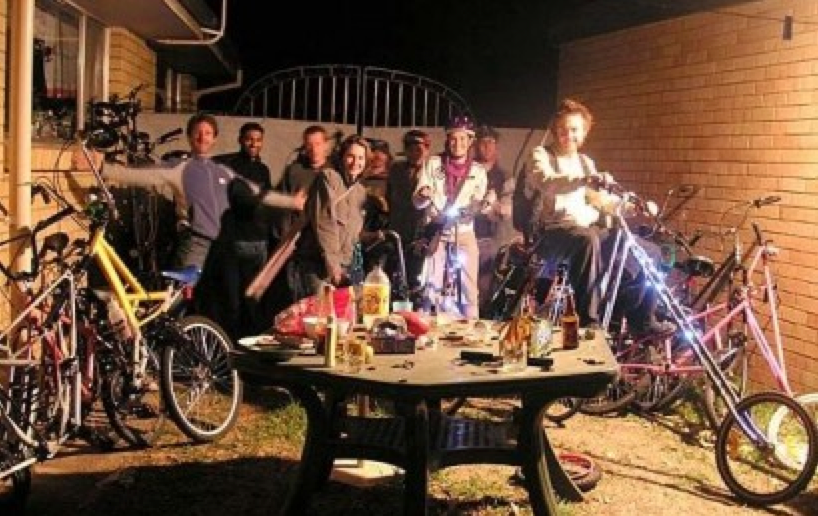 January 31, 2011
i’m in sydney right now, staying at DJ sveta and her girlfriend siri’s for my bad-ass mixing lesson.
i’m going to be DJing at a seriously special event in sydney towards the end of the month….but i’m going to wait to tell you about it – stay tuned. but save feb 27th

my gig won’t be a clubbing/bumping/grinding gig…but i *MIGHT* be doing some serious DJing around mardi gras if i get lucky….

here’s sveta – teaching me how to beatmatch. we’re using “when doves cry”: 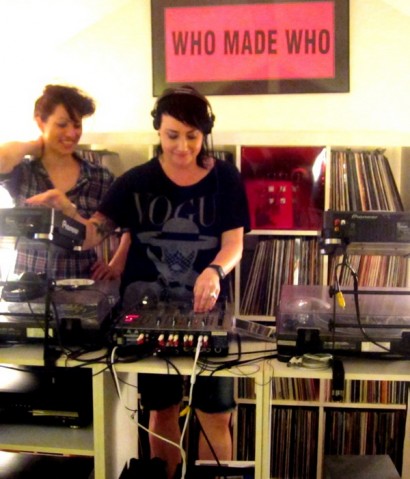 god the woman is awesome. she’s a HUGE international DJ, but especially big in australia – she always DJs the giant mardi gras party that pretty much everybody gay on the planet comes and loses their SHIT at. we’re crashing tonight at her house in sydney with her, her girlfriend siri, and their two incredibly loud and adorable sausage dogs, kinski and kraka. siri coked us an amzing meal bought from the local fishmonger and we spent a long dinner talking feminism, gender-problems, parents, and life in general. they’re amazing fucking people – i can’t stop feeling how lucky i’ve been lately with the people australia seems to deliver to my universe. excuse my lack of english on this blog. i’m really fucking tired. information only, typed lazily with love and exclamation marks.
!!!!yes.
and?
eric and i are HIGH after SLAMMING show in newcastle, australia…which is about 3 hours outside sydney.
first of all, our ride there was EPIC – best. ride. ever.
instead of telling you about it, i’ll let you read the fantastic blog our volunteer charioteer wrote about it, because he’s not just a terrific charioteer, he’s also an excellent writer.you can read all about it (and see some pics), on his blog at geekofoz.com
and of you’re wondering what we talked about on the ride…he was good enough to break our conversation topics down into a pie chart: 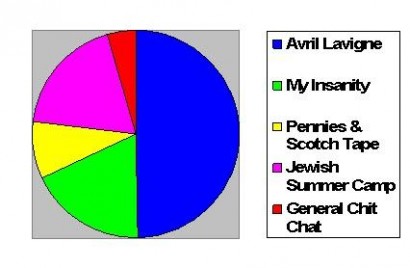 …i hope we get to see him again in sydney. and good god i’m finding love here at a rapid rate.
speaking of love, nick cave talked about me on the radio today and said my cover of “the ship song” was beautiful. when will the awesome stop?
love last night, newcastle-style:
mikelangelo and phil (AKA The Great Moldavio form the black sea gents) came, played their asses off and acted as my back-up band, kim boekbinder (and her boy jim batt, who’s a melbourne-based filmmaker) came along too and played along, and tom & jen, aka the jane austen argument, came along as well.
mind you, i put this show together a matter of WEEKS ago – and ALL my fucking friends managed to make it.
i call this traveling circus to ORDER, people, and last night we were in full effect. the show was electric and sweaty as hell – which i always love.
the dressing room was absolutely stunning – it was a pigeon-poop covered corner of a derelict ballroom above the venue. jim grabbed a photo of me right after dinner…. 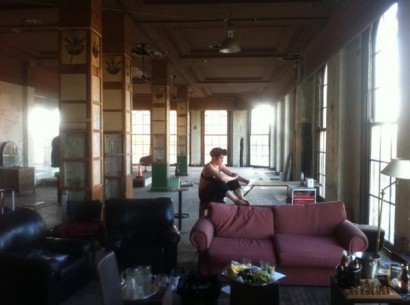 and we explored the upper floors of the venue. the entire place was a pigeon palace – four whole floors of abandoned, gloriously-spooky hotel with dust and light colliding in absolute splendor. we all commented that it looked like a film set just aching to be used, and it felt wrong to just be sitting there, applying make-up and drinking beers when we should have been making a sequel to “the shining”.
here’s an old photo of the place, from the 30’s… 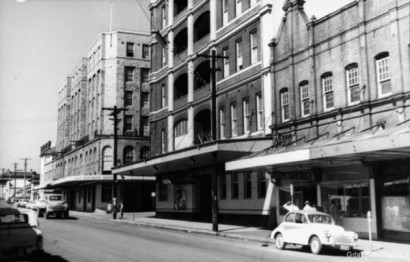 via richard milne/gdaypubs.com.au
after the gig, the venue locked us into the building, we drank beers, and me & eric crashed on beds that they had up in the office, squatter-style.
i woke up the next morning to a text from jim, who convinced me that we MUST MUST MUST shoot a music video for “in my mind” in the dead ballroom before i left.
my train was in an hour. i told jim to get his ass over pronto. music videos CAN be shot in 15 minutes. but not this one. it GREW.
jim shot with his single camera, i grabbed costumes, and the ninja-video-shoot was in full swing as we ran around the hotel, embracing the hazey light, the pigeon poop, and the pigeon corpses.
here we are, somewhere in the midst of shooting: 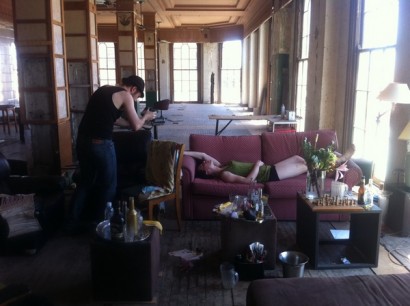 we made, i think, a pretty fucking amazing video for only having 2 hours and no fucking plan. jim’s editing it as we speak. update soon.
______________
so, a few weeks ago i was talking to a young journalist, katina – from the canberra times – who was interviewing me for an article.
she mentioned that she had a friend in a bicycle collective in canberra, and her friend had an idea…..
the answer?
we know the answer, comrades.
the official show in canberra is SOLD OUT…and we’re adding a NINJA GIG, but not just ANY FUCKING NINJA GIG….
we’re doing an DIY-BICYCLE COLLECTIVE NINJA GIG AND BIKE RIDE in cooperation with the DIY-bike outfit RAT PATROL! 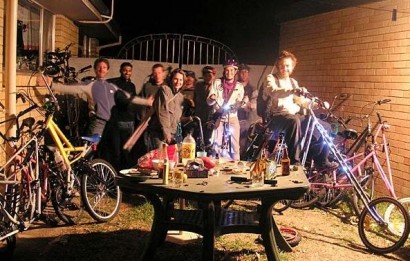 where do i start with this? our main contact is a man named nancy porker.
our other rat-friends are named angle ironhead, schloppy whaxoff, monocle chunder, bloody mary, busta wonky, darf bender, leaky beaver, cunstable willy shonka. need i say more to sell you on coming to this ninja bike ride?
i think not.
it will take place TOMORROW, WEDNESDAY Feb. 2nd, in CANBERRA -
BRING A BICYCLE AND BE READY TO RIDE AND CHANGE THE UNIVERSE.
the whole thing will basically be a combo ninja gig and ride with Rat Patrol. come one come all and bring your wheels (and yes, yes, it’s FREE)!
we’re gonna meet up at 6:00pm for a hell ride to Garema, then off to Aspen Island in Lake Bulry Griffin WHERE WE WILL BARBECUE, accompanied by the dulcet sounds of local gypsy cabaret band, Mr Fibby.the fibbynites: 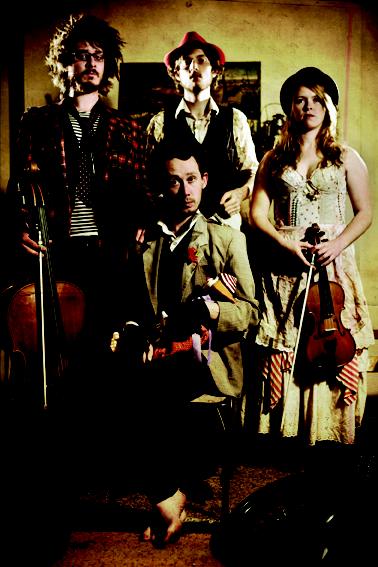 i’ll start uke-ing my uke of fire around 8:30pm if you’ve missed the ride….just come!
but we prefer you ride your bike. bring FOOD! and drinks!
AND bring bathing suits for night-swimming! we will get wet as fuck!!! i can’t wait.
and regarding rat patrol…..
what are they about? here’s their site, go look (there are some AWESOME pics), but their manifesto is clearly so awesome i’m going to recycle it into my blog:
We are a non-profit thang and have build days regularly to re-use steel and other, by way of making bikes using power tools and drinking beer.
Rat Patrol is a leaderless, community-based, non-political global bicycle collective. Rat Patrol Oz is one of many Chapters around the world. Our beloved Chapter in Oz is fortunate to have a diverse cross-section of Rats that are inclusive, fun-loving, not aggressive and constructive — it’s these beautiful people that form our positive community character. We hold Build Days, Rat Rides and bike events that anyone can attend…but it’s not about being cool. FIRST, you have to read the Rat Patrol Manifesto (below) and be at least vaguely thinking along these lines.
THEN talk to us, but first remember that you must complete your own mutant bike without a serious drink tool-using accident preventing you from doing so, AND get through your Rat Induction…
And then, you should ask yourself “why?”……….
Rat Patrol origins
Theory has it that Rat Patrol has a long and glorious history, which can be traced back to Adolph’s Rat Brigade, of the late 19th century… that’s right, around 1880. Yes, that is quite a while ago. The ‘movement’ seems to be a reaction at that time to the increasing dominance of the modern-style “safety” bicycle. Some of the earliest members of the club are profiled on the RPBC Speculative History page, and even features Johnny Payphone’s great-great-great grandfather, Fletcher “Jaunty” Payphone. He does rather look the part too — what a cad!
In March 2005, Rat Patrol’s agressive international recruitment was directed at the continent of Australia and surrounding islands, where Scallywag sculls were reported to be making raids upon New Zealand. Disturbing reports from the bush included terrifying accounts of tallbike fire jousting between ‘Wags and local press gangs (see right). Efforts were made immediately to quash this threat by establishing a base on the mainland, using ‘volunteers’ from the local penal colony.
June 2005
Two months later, Rat Patrol HQ received this encouraging correspondence via homing-rat:
G’day Johnny,
I’m sure the message has past to you via the troglodytes that a new infestation is in it’s infancy in the penal colony of Oz. And if current trend data is anything to go by, the infestation should be reaching plague proportions in no time.
The swift rate of spread can be attributed to an incredibly infectious strain of rat bikes beginning to emerge in the Canberra region and their propensity to intrigue and bemuse bystanders. Bystanders seem unable to resist riding bikes when offered or when they can no longer resist asking for a ride, and once initial contact has been made, infection rates are in the magnitude of 97%.
Aside from the automobile, there are no other natural predators to rat bikes in these parts, a phenomenon common to introduced species in Australia. One only has to look at the success of other introduced species such as the common fluffy breedaholic rabbit; the prickly pear; the cunning mangy red fox; the beer swilling, gun toting, redneck; and of course the beautifully grotesque cane toad, to see the potential a rat infestation could have in this country.
The half-licked icing on the discarded slice of cake found in the parliamentary dumpster is that this infestation has propagated itself in the midst of our nation’s capital. One theory is that the strain of rats have been feeding on the inordinate amounts of waste (some definitely radioactive, and all of it definitely stinky) emanating from our halls of parliament.This endless supply of freaky trash has given rise to a form of super rat, that some predict will swarm upon parliament and sign the Kyoto protocol on behalf of our inept politicians, and probably eat their carcasses while they’re at it. This will serve to eliminate the rat’s only real predator, the automobile, and then the rat (avec rat bike), will surely take it’s place alongside other notorious infestors such as the cane toad.
Those Scallywags will be sorry they even considered an incursion onto Antipodean soil. Don’t know what they were thinking – I mean, who would want to invade New Zealand?!? Still, each to their own, eh?
Get ready to pay the price Scallywags!!!!!!!
Yours in filth,
RPoz
and the rest is skank history!
come one, come all, and tell your friends
see you there, betches
XXA
Back to Blog
« Previous Post
Next Post »